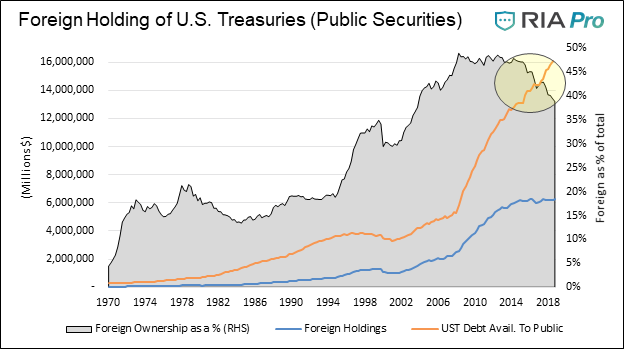 In, The Lowest Common Denominator, we quantified the extent to which growth of consumer, corporate, and government debt has greatly outstripped economic growth and our collective income. This dynamic has made the servicing of the debt and the ultimate pay back increasingly more reliant on more debt issuance.

Fortunately, taking on more debt for spending/consumption and to service older debt has not been a problem. Over the past twenty years there have been willing lenders (savers) to fund this scheme, even as their reward, measured in yield, steadily declined.

Unfortunately, two of the largest buyers/holders of U.S. Treasury debt (China and the Federal Reserve) are no longer pulling their weight. More concerning, this is occurring as the amount of Treasury debt required to fund government spending is growing rapidly. The consequences of this drastic change in the supply and demand picture for U.S. Treasury debt are largely being ignored.

In our article, Triffin Warned Us, we provided a bit of history on the Bretton Woods Agreement. This pact from 1944 essentially deemed the U.S. dollar the world’s reserve currency. As a result of the agreement, foreign nations rely heavily on U.S. dollars for all types of international trade. For instance, if Uruguay sells widgets to Australia, Australia will most likely pay Uruguay in U.S. dollars. Because of the reliance on dollars for trade, Uruguay, Australia and almost every other nation holds reserves of dollars.

Foreign entities with dollar reserves maximize the interest they earn on reserve accounts with the objective of taking as little risk as feasible. Think of reserve accounts as savings accounts.  As such, foreign reserves are most often invested in “safe” U.S. Treasuries. As world trade has grown over the years, the need for dollar savings has grown in step and has resulted in more lending to the U.S. Treasury by foreign governments.

Recently the incremental appetite from foreign buyers, both private investors and governments, has declined. Prior to the last two years, the last instance with flat to negative growth over a two-year period was 1999-2000. During that period, the amount of U.S. Treasury debt outstanding was shrinking, and despite a decline in foreign ownership, foreign ownership as a percentage of bonds outstanding rose.

The graph below charts the amount and percentage of foreign holdings of public U.S. Treasury debt outstanding (excluding intra-governmental holdings such as social security administration investments), and total public debt outstanding. As highlighted, the divergence occurring over the past few years is without comparison in the last forty years. As a point of reference, the last time foreign entities meaningfully reduced their holdings (1979-1983) the ratio of U.S. Treasury debt to GDP was less than 40% (currently 105%). Needless to say, the implications of a buyers strike today are quite different.

During the financial crisis and its aftermath, government spending and debt issuance increased sharply. From 2008 through 2012, Treasury debt outstanding increased by over $8 trillion. This was three times as much as the $2.6 trillion increase during the five years preceding the crisis.

Faced with restoring economic growth and stabilizing financial markets during the crisis, the Federal Reserve took the unprecedented step of lowering the target for the Fed Funds rate to a range of 0-0.25%. When this proved insufficient to meet their objectives, they introduced Quantitative Easing (QE). The implementation of QE had the Fed purchase U.S. Treasury securities and mortgage-backed securities (MBS) in open market operations. By reducing the amount of bonds held publicly they reduced Treasury and MBS yields which had the knock-on effect of lowered yields across a wide spectrum fixed-income securities. After three rounds of QE, the Fed had purchased over $1.9 trillion Treasuries and over $1.7 trillion MBS. At its peak, the Fed owned 19% of all publicly traded U.S. Treasury securities.

In October 2017, the Fed began balance sheet normalization, the process by which they reduce their holdings of U.S. Treasuries and MBS, in what is colloquially known as Quantitative Tightening (QT). Since then, they have reduced their Treasury holdings by over $200 billion. Although they have been shedding $50 billion a month between U.S. Treasuries and MBS, they intend to reduce and halt all reductions by the end of September. The following graph shows the size of the Fed’s balance sheet as well as its expected decline. 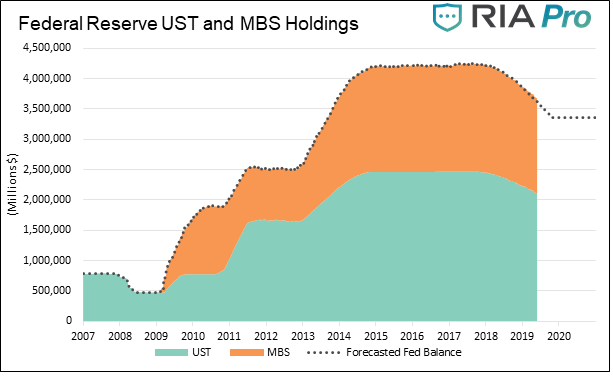 The Fed and Foreigners are MIA

As discussed, the Fed is reducing their U.S. Treasury holdings and foreign entities are not adding to their Treasury holdings. This reduced demand is occurring as the U.S. Treasury is ramping up issuance to fund a staggering $1 trillion+ annual deficit. The CBO forecasts the pace of heavy Treasury debt supply will continue for at least four more years. 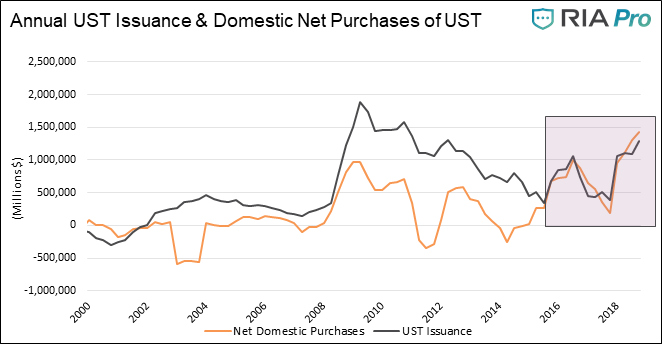 As highlighted in the yellow box, domestic purchases have indeed taken up the slack. The graph below shows investor breakout of net purchases from 2000 to 2015. 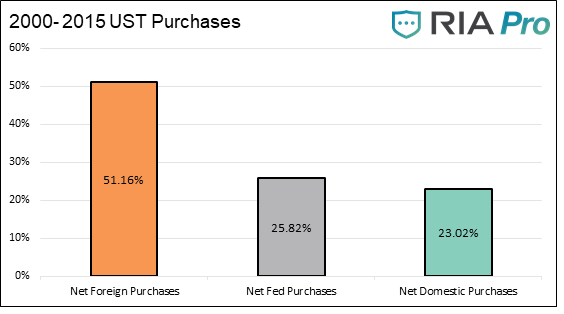 Note that domestic investor demand accounted for roughly a quarter of the Treasury’s issuance. Now consider the period from 2016 to current as shown below. 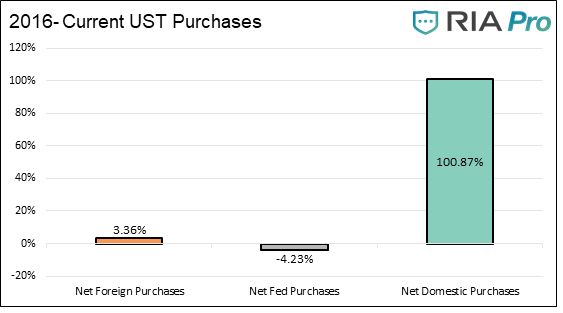 Quite a stark difference! Domestic investors have bought over 100% of Treasury issuance.

This leads to two important consequences worth considering.

Now, before answering those questions here is the punch line. According the Office of Management and Budget (OMB), Treasury debt is expected to increase by $1.086 trillion in 2019. As the Fed modifies their balance sheet reduction but does not resume buying, and foreign entities remain neutral, domestic savers will still be on the hook to purchase at least the entire $1.086 trillion in U.S. Treasury securities in 2019 alone. Looking beyond 2019, net debt issuance over the next ten years is expected to average $1.2 trillion per year, and that forecast by the CBO, OMB and primary dealers does not include a recession which could easily double the annual estimate for a few years.

The bottom line is that investors will need to consume less and shift from other assets into U.S. Treasuries to match the growing supply. This presents a big problem for equity investors that are buying assets at record high valuations and are unaware of, or unconcerned with, this situation.

Just because something has gone on for what seems to be “forever” does not mean it will continue.

Deficits do indeed matter. The post Bretton Woods agreement formalizing a fiat currency global system had the support of all major developed world nations. Against better judgement and a lack of understanding about the implications, monetary policy was fashioned towards ever larger debt burdens. The story plays a bit like an old Monty Python skit:

Cleese: “The amount of debt we owe is creating a problem, sir.”

Cleese: “But the amount of debt outstanding can no longer be described using numbers and we have no way of paying the interest.”

Gilliam: “Are you an idiot, man? We’ll issue more debt to pay the current debt we owe, of course!”

Cleese: “But we’ve been doing that and the problem keeps getting worse and you say the same thing!”

Chapman: “Is that a penguin on the telly?”

Now that we actually have to fund our debt, the reality is hitting home and diverting attention to “penguins on the telly” will do us no good. If foreign investors remain uninterested and the Fed avoids restarting QE, this situation will become much more obvious. Regardless, history is chock full of warnings about countries that continuously spent more than they had. Simply, it is completely unsustainable and the investment implications across all assets are meaningful.

Van Den Berg On Worldwide Quantitative Easing Presentation at the Value Investor Conference. Check back for more presentations, or sign up for our free newsletter to get all the... Read More

Hedge Funds Year-To-Date Returns In Positive Territory For First Time In 2016 by Preqin Overall returns of 1.44% in April move hedge fund performance to 0.70% for 2016 YTD The Preqin... Read More

Moshinsh Pabrai on Compounding and The Dakshana Model - go listen to 6:30-19:30 or so for a nice segment on the topic of compounding and saving Also see 300+ Book Recommendations... Read More

Out Of Many, One? Household Debt, Redistribution And Monetary Policy During The Economic Slump by BIS Amir Sufi University of Chicago Booth School of Business and NBER Andrew Crockett Memorial Lecture June 2015 Abstract During... Read More