If you examine the portfolio of the Daily Journal, run by Berkshire Hathaway (BRKB) Vice Chairman Charlie Munger, you will see three main stocks. In 2009, near the market bottom, Munger purchased shares of Wells Fargo (WFC), Bank of America (BAC) and U.S. Bancorp (USB). When Munger made these investments, most market participants were scared out of their wits and were the most scared of bank stocks. When you listen to Munger talk about stocks, what you hear is a call for great patience to wait for what he calls “easy ideas” to invest in.

We believe in his theory and recently had an opportunity to buy into shares of Occidental Petroleum (OXY). Past performance is no guarantee of future success, but we will argue that buying OXY here is as easy as buying JPMorgan Chase & Co. (JPM) in 2012 after the “whale-trade” losses, buying American Express (AXP) in 2015 after they divorced Costco (COST) or buying Target (TGT) in the aftermath of Amazon entering the grocery business.

Occidental Petroleum has provided us with three huge insider buy signals over the last two months. One of our eight criteria is strong insider ownership, preferably with recent insider purchases. First, the company outbid Chevron (CVX) to buy Anadarko Petroleum (APC), in a deal made up of $59 per share in cash and .2934 shares of OXY stock. To finance this purchase, Warren Buffett, Charlie Munger and Berkshire Hathaway are providing $10 billion in the form of a preferred stock paying 8%. In addition to the preferred stock, the $10 billion came with 80 million warrants to buy OXY at $62.50 per share.

Third, Carl Icahn, who owns 4.4% of the outstanding shares of OXY, is screaming bloody murder about what he calls Buffett and Munger “taking OXY to the cleaners.” Translated into English, this means, “why did you give him dramatically better terms in his ownership of this undervalued set of assets than I got?” Icahn is a mega-successful investor and his frustration makes us salivate.

Overall, the voting machine called the stock market hates this deal, because it is one value stock buying another value stock in a stock market that hates value stocks. OXY spent the year prior to the bidding for Anadarko trading between $60 and $84 per share. Fortunately, we get to read between the lines and are conscious of how huge a point in time this is for buying into the energy business from a historical perspective. In the chart below, you can see how unloved the energy sector is in a bull market which has been going on for ten years. 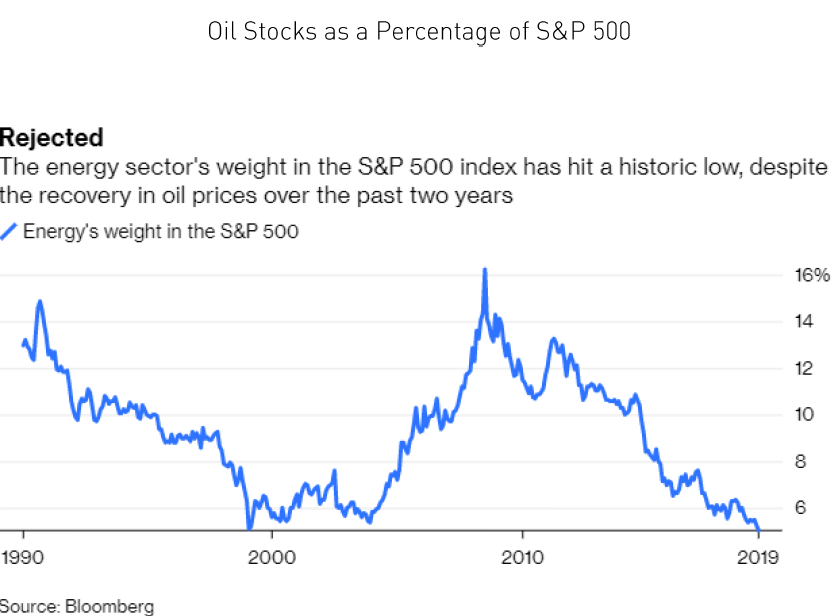 Occidental Petroleum fits seven of our eight criteria for common stock selection, with its balance sheet strength being the only laggard. We will accept too much debt while they monetize $10 to $15 billion of their assets in Africa, the Middle East and in the U.S., as they also apply Buffett’s money to the cash part of the APC acquisition. We will not collect 8% like Buffett and Munger, but we are paying dramatically less for the common stock than Berkshire would pay (and what Icahn Enterprises paid). We also get a 6% dividend while we wait for the shares to regain favor in the stock market.

When JPM suffered from the “whale trade” and the stock traded for $34.50 per share in July of 2012, two things made buying it easy. First, banks were the smallest part of the S&P 500 they had been in decades. Second, CEO Jamie Dimon bought $13 million worth of JPM shares in the open market. I had worked with him for years in the 1990s at Smith Barney and had known him to be a straight shooter. At the time of this writing, JPM shares traded around $115.39 and have pumped out copious dividends over the last seven years.

American Express is a business we had always wanted to own, but the shares always seemed to be in an uptrend. When they announced in 2015 that they were no longer going to be Costco’s branded credit card issuer, the stock immediately plummeted from $98 to the low $70s. Divorcing Costco was the moral equivalent in the stock market of divorcing the world’s most popular actress, Sofia Vergara. We bought some shares in the low $70s, and bought more once it drifted down to $64. It bottomed in the low $50s, but by then we had run out of money. Today, four years later, AXP trades for around $126.62 per share and has a very bright future as millennials become the dominant driver of future U.S. economic activity.

Lastly, Target is quite the entertaining story. Amazon’s beta tests for their Go stores on the grocery side were going miserably in Seattle. Since this was true and Amazon felt that investors needed to believe in their ongoing revenue growth story, they instead bought an old broken-down former growth glam company, Whole Foods. Investors invited the Justice Department and the FTC into Amazon’s life by slaughtering everyone in the grocery space in the spring of 2017. Even the sacred Costco saw its shares decline to $150 per share in that episode.

Target was just beginning to heal and reemphasize their strengths in the marketplace by renovating their stores in the aftermath of a disaster the previous decade in Canada. The shares of Target dropped to the low $50s and our analysis told us that it was the cheapest it had been since the lows of 2009 on a series of price metrics. We backed up the buy truck.

Since then, their remodels have been successful, their online business is flourishing, and the company is benefitting from its 1,853 locations and the affection shoppers have for their discounted chic. The shares have rebounded nicely since then and at current prices TGT trades at a below market price-to-earnings ratio and pays an above-average dividend of 3%.

Munger would tell all of us to be more patient and wait for these psychological extremes to buy meritorious businesses. He would describe these low prices for wonderful companies as being “easy” compared to trying to guess the future in growth stocks or by trying to buy stocks way below their liquidation value like Ben Graham taught. If Buffett, Munger, Icahn and a slew of insiders at Occidental Petroleum are correct, buying OXY here is “easy.”

Netflix's International Expansion Is Proving To Be Very Costly

With Netflix, Inc. (NASDAQ:NFLX) readying to announce its third quarter earnings after the bell on Tuesday, analysts have already been asking questions on whether the company's international expansion is... Read More

Jeff Gundlach Ira Sohn coverage brought to you by ValueWalk. Jeff Gundlach is Chief Executive Officer and Chief Investment Officer of DoubleLine. Jeff Gundlach was formerly associated with TCW where he was... Read More