Starvine Capital Corporation commentary for the half year ended June 30, 2019.

The first half of 2019 saw a bounce in equities following a tough final quarter for markets in 2018. In H1 2019, fully invested accounts in the Starvine Flagship Strategy increased 12.1% to 12.2%, while fully-invested accounts in the Mid-Large Cap Strategy increased 12.7% to 12.9%. During the period, the S&P TSX Total Return Index increased 17.1% and the S&P 500 Total Return Index increased 13.9% in Canadian dollars (18.5% in USD).   The movement in the exchange rate over the first half is estimated to have negatively affected performance by 1.3% to 2.4% as U.S. listed equities still comprise 62% and 34% of the Flagship and Mid-Large Cap strategies, respectively, while the U.S. dollar depreciated -3.9% over the period.

For the half year period, one new position was established in both strategies in the first quarter, and only a minor rebalancing from one holding to another was done during the second quarter.

The rebound in account values has thus far been less than expected after a sharp sell-off at the end of 2018. Contributing to this dynamic is the presence of certain contrarian positions whose share prices decreased during the second quarter. However, from an earnings power perspective, the progress in these larger positions has met my expectations. Said differently, I believe there is a growing disconnect between the market value performance and fundamental progress of the strategies as represented by free cash flow growth. While the indexes hover near 52 week highs, the Flagship and Mid-Large Cap strategies trade at 19.9% and 17.5% discounts to the underlying securities’ 52-week highs on a weighted average basis, respectively. Approximately 76% of the market value of the Flagship strategy trades at a 12.9% free cash flow yield (or 7.8x FCF) based on current run-rate numbers, which is significantly cheaper than the indexes. The remainder of the strategy trades at a discount to net asset value (NAV), which tends not to be as readily calculable and requires more assumptions. I expect the intrinsic value per share of the average holding to grow in the high single digit percentage range over time. A recession in the near term would derail the collective growth path in earnings power, but likely only on a temporary basis.

Overall, I am positive about the positioning of the strategies. Valuations are quite cheap, yet if the collective earnings power delivers at a high single digit growth rate, the compounding should happen at a decent clip irrespective of whether multiple expansion occurs. This assumes valuation multiples in the strategies do not meaningfully contract going forward from already depressed levels (which is entirely possible in a market sell-off). On that note – and at the risk of sounding like a broken record – I view each strategy as a coiled spring that will only become more coiled if prices do not increase commensurately with earnings power.

In late 2017, I wrote a little piece with the intention of helping readers to understand the basic underpinnings of value. Close to two years later, it can be observed that growth has delivered much better results than value as a general investment style. Looking at the iShares S&P growth and value indexes for the 2, 5, and 10 year periods ending June 30, 2019 on a gross (i.e. non-annualized) basis, it is clear that value has been left in the dust: 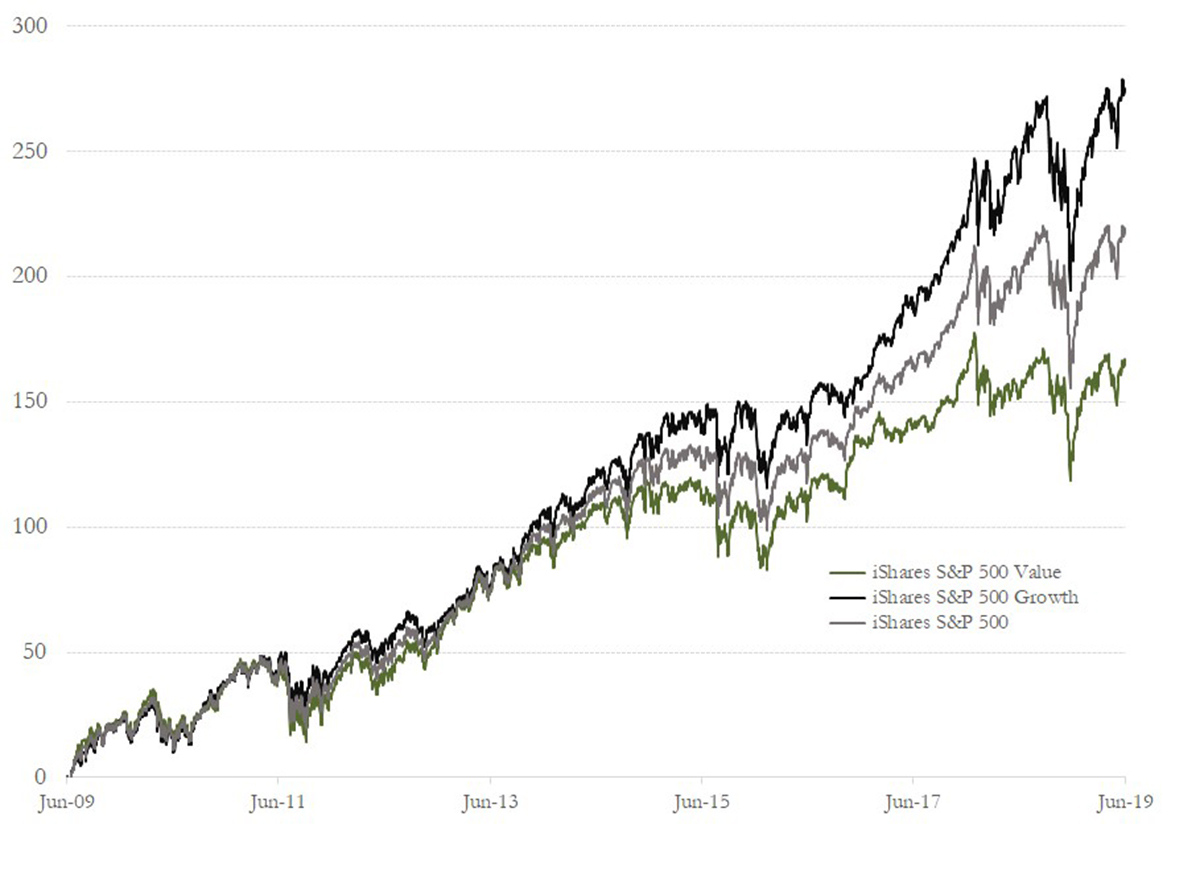 The value index selects stocks based on valuation ratios of earnings, book, or sales, while the growth index considers sales and earnings growth, and momentum. If these indexes are valid as representatives of the two general categories’ performance over the past several years, we can say there has been a strong disparity at work. The growing dominance of a group of U.S. technology related businesses is commonly associated with the outperformance of the growth camp. These companies, although widely acknowledged as having strong moats in network effects, do not register on the radar screen of most value investors because they do not trade cheaply on metrics like price-earnings or price-book ratios.  That isn’t to say with conviction that they are overvalued or that they do not deserve the values assigned by the market. What I do believe is that every dollar of market capitalization must ultimately be supported by free cash flow.  The proof will always be in the pudding. During periods of high growth for a given company, investors may abandon “close to the ground” traditional valuation for market potential. But when the growth rate of these mega-caps slows down, watch out…

Whatever one’s stylistic investment preferences may be, there is an indisputable fact: The more we pay, the lesser our return. Conversely, the less we pay, the higher our return – ceteris paribus. Even if one buys only high quality companies, it is still critical to be sure the price is favorable in relation to future earnings power. Price is always paramount.

If we were to sample a broad array of investor letters from asset managers over the past few years, we would come across numerous writings exploring trends that are distorting the market’s ability to act as a mechanism to join price and intrinsic value.  In particular, the gaining popularity of passive indexation and machine driven trading are often cited for the relative underperformance of value strategies over the past decade.

Could the increase in automated trading and indexation really be the culprit? A Wall Street Journal article in December 2018 outlined that up to 85% of trading volume can be accounted for by entities that do not transact based on companies’ fundamentals. If such an overwhelming proportion of trading is driven by non-fundamental triggers, does this mean we are in a ‘new normal’? As investors continue migrating their savings from actively managed strategies to ETFs (electronically traded funds), a self-reinforcing trend is taking hold. Off-index names undergo selling pressure as investors switch into ETFs. Conversely, the largest constituents in the S&P 500 absorb a disproportionate amount of the ETF buying; these fund flows serve to create selling pressure for managed strategies while providing a tailwind for the largest constituents in the indexes. Investors see the underperformance of active strategies, which spurs more selling – and the dynamic becomes a negative feedback loop.

Even in today’s world of more information and company disclosures than we can process (thanks to the internet), significant and persistent dislocations between price and value abound.  I recall speaking to former colleagues who shared stories of riding the subway to public libraries in the late 1980s to obtain company financial statements before everything became available on the internet. With such slow dissemination of data, it makes sense that price would take longer on average to travel to value. And yet today, with data being transmitted literally to our fingertips, stocks can still remain depressed far longer than warranted.

One team that has harvested this inefficiency is Brookfield Asset Management. The CEO, Bruce Flatt, releases quarterly letters that are rich in ‘investment nutrition’. In his Q1 2019 letter, Flatt outlined recent acquisitions of great businesses for reasonable prices, stating that “in many cases, investors are frustrated and fatigued, and therefore choose to move on at a reasonable premium to the share price.”  Even at this late stage in the market cycle, entire sectors and certain companies remain out of favor and statistically cheap, though it is important to note single-digit P/E stocks typically do not trade that low for no reason. Thus it is more important than ever to keep checking the soundness of assumptions placed into our valuation work.

At the tail end of the letter I published in January 2019, I shared Einstein’s alleged quote, “Everything should be made as simple as possible, but no simpler.” Investing can be thought of as difficult and simple at the same time. When it seems difficult and uncomfortable (e.g. Q4 2018 is a recent memory), it is likely to seem less difficult or perhaps even easy in the near future. Vice versa, when investing seems easy, we are likely to be humbled yet again when least expected.

To say we should keep things simple by focusing on long term fundamentals and buying only on a value basis would be stating the obvious. Committing to stronger objectivity may not translate directly into less frequent transacting, but in my opinion that is likely to be the outcome for most investors. Less can be more. We need to arrive at the idealistic balance of being rigorous enough in our analysis, yet intentionally dispassionate in our trading activity.

Owning a share of a company means benefitting (or losing) on the future earnings stream of the company, depending on how much the earnings grow (or decline). The question is whether we can identify the winners: which ones will achieve exponential growth of earnings in the long term via successful reinvestment of cash flows? And can the purchase price as reflected in the stock price be secured at a low enough level so as to achieve an investment return commensurate with the earnings growth? Or better yet, can we buy at prices low enough so as to lock in returns higher than what will prove to be the eventual growth rate in earnings power?

Current events deserve a permanent share of one’s headspace, but we must put everything in its right place. Our primary focus should be the identification of quality companies whose management teams are able to reinvest earnings back into the company at good rates of return. If that is achieved, the long term result should be satisfactory.

Some small and mid-sized endowments and foundations are questioning the value of an “Endowment Model” portfolio that includes uncorrelated alternatives instead of a blind 60/40 portfolio of stocks and... Read More

Unemployment changed very little in May according to a Bureau of Labor Statistics summary released on Friday. Overall, the changes in unemployment were minor in the United States. Nationwide... Read More