Bonds have had a dream run since bottoming late last year, particularly the longer end of the curve (I checked one popular longer-term US treasury ETF and it was up almost 30% off the low point!). Interestingly enough that followed a period of fairly miserable performance last year (mark to market returns were worse than -10% for the year at one point).  It’s often the case in markets that you see this taxonomy of price action.

That is, miserable performance is often followed by fantastic performance, and when it runs “too far too fast” the opposite plays out. This tends to be especially the case when the misery/euphoria is particularly accentuated in terms of speed/magnitude.

And so, with bonds having a particularly accentuated euphoric run (fair to say both in terms of speed + magnitude), I think it’s definitely worth asking if bond yields are too low.

I have a few charts I wanted to share with you on this topic, and the first one is perhaps a little bit controversial – but bear with me.  It shows the 10-year treasury yield against the 10-year growth rate in US nominal GDP (with IMF forecasts shown for the projection period). And it’s fair to say that something seems a little off here… 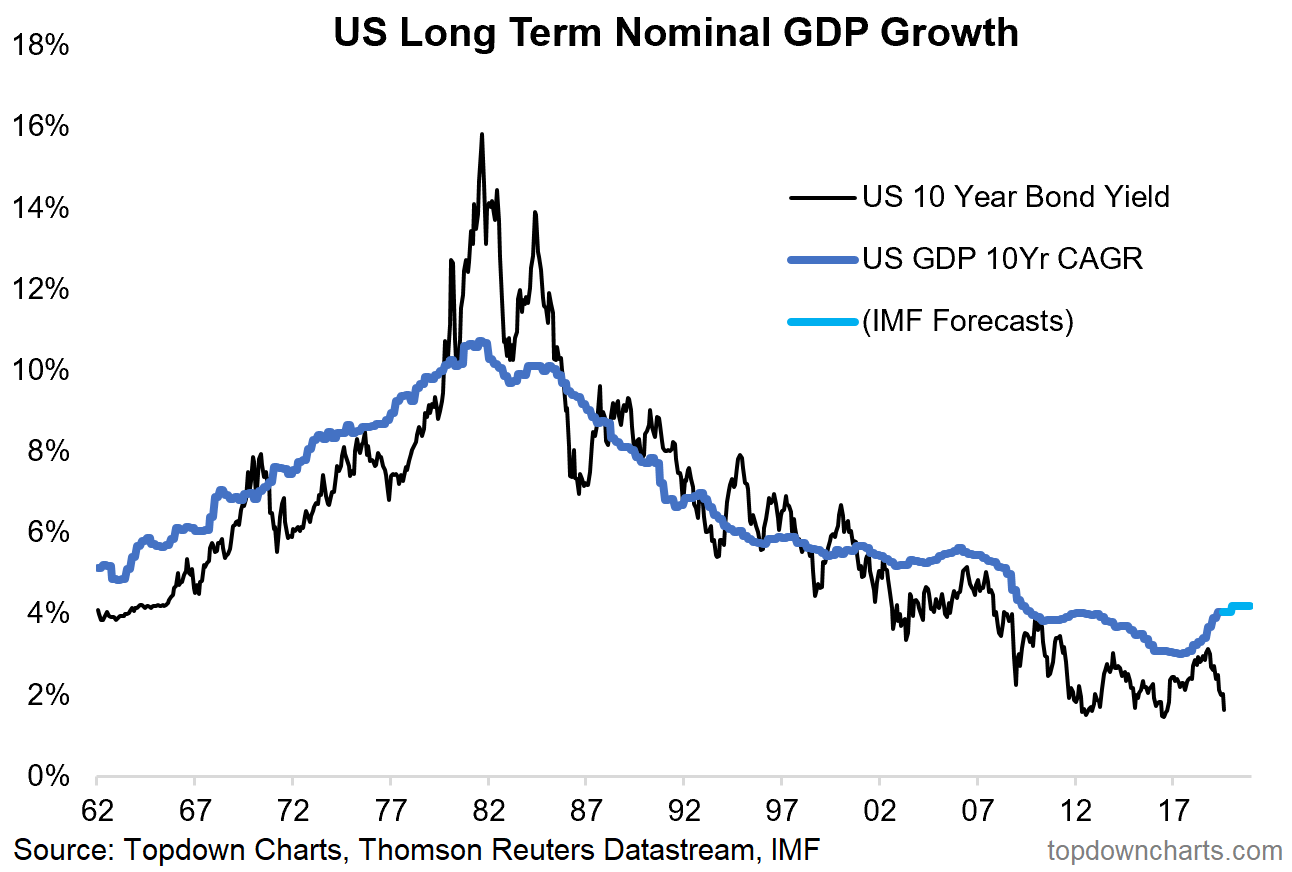 Indeed, a couple of things should be standing out at this point.  First: bond yields over the long run tend to roughly follow the path of longer term nominal growth.  Second: bond yields have significantly diverged from the same recently.  Third: the degree of divergence is similar to when we saw previous major cyclical/short-term bottoms in yields.

Basically it’s another way of saying that bonds are overvalued.

And on my metrics, they look extremely overvalued, in fact my composite valuation model shows US 10-year treasuries as the most expensive on record… or said differently, on this model, bond yields are certainly in the “too low” space. 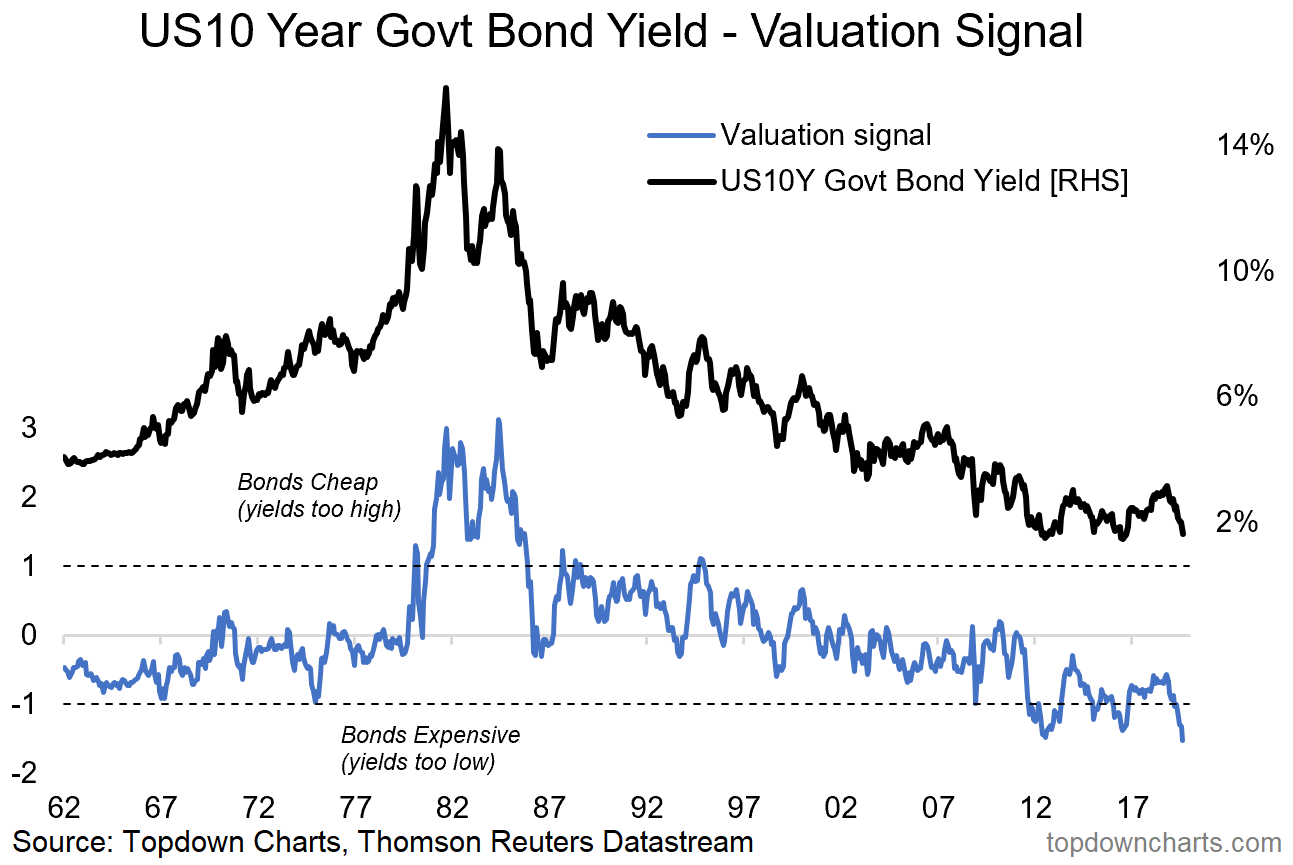 The chart above shows the composite valuation signal for treasuries over the long term. The model combines the signal from bond yields vs GDP (the previous chart), the term premium, real yields, and mean/trend reversion.

Over the medium-longer term we find that valuations have a habit of speaking for themselves, so when a valuation chart is saying that an asset is extremely expensive, it’s worth paying at least some attention to.

But the other thing we see over and over again is that markets don’t tend to get overvalued without a reason.  All good bubbles and excesses are more often than not born in sound initial logic.

We find this logic in the economic data pulse, and in some ways the chart below answers the question “why are yields so low?”  There has been a collapse in economic confidence, and this at least in part reflects a genuine slowdown (thanks in large part to global policy tightening). 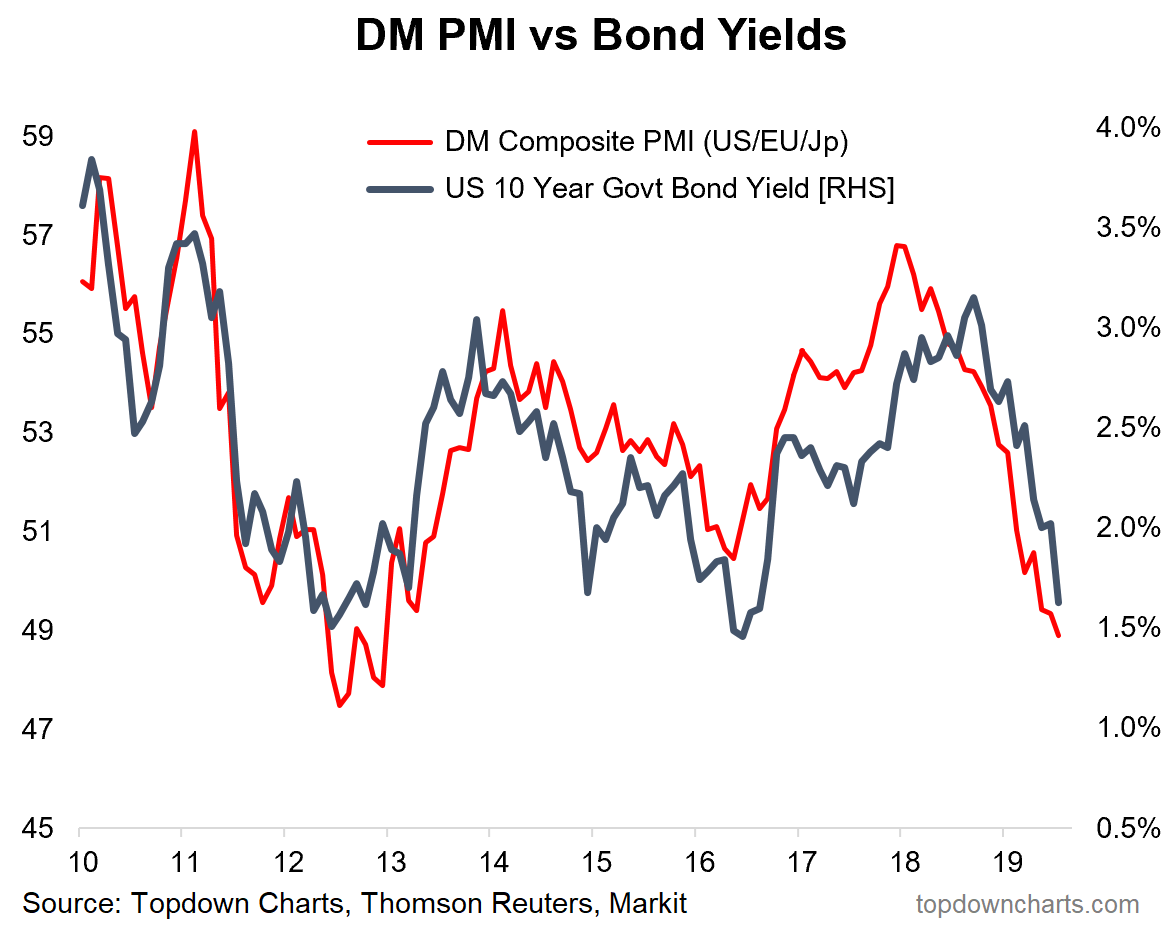 Basically yields have caught down to the slumping manufacturing PMIs.

The thing is though, the PMIs are about as bad as it gets already.  If you assume the relationship in that chart continues to hold, we would need to see a continued deterioration in the PMIs for bond yields to push even lower.

Yet as willing as I am to say that bonds are overvalued, I’m equally comfortable in acknowledging that the PMIs probably do need to at least stabilize if not turn up for a more lasting bottom in yields.  For that to happen, a few things need to go right… (e.g. with policy and (geo)politics).

But one thing I’ve noticed with the OECD leading indicators is that there are nascent signs the worst of the slowdown may be past us already.  This is another chart that might lose some people, because the news flow and market volatility probably makes the claim seem absurd. 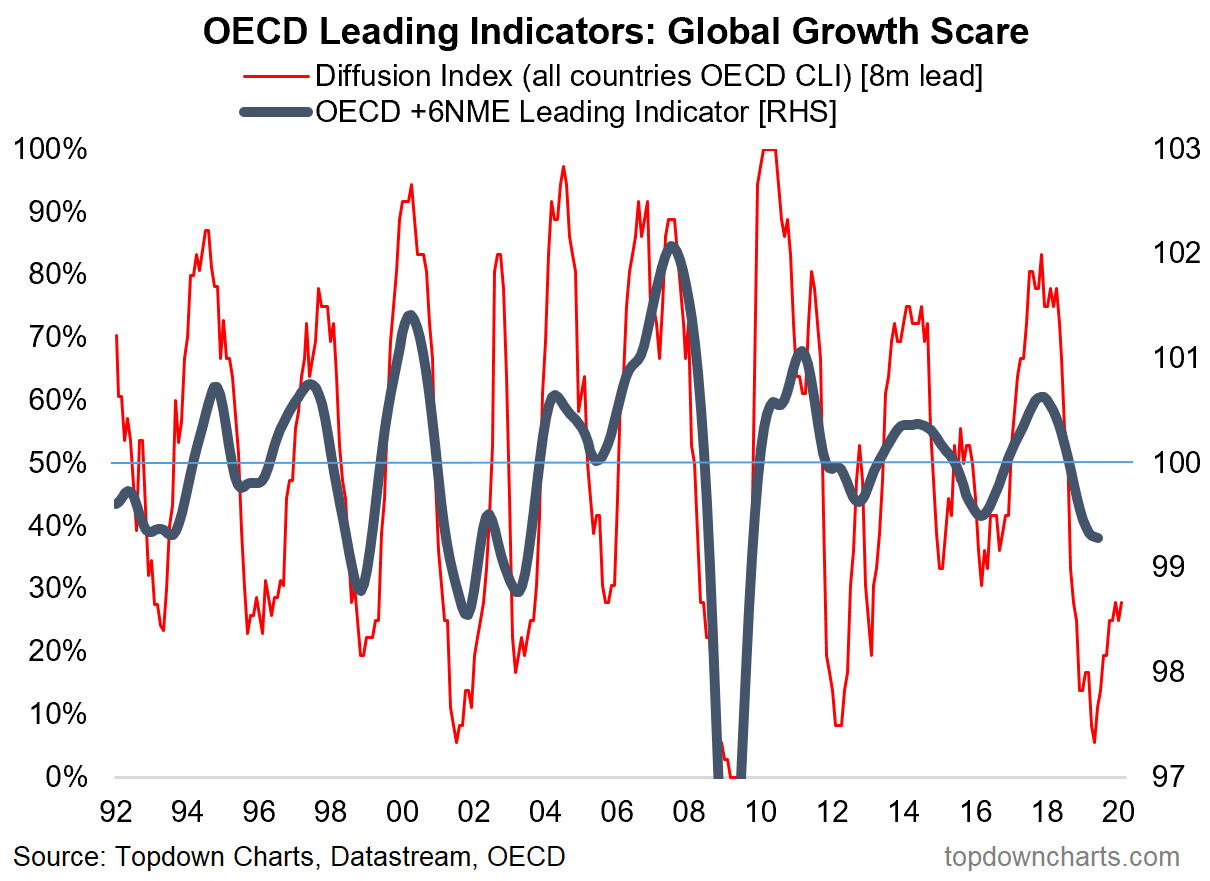 To be fair, you probably do want to see a bit more follow-through in the diffusion index, but the basic premise of this chart is the pace of deterioration has eased (I guess another way you could explain it is that things are getting worse more slowly).

And that’s often the first step on the road to recovery/re-acceleration.

But before I close off, I wanted to highlight one last chart.

But one thing in particular stands out to me. 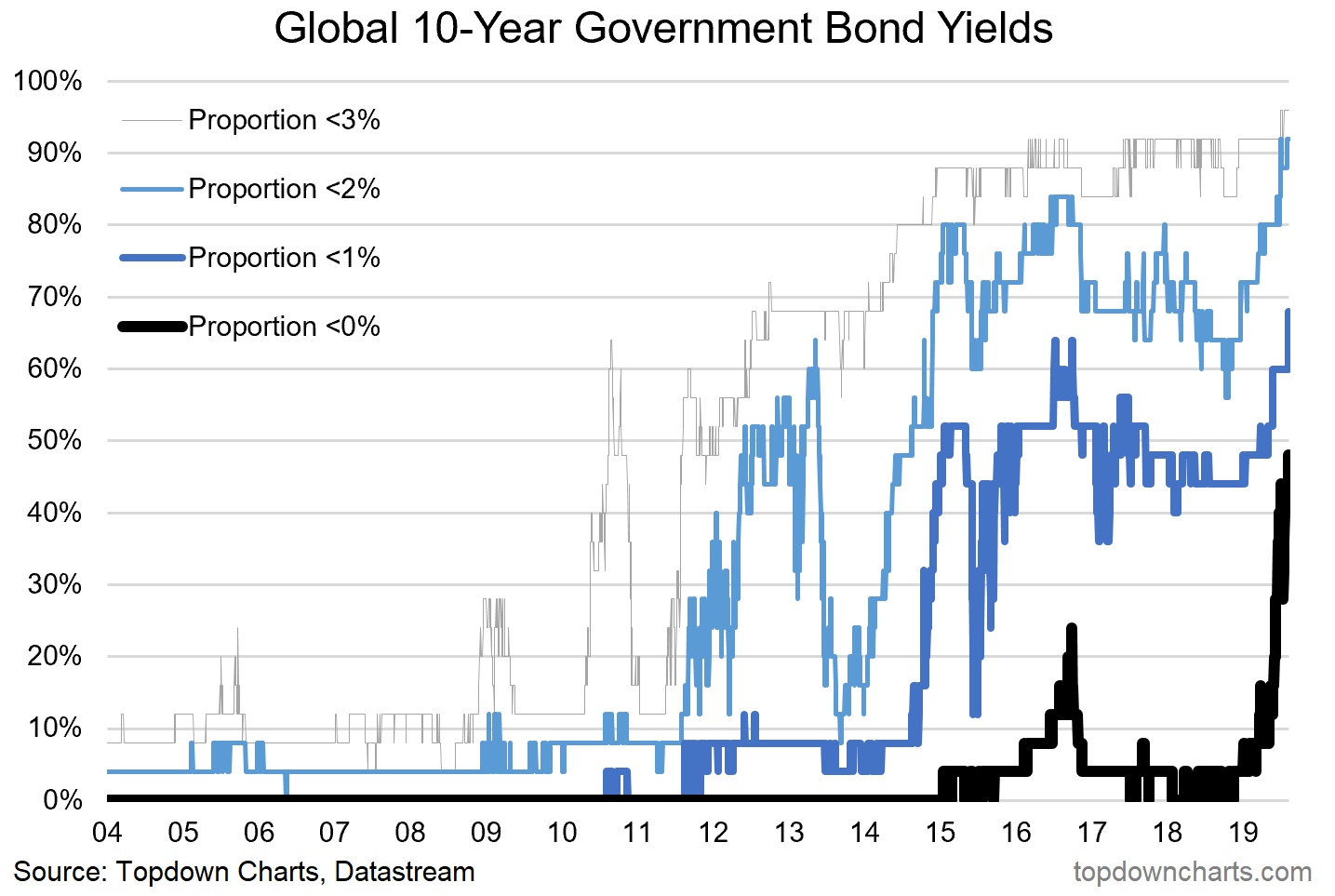 Just about every time there was a surge in new members of the successive lower yield cohorts it more or less coincided with a major short-term/cyclical low in yields.

Another way to say it (and I have a few other charts/indicators which confirm this assertion) is that bonds are significantly overbought.

Not only are bonds overbought (and overvalued as I noted above), sentiment is increasingly crowded to the bullish side (as I showed in chart on Twitter).  The only element left to fall into place is a stabilization/improvement in the economic confidence/data pulse.

So with treasuries overvalued and overbought, are bond yields too low?

The answer from the charts shown above is basically both yes and no, but mostly yes.  In other words, for bonds to rally further from here you are going to need to see a major *further* deterioration in (geo)politics and/or a major global recession.  That’s not my base case.

In the end, as I noted at the start of this ranticle, periods of euphoria tend to be followed by periods of misery.  When an asset is overvalued and overbought, a return to misery is simply a matter of timing.

Any comments/questions on this just get in touch direct or by social media.

The main chart in this article came from the recently launched “Top 5 Charts Of The Week” report – which is our entry-level subscription service.  >> Subscribe now and you’ll get a 1-month free look at our core institutional service.

Fed political Calculations? Some deny entirely while other analysts say the rate hike could be determined by the presidential election - count Richard Koo in that category! The Fed... Read More

Ray Dalio's Bridgewater Associates filed 13f with SEC today. Here is a breakup of the major portfolio changes in the last quarter—note that the long equity portfolio made public... Read More