The aggregate performance of Barac Capital Management’s (“BCM”) separately-managed-accounts (“SMAs”)1 for the second quarter ending June 30, 2019 was 4.4% relative to a 3.8% return for BCM’s benchmark.

Individual account performance may vary, depending on timing factors, fee levels, and customized asset allocations. Please check your brokerage statements for the actual returns of your individual accounts. 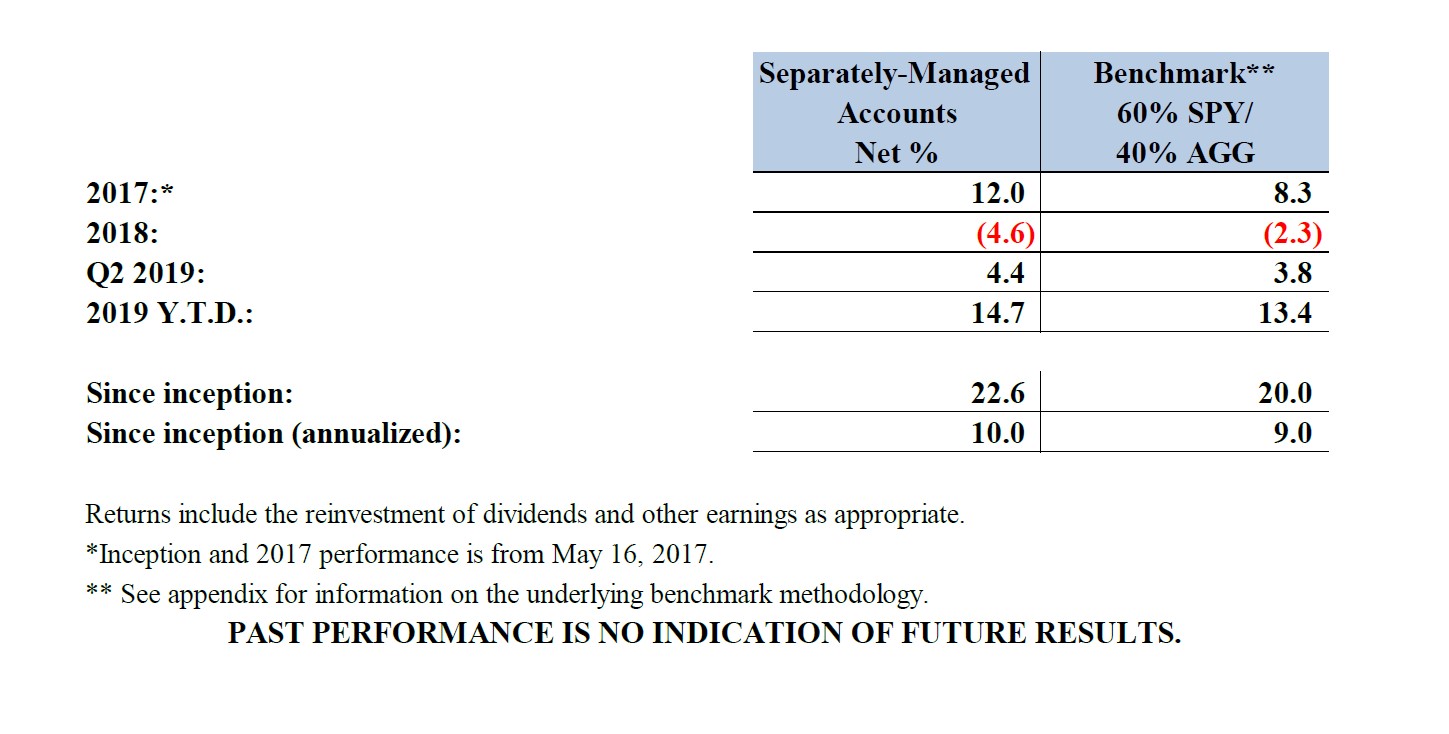 Top individual contributors for the quarter included Roku (+46% to position exit), Under Armour (+18%), and Target (+9%). The only two substantial detractors to performance were Walgreens Boots (-13%) and Federal Express (-9%).

As always, it is important to re-state that returns were generated without leverage (either direct or effective leverage, through options), without taking highly concentrated positions, and while conservatively holding substantial cash and/or Treasury bond positions.

Outperformance was driven by individual security selection and I’m happy to report that BCM’s 4.4% quarterly returns outperformed both the benchmark’s equity2 (up 4.2% quarter-to-date) and fixed-income3 (up 2.8%) subcomponents. I remain particularly pleased with year-to-date performance in light of BCM’s conservative asset class allocation (e.g. underweight stocks) during a very bullish period for the stock market.

While Roku was (again) the best performer, I fully exited the position during the quarter (selling the last shares at around $94/share). The reason for the exit was because of valuation concerns, as much more growth is now embedded in Roku’s valuation (currently valued at about 11x forward revenues4).

To be clear, I do believe that Roku’s strong market position and growth prospects deserve a high valuation multiple. Furthermore, I expect that the company could still exceed the market’s lofty expectations. That said, I also believe that “the bar” to meet expectations has now risen so substantially that there’s simply too much execution risk to warrant currently owning the shares.

The only two holdings that had a material negative impact on performance during the quarter were Walgreens (-13%) and Federal Express (-9%). While the full investment thesis for these companies is beyond the scope of this letter, I believe that the sell-off in both of these stocks has been overdone and these are currently two of my core positions.

As with Roku, the investment rationale for both Walgreens and Fedex has to do with market expectations (albeit, with the opposite dynamic). With both of these companies, I believe that the bar to meet long-term expectations is now simply too low.

Walgreens and Fedex trade at a forward earnings’ multiple5 of about 9x and 10x, respectively (relative to over 17x for the S&P 500 index as a whole). I believe this is too low, when considering the strong competitive positions and earning’s potential of both of these companies. While there are heightened industry risks and reasons for caution (within both the retail pharmacy and the transport/shipping industries), I believe that these risks are now more than reflected in their current share prices.

As I recently explained to some clients, I know that it might seem strange that I have invested in some low-growth companies facing considerable industry challenges and risks (e.g. Fedex and Walgreens), while I am currently avoiding some very high-growth companies (e.g. Uber, Beyond Meat, and Roku) with incredible forward prospects and industry tailwinds. The fundamental reasons behind these investments (and those omissions) comes down to some basic investing principles.

I believe that investing is not only about finding successful companies, but also about finding opportunities where the market has under-estimated a company's future earning's potential. In that regard, a great company doesn't necessarily mean a great investment. A high-growth company can be a bad investment if their high-growth doesn't quite meet the market's even higher expectations.

Similarly, a low growth company can be a great investment if that low growth isn't quite as bad as the market's more pessimistic expectations. Often, these opportunities are in out-of-favor industries and are contrarian to general market consensus. While a great deal of the time these situations are “value traps” — where the “cheap” become cheaper — great bargains can also be found.
For example, Under Amour’s shares have returned 74% from their 2017 lows (even after their recent Q2 earnings’ sell-off) and Target's shares have returned 58% from their 2017 lows. In neither case was this because of delivering massive growth. Rather, the pessimism surrounding those companies' growth prospects simply proved to be overdone.

After today’s market plunge6, the S&P 500 is off about 6.0% from its 52-week highs (but still up over 21% from the December 2018 lows). While this recent sell-off has increased the relative attractiveness of a number of stocks, not much has changed with regard to my overall conservative outlook and positioning. As I have said before and will repeat again, what continues to concern me is the earnings part of the price/earnings equation and the increasing risk that some of the contributors to current (high) profit margins could come under pressure.

Earnings’ levels continue to reflect low interest rates (and low credit spreads), the positive wealth effect of 10 years of rising stock prices and home values, high levels of deficit spending, and record low unemployment levels. Furthermore, current valuations still appear to incorporate too little with respect to geo-political risks at a time when there is much political change and uncertainty. It also warrants keeping in mind that if/when the business cycle does turn (and assets prices fall), a resulting “reverse wealth effect” could exacerbate the impact of a cyclical downturn.

For all of these reasons, SMA accounts remain more defensively positioned than the benchmark (which, itself, reflects a conservative asset allocation). This is reflected in the fact that 48% of the SMA assets are currently either in cash or U.S. Treasuries with maturities less than 5 years. Accounts also remain well diversified, with no single-stock position accounting for more than 6.0% of BCM’s assets-under-management. As always, risk management and capital preservation remain paramount to the investment strategy.

While there’s no doubt that a conservative positioning has limited the magnitude of positive returns this year, I still believe that sitting on the sideline with a reduced equity position (during periods of heightened uncertainty) is prudent from a capital preservation perspective. However, as with any insurance policy that doesn’t get utilized, there was no quantifiable benefit from employing these risk reduction measures and the relative impact on year-to-date performance was negative.

Thank you to everyone for your interest and support and please let me know if there are any questions you may have that I haven’t answered. 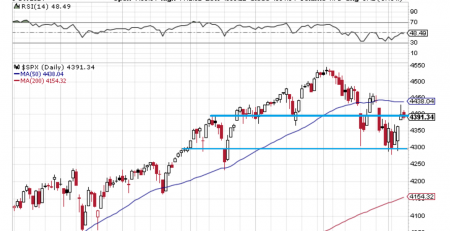 Welcome to the Weekly S&P500 #ChartStorm (by email!) Q3 2021 hedge fund letters, conferences and more The Chart Storm is a weekly selection of 10 charts which I hand pick from... Read More

Arnold Van Den Berg On Value In The Materials Sector