First, a disclaimer. We are not suddenly pro-market timing. We have always either advocated against it, or, at the most, argued for sinning a little (meaning don’t do much of it or only do it at true extremes – and even then don’t do that much of it!). Still, whether you’re going to do anything about it or not, 1  please just view this as a posting. When something as important as the U.S. bond yield hits historical extremes, it’s worth at least a discussion, though certainly not an automatic huge short. There are also some other interesting things to examine along the way about the long-term relationships between real bond yields, real T-bill yields, the slope of the yield curve, and economic conditions.

I’m going to look at two measures commonly used to evaluate the attractiveness of the U.S. 10-year bond, measured fairly simply (in real life models we can get a little crazier, hopefully in a good way):

I think of 1) as a “value” measure for bonds and 2) as a “carry” measure. 2  Broadly speaking we think a bond investor generally would like more of both (all else equal). Here’s a graph of this version of real bond yield since 1955: 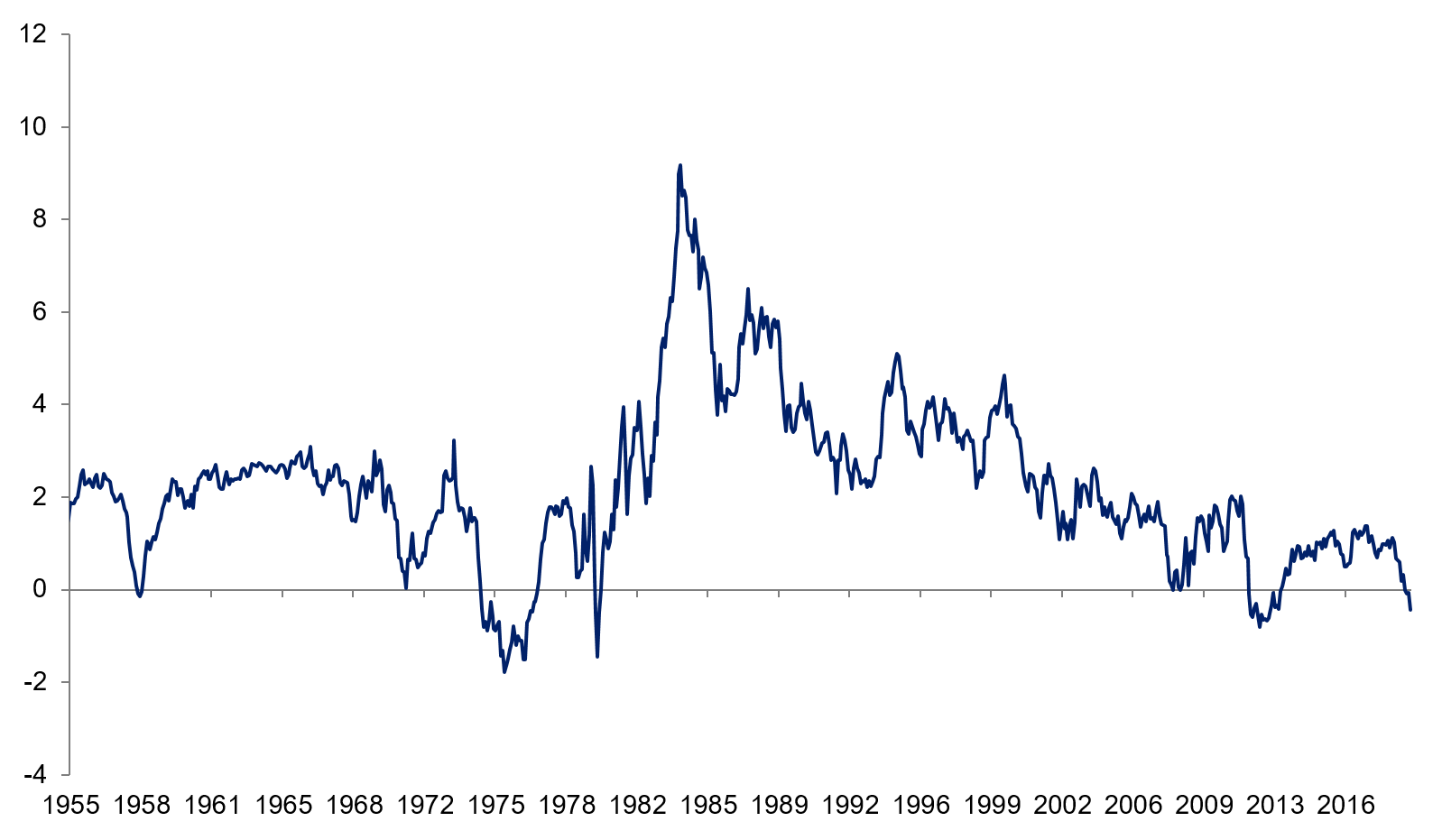 Source: AQR, Reuters. Inflation is defined as the average 3-year inflation rate annualized. For illustrative purposes only and not representative of any portfolio that AQR currently manages.

Today’s value is pretty darn low. Not quite as low as a few years ago, but 5th percentile low over more than 60 years.

Next we graph the slope of the yield curve:

Slope of the Yield Curve 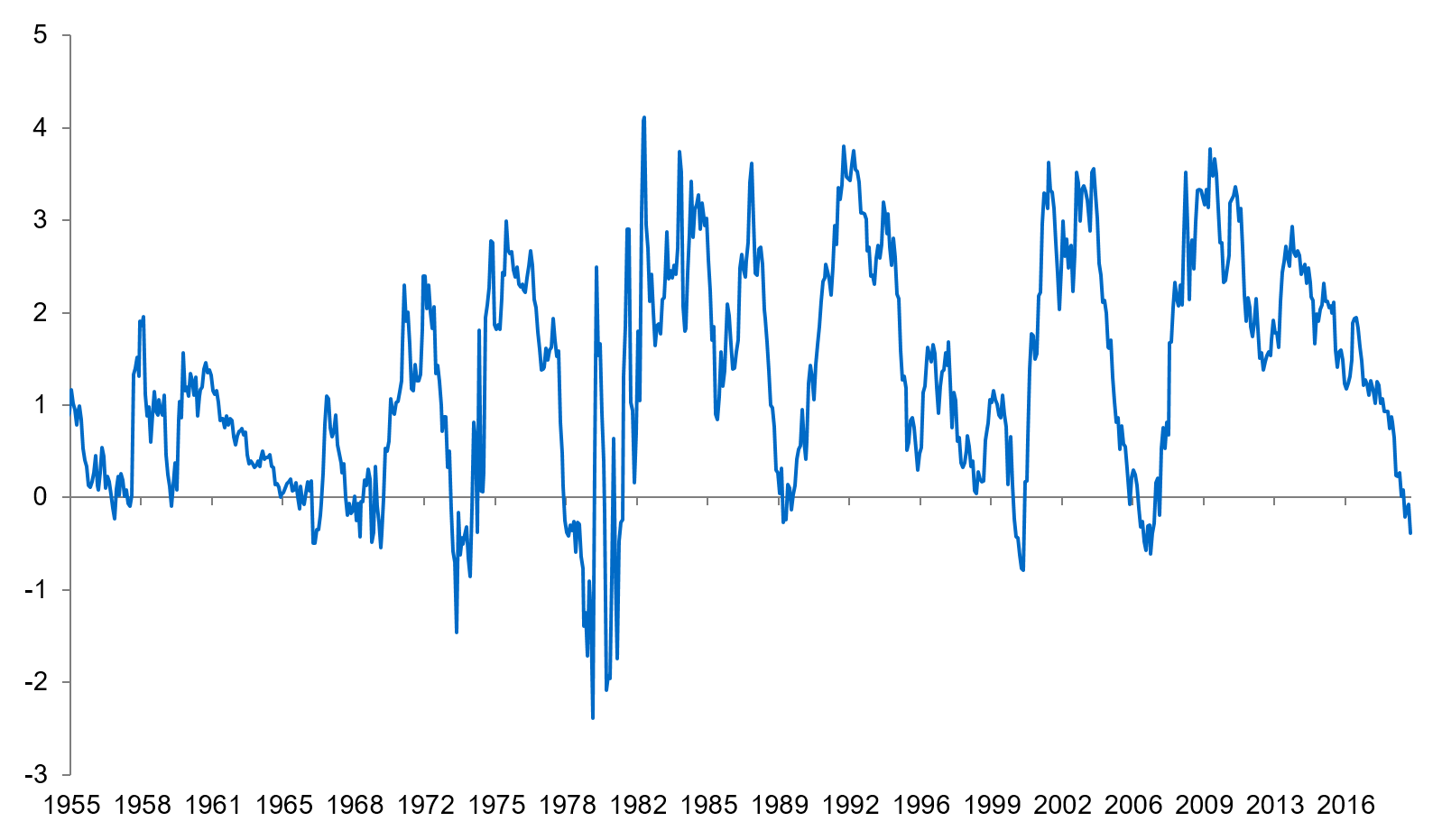 Source: AQR, Reuters. The slope of the yield curve is defined as the 10-year yield minus the 3-month T-bill rate. For illustrative purposes only and not representative of any portfolio that AQR currently manages. 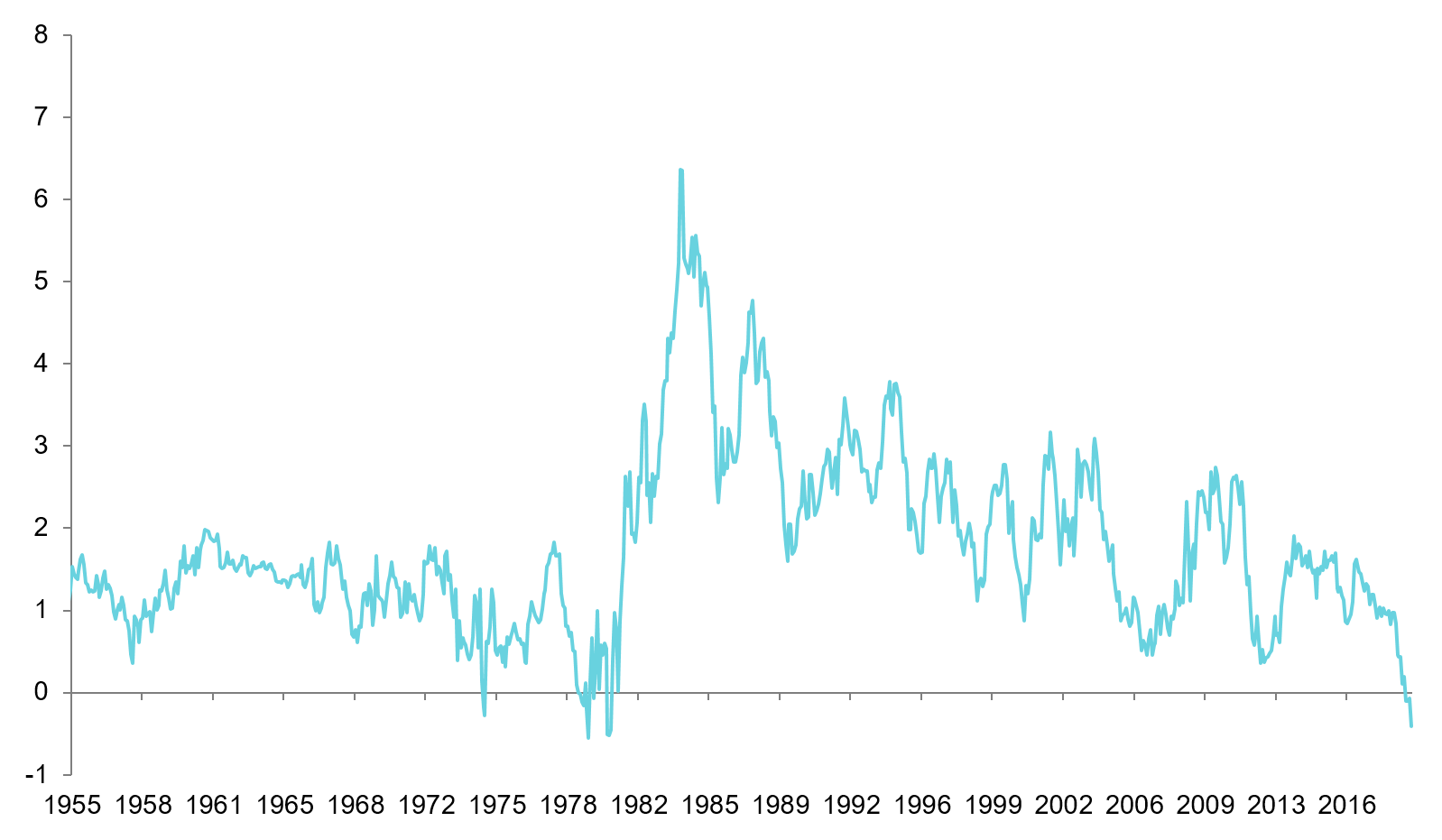 Source: AQR, Reuters. Based on the real bond yield and yield curve slope as shown in the prior charts. For illustrative purposes only and not representative of any portfolio that AQR currently manages.

This measure is essentially at a 64-year low (less than the 1st percentile), with a value not seen save for a pair of months in the late 1970s. Pretty wild considering some of the times we’ve lived through (including the post 2008 period of “financial repression” when real bond yields got a bit lower than today but the curve was generally upward sloping, making the average of the two measures not nearly as low as today).

You might be surprised the combo is much worse than the two individual signals. You expect this when combining uncorrelated signals that are both at big negatives, as it’s much more statistically shocking to see both so low at the same time. But you don’t expect it for very correlated signals. And surely, real bond yield and the slope of the yield curve are highly positively correlated, right? I mean they both start with the same 10-year Treasury yield and both subtract related measures that each average less than the 10-year. One just subtracts inflation and the other short rates. They must be at least fairly similar, no?

Well, you might have noticed this from the charts above (those who can do correlations in their head!) that they are not very correlated at all. Over this period these two seemingly quite similar series are only 0.07 correlated. When two measures, 0.07 correlated, are both near historic lows, the average of them indeed tends to be a whopper (as it is). 4

While not the central point here, it might be interesting to explore why this correlation is so low (and so much less than what I think our collective intuition might’ve guessed). As always I remind readers that this is a blog and not a research paper. I have chosen one measure of economic activity (trailing 3-year growth in industrial production) and below I use it to see if we can shed some light on this puzzle. I think the forthcoming results are interesting, but this would have to be subject to a ton more testing (robustness to other reasonable measures, look-back periods, etc.) before you’d want to feel any certainty about it.

Let’s break up the real bond yield into two parts:

These two are -0.53 correlated over this 1955-present period. I think this is pretty intuitive. If you imagine a string starting at the inflation estimate, going to the T-bill yield, and then on to the bond yield, if you pulled up on that string at the T-bill rate, you’d raise the real T-bill yield and lower the slope mechanically. But let’s try to get a bit more economics involved.

The correlation (1955-present time series correlation) of the slope of the yield curve with trailing industrial production is a quite negative -0.58. This makes sense. Near the peak of a business cycle, when trailing industrial production is likely the strongest, you often see a flat or even inverted curve as central banks attempt to take away the punch bowl.

Next, the correlation of real T-bill yields with the same trailing industrial production goes strongly the other way (coming in at +0.57). Again, this makes sense. A strong economy is associated with higher real interest rates, and perhaps a Fed trying to slow things down by raising short rates above inflation (I won’t get into disentangling that one). 5

Now, since the real bond yield is the sum of these two (slope and real T-bill yield) it’s not surprising its correlation with industrial production is in the mushy middle (0.27 over our 1955-present sample). So the real bond yield is 0.27 correlated with our industrial production measure and the slope is -0.58. Now it’s suddenly less shocking the two aren’t correlated with each other.

Here’s another way to look at it. The following is the full period monthly regression of the yield curve slope on the real bond yield: 6

Nothing surprising, of course, after knowing the correlation is very low: an economically and statistically very small positive relationship. Now let’s add trailing industrial production to the regression:

Nothing earth shaking here, but pretty intuitive. We knew above the slope was strongly negatively related to recent growth in industrial production. But, by accounting for this relationship, we more than triple the economic relationship of slope with real bond yield (i.e., the coefficient goes from 0.05 to 0.17) and the coefficient on real bond yield goes from statistically insignificant to statistically significant (if certainly not earth-shattering). Clearly there is more going on than can be accounted for by just this one arbitrarily picked measure of economic strength – but it does aid our understanding. Part (maybe more if better measures are found) of the weak negative correlation of slope and real bond yield comes from their very different, and confounding, relationship with the state of economic growth.

But, yet again, we caution against market timing based on just valuation. For instance, Japanese bonds have, on various metrics, been incredibly expensive since many of today’s traders were in short pants. 7 Furthermore, the U.S. bond yield might be record low on our combo value/carry metric, but it’s still high versus some major parts of the world attempting to discover how negative a government guaranteed bond can yield before savers build private fortresses to store cash.

Still, we thought that one of the (if not “the”) premium benchmarks in the world hitting near 60+ year lows (including versus the post-GFC “repression” period) on a combination of very basic measures of bond attractiveness, and amidst a still reasonably strong U.S. (if not global) economy was worth a mention (and some reasonably cool analysis of how different parts of the curve and different metrics respond to economic conditions).

How much, if at all, you choose to sin or not sin because of super-low U.S. yields, is, of course, up to you.  Our recommendation is, again, you probably should do less than you first think.

Finally, in the interest of full disclosure, it’s worth noting that we do have at least somewhat of a horse in this race. In an ongoing quite tough time for many liquid alts, and an ongoing long- and short-term bull market in bonds, many seem to be asking, “hey, maybe bonds are a better diversifying asset than alts?” While we are clearly circumspect about betting a lot on contrarian market timing, we are certainly way more than circumspect, downright suspect, of this kind of anti-contrarian market timing!

In their latest Perspectives, Bridgeway Capital say, “after the tremendous run of large and growth stocks over the last decade, we believe small-value stocks still have room to run.”... Read More