Dark Days Are Closing In On Apple? – ValueWalk Premium 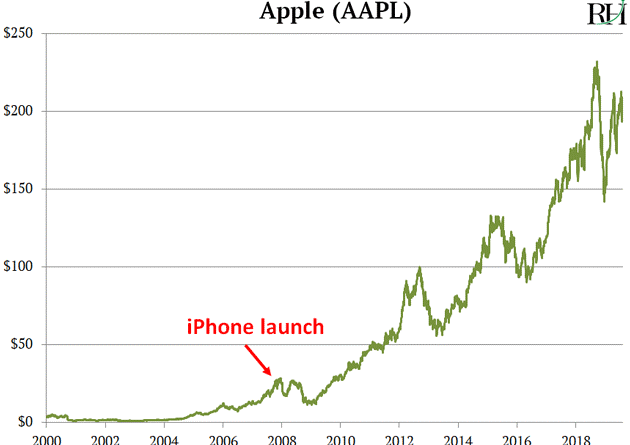 What’s the most successful product in history?

Apple (AAPL) has sold roughly a TRILLION dollars’ worth of iPhones since 2007.

If the iPhone were a company, it would rank #30 on the Fortune 500 list of the world’s biggest businesses.

Since the iPhone debuted in 2007, Apple’s sales have jumped 10X. It became the first public company to ever achieve a trillion-dollar valuation. 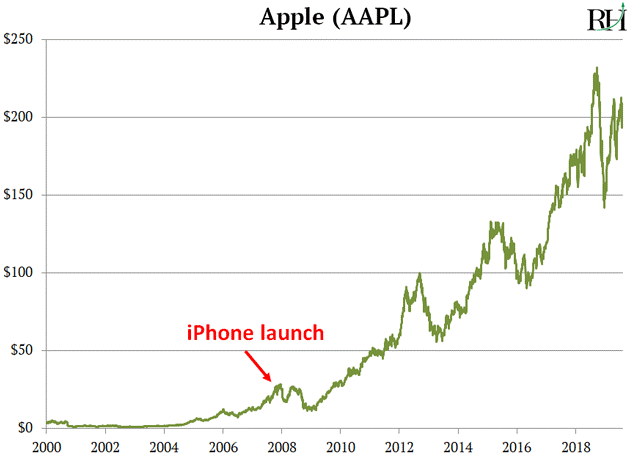 Did You Know That Apple Once Almost Went Bankrupt?

The mid-90s were a boom time for many tech stocks. Not Apple.

Back then, it mostly sold computers, and its “Mac” brand made up less than 5% of the market. In fact, competitors like Dell were outselling it 10-to-1.

Apple was in serious trouble. It had laid off a third of its employees and was about 90 days from going broke. Its market valuation shrunk to just $2 billion—about 1/500th of what it’s worth today.

Then came the iPod.

As you surely remember, the iPod was a small, sleek music player that held tens of thousands of songs. In the early 2000s, this seemed like magic.

Folks bought iPods by the truckload. You couldn’t enter a gym or walk a city street without seeing one attached to every other person’s hip.

Apple went on to sell over 400 million iPods. It transformed the company from a struggling computer maker into a $100 billion powerhouse.

Apple Is What I Call a “BIG IDEA” Disruptor

The iPod and the iPhone were big ideas that changed the world. They weren’t just new products. They were whole new categories of products.

Apple is different from many other disruptors I follow.

Take Amazon (AMZN) for example. It operates dozens of businesses.

We all know about Amazon’s online store, but it also has a booming “cloud” business, owns Whole Foods grocery chain, and even runs an advertising business.

Apple, on the other hand, has made its fortunes through hitting grand slams on a couple of big ideas. For the last twelve years, most of Apple’s growth has come from its last big idea: the iPhone.

For much of that time, the iPhone has made up roughly two-thirds of Apple’s sales.

Problem is, the iPhone trend is out of gas. As I explained recently, iPhone sales have been shrinking since 2015. Last year, Apple sold 14 million fewer phones than it did three years ago.

For years, Apple masked this troubling decline by hiking iPhone prices. For years, it worked. Even though iPhone unit sales were falling, iPhone revenue kept growing.

It’s Important to Understand This Isn’t a Blip

When Apple launched the first iPhone, only 120 million people even owned a cell phone. Today, over 5 billion people own a smartphone, according to research firm IDC. Keep in mind, there are only 7.7 billion people on earth.

Apple investors should be asking: “Now what?”

Apple Is the World’s #1 Seller of Watches

With its “Apple Watch,” Apple now sells more watches than any other watchmaker on earth. More than Timex… more than Rolex… more than all the Swiss watchmakers combined.

Problem is, wearables make up less than 10% of Apple’s revenue. The Apple Watch isn’t a big enough idea to move the needle.

Apple is a “big idea” business that hasn’t come up with a new big idea for a decade. Its last hit was the iPad, which it launched in 2010. Today the iPad makes up less than 9% of Apple’s sales.

Apple Reminds Me of Sony (SNE)

Who didn’t have a Sony Walkman?

And millions of 90s kids begged Santa for a PlayStation video game console. Time Magazine ranks the original PlayStation as the #1 bestselling product of all-time.

Sony was the Apple of its time… a vaunted inventor of megahit products. Its stock soared 500% in the 90s as it dominated TVs, video games, and portable music players.

But then Sony ran out of big new ideas. Meanwhile its Walkman was disrupted by Apple’s iPod. And the PlayStation lost much of the video game market to Microsoft’s Xbox and others.

Remind you of anything?

Apple is on its 10th version of the iPhone.

Sony faded and its stock has gone nowhere for two decades, as you can see here: 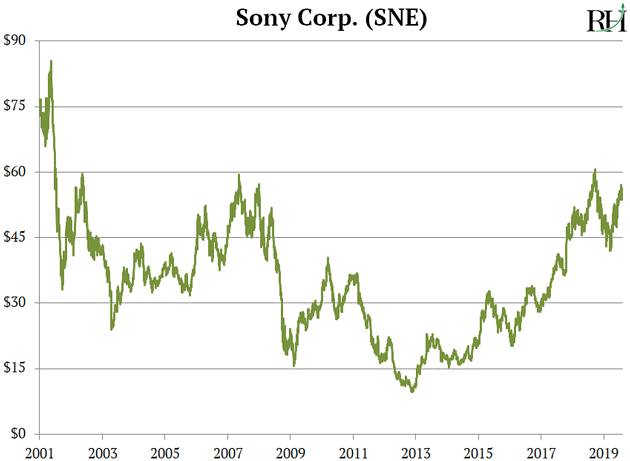 To be clear, I’m not predicting Apple will go bust. It has $180 billion cash in the bank and is on track to earn $56 billion in profits this year. It can continue coasting on its past innovations for years.

But you must understand that Apple was the world’s largest and most successful company of the past decade. It is still the second biggest public company today. When the bar is sky high, and you’re competing with big-leaguers like Amazon and Google and Samsung, coasting isn’t good enough.

If iPhone revenue keeps dropping by roughly 10%/year, my calculations show its other businesses will have to grow by at least 15% just to keep profits stable.

Unless Apple can pull off another iPod/iPhone/iPad megahit, its best days are gone.

This looks like a new whitepaper and video from Bridgewater Associates on how the economic machine works. The economy works like a simple machine. But many people don't understand it— or they... Read More

[Archives] Do Investors See Through Mistakes In Reported Earnings?