Total private and public debts in the U.S. have hit an all-time high $70 trillion. One contributor, fueled by high interest rates and expanding services, is credit card debt. Per capita credit card balances top $3,000 in the U.S., with the most expensive states to live in impacted the most. 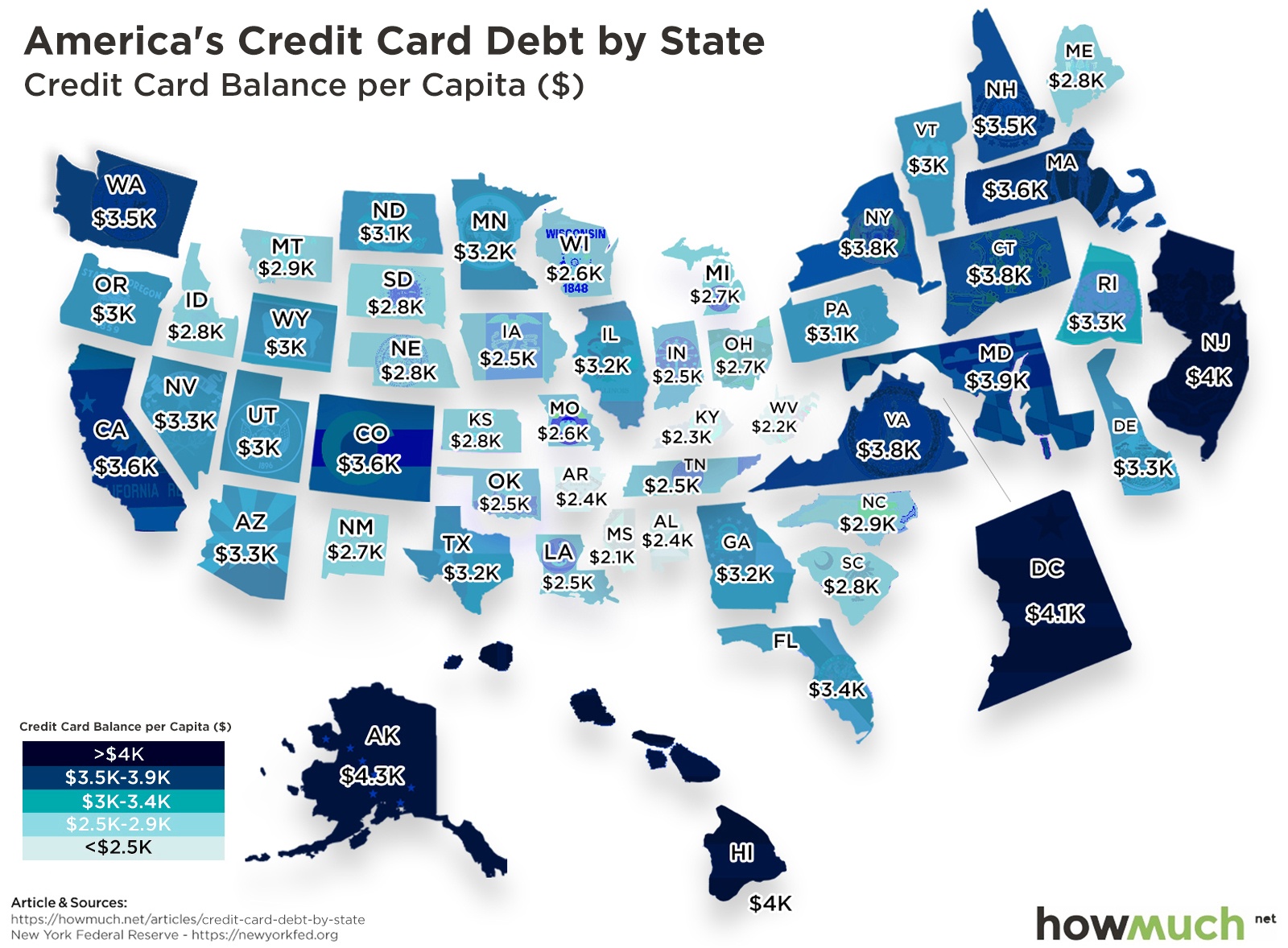 The data comes from the Federal Reserve’s New York branch, which puts out quarterly reports on household debt and credit for all 50 states. Our viz shows credit card debt balance per capita by state as of Q4 2018. A darker shade of blue indicates a higher debt load.

Despite overall low interest rates, credit card rates have hit a 25-year high, with average interest rates at 17%. At the same time, total consumer debt in the exceeded $4 trillion for the first time, a figure which includes credit card debt.

Key players in the credit card industry have seen impressive gains with the rise in credit card debt. Card spending at JPMorgan rose 11% in the last quarter. Shares of Mastercard and Visa, the largest card processors, have risen 47% and 37%, respectively, in 2019, compared with an increase of about 20% for the S&P 500.

Credit card spending continues to rise with the ever-growing presence of online commerce, which increased by 15% in 2018 alone. Purchasing from anywhere on earth has never been easier, but paying for it is another story – 70% of U.S. consumers admit they wouldn’t be able to pay their credit card debt off in a year.

How has credit debt affected people in your state? Are higher credit card rates leading you to use debit instead? Are you interested in the Apple Card? Let us know in the comments.

The hunt to punish the man that dared defy the German banking establishment, former Greek Finance Minister Yanis Varoufakis, just got hotter. And this time, they may have some... Read More

Active Share is a popular metric that purports to measure portfolio activity. Though Active Share’s fragility and ease of manipulation are increasingly well-understood, there has been no research on... Read More

Bill Ackman renewed his short attack on Herbalife Ltd. (NYSE:HLF) today at the Robin Hood Investors Conference. While his presentation was closed to media, he later discussed it on... Read More

It's Not Just The Fed Interested In Purchasing US Treasuries

Who has been the most significant buyer of US Treasuries since the 2008 global financial crisis? The US Federal Reserve? While US central bank demand forces have been meaningful,... Read More

Wally Weitz: Finding Value in Growth Stocks H/T Dataraom Longtime value manager Wally Weitz has unperformed many of his peers in recent years, in part because he has been keeping a... Read More