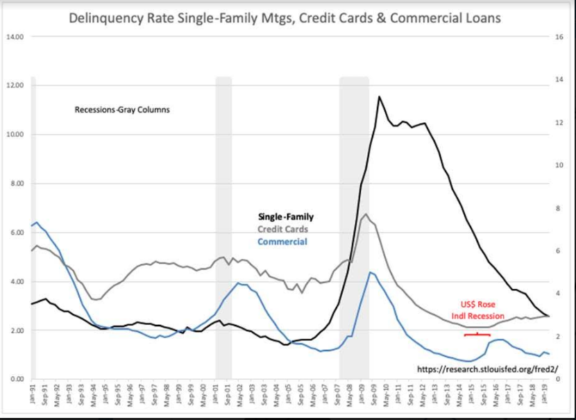 You may have noticed that it seems that every pundit is forecasting recession claiming to see all the signs of economic weakness. It seems they have ignored record employment, record retail sales and record personal income with no changes in trends from 2009. Financial health seems present everywhere one looks. Yet, the same pundits point to record consumer debt levels and claim conditions are the same as just prior to the Great Recession of 2008.

The problem with the current pessimism is that the data does not support the thinking. Importantly, Delinquency Rate Single-Family Mtgs, Credit Cards & Commercial Loans are near the lowest levels recorded and mostly in decline. There was a period 2014-2016 during which delinquencies rose for Credit Card and Commercial Loans. This period of weakness was due to US$ strength and the plunge of oil prices (caused oil patch recession), but economic activity has since recovered even with the US$ remaining strong.

Recessions occur when consumers and businesses have difficulty repaying debt. Lenders suddenly reduce lending activity and the more risky loans go into delinquency having lost the flexibility to renew borrowing. It is a process which has a ~20mo lead-time. That delinquency rates are falling is a sign that we remain in a decent economic expansion with no headwinds at the moment.

The many forecasts for recession appear not only mistaken but tinged even with some degree of political bias. One can always accept misinterpretations of data, but when commentary clearly diverges from the most obvious data then it becomes clear that something else is occurring. Even with the current onslaught with some attempting to talk markets lower, markets do not control economic activity despite some believing so. While markets can be ‘talked down’ temporarily, economic activity cannot.