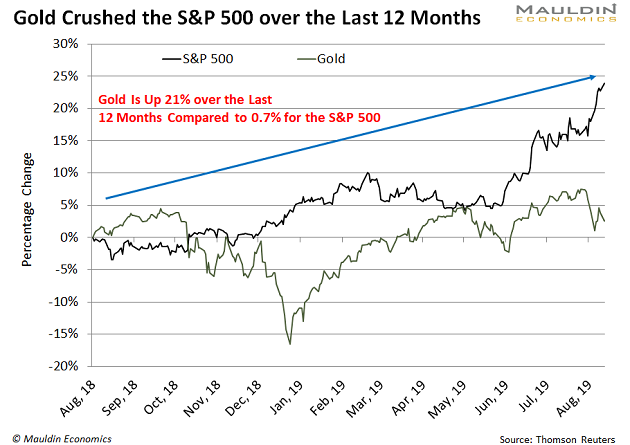 For your sake, I hope you already have some gold in your portfolio.

Gold is on an amazing run. It’s up over 21% since last August. 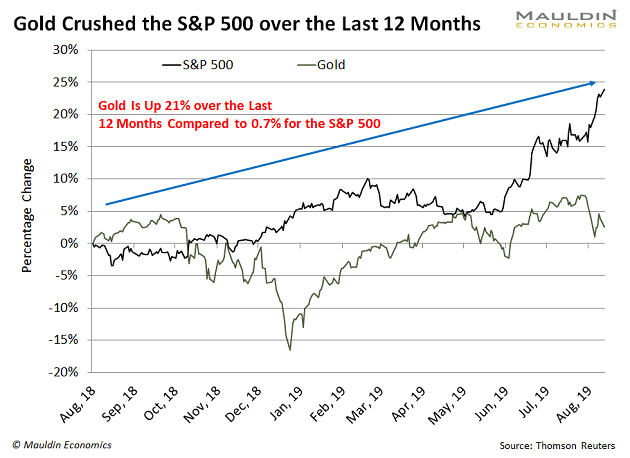 While gold has done very well in general, I’ve found one niche group of gold stocks that is hands down the winner in this run.

I’ll tell you about it in a moment. Before that, let’s look at why gold is performing so well.

When stock market risk goes up—like it has in the past 12 months—investors flock to safe investments like gold. That’s one of the reasons gold is doing so well.

The same thing happened shortly before the global financial crisis. Gold rose a whopping 83% between January 2005 and October 2007 when the stock market peaked. That’s more than triple the S&P 500’s 26% return during that period.

I’m sure you remember what happened next…

In fact, gold gained over 25% during the global financial crisis: 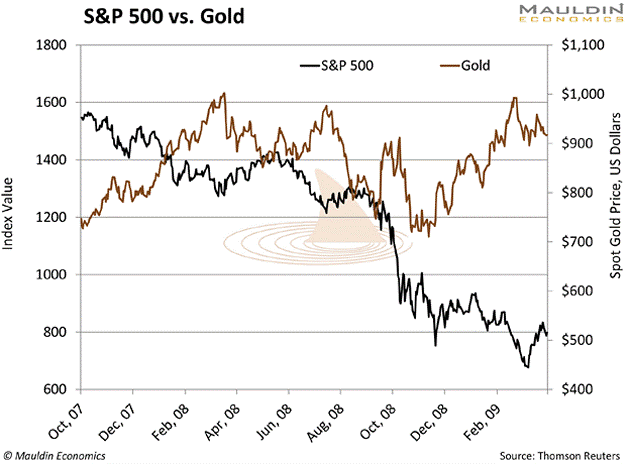 The same scenario played out when the dot-com bubble burst. The S&P 500 lost over 46% from August 2000 to May 2003 as investors fled the first generation of internet-based companies. Meanwhile, gold gained over 43% during that period.

Today, we’re on the cusp of a similar situation.

The S&P 500 has increased nearly 200% over the last 10 years. That makes this the longest bull market in US history.

Of course, nothing goes up forever. My research indicates that stocks will peak in mid-2020. But we don’t need to pinpoint the exact date here.

The important thing to know is that eventually, stocks will fall. And when that happens, gold will surge. So it’s good to own some gold right now.

Gold royalty companies are the best gold-related investment to own right now.

Building and operating a gold mine is very expensive. Sometimes a miner is sitting on a promising deposit but doesn’t have enough money to get the gold out of the ground. This is fairly common.

That’s where royalty companies come in.

A royalty company makes an up-front payment to a mining company. In return, it receives a fixed percentage of the mine’s production, typically for as long as the mine is active.

With the royalty model, the gold miner does all of the heavy lifting, like digging up and selling the gold. The royalty company doesn’t do any of that. It simply provides cash to miners to help them run their businesses.

Then, when the miner sells the gold it digs up, the royalty company receives a royalty payment.

Here’s the best part: When gold prices rise, the royalty payments rise as well. When that happens, the royalty company makes more money—and so do its shareholders.

Meanwhile, if the mine produces more gold, or the life of the mine is extended, the royalty company benefits, too. This is all without investing any additional money.

Even better, besides the unlimited upside, royalty companies also have very limited downside.

The royalty company isn’t on the hook for any of the variable risks and costs that come with running a mine.

Mining is full of challenges that miners can’t always predict or control. Things like environmental activism, political risks, union pushback, and new safety regulations. But royalty companies don’t cover any of the costs associated with that stuff.

In short, royalty companies get the best of both worlds. They make a lot of money when a miner does well. But there’s a cap on how much they can lose when a miner runs into roadblocks.

Royalty Companies Are Having a Fantastic Year

You already know that gold is having a great year.

You can see this in the chart below. 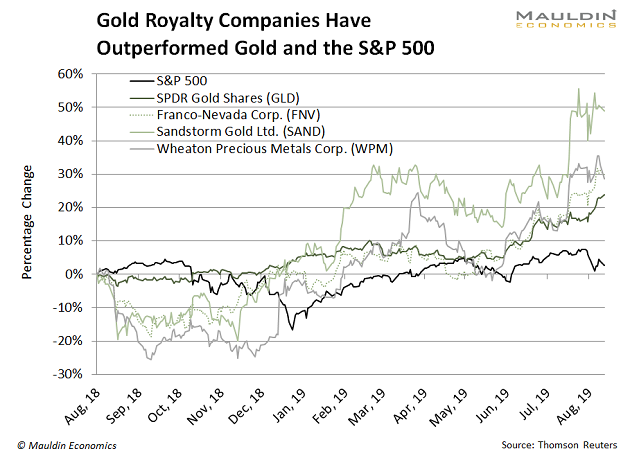 These three companies also have an average dividend of 1.3%—modest, but still safe and reliable income.

The Top Gold Royalty Stocks to Own Now

I’m looking for the safest and most reliable dividend-paying stocks. And right now, my top gold royalty companies I just mentioned are still offering compelling value.

Let me give you a quick rundown on each…

Sandstorm Gold is another Canadian royalty company. Its huge portfolio includes 185 royalties. This protects the company from any negative fallout if anything goes wrong with one of its miners.

But the best of the bunch is Wheaton Precious Metals Corp. (WPM).

Wheaton is unique. It has a large portfolio of both gold and silver royalties. This gives investors more exposure to the broader precious metals market. 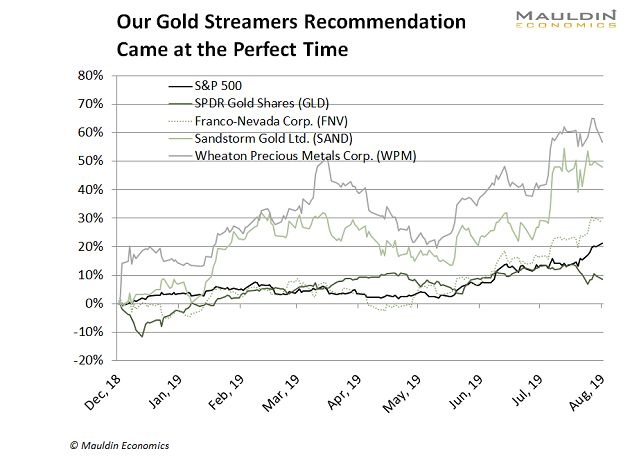 With trade wars brewing, the global economy slowing, and the stock market near all-time highs, it’s time to add gold and gold stocks to your portfolio.

Gold royalty companies should be at the top of that list.

After last week's round of bad news for the company, there may now be one bright spot for Hewlett-Packard Company (NYSE:HPQ). By splitting up the company, it could bring... Read More