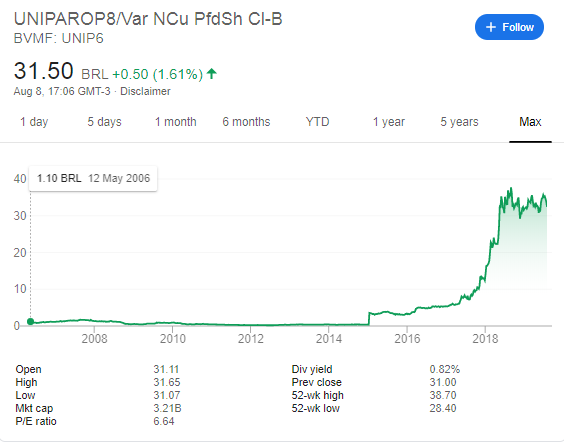 In today’s article, I would like to talk about a Brazilian company called Unipar Carbocloro, which I had the chance to visit its factory in Brazil. The company produces chlorine, caustic soda and derivatives for industrial use. In 2016, the company bought a competitor called Solvay Indupa, therefore also creating PVC (polyvinyl chloride). While caustic soda and chlorine are entirely different and used in distinct markets, they are mutually generated at the same time in one source and produced in a process called electrolysis (decomposition by continuous electric current), at a ratio of 1 ton of chlorine to 1 . . .

This is part three of a ten-part series on some of the most important and educational literature for investors with a focus on value. Across this ten-part series, I’m... read more

Benjamin Graham — Part One: An Introduction To The Godfather Of Activism

This is part one of a ten-part series on the life and career of Benjamin Graham, the Godfather of value investing and Dean of Wall Street. To ensure you... read more

Bullish on oil, Andurand Commodity Fund Manager Pierre Andurand looks around the world for justification of his long exposure. Since the start of 2017, patience has been emphasized by the... read more

This is part two of a two-part interview with Glenn Surowiec, founder of GDS Investments and advisory board member of Value Conferences. The interview is part of ValueWalk’s Value Fund... read more

The partner of two stock brokers involved implicated in insider trading at International Business Machines Corp. (NYSE:IBM) has been charged for crimes related to the same instance of illicit... read more

A federal court in New York ordered MF Global Holdings to-pay $100 million fine and ensured that the $1.2 billion of customer funds that were “unlawfully” used by the... read more

NetApp Inc. (NASDAQ:NTAP) released its earnings numbers for the second quarter in its financial 2014 this afternoon after the bell was rung on Wall Street. The company showed earnings... read more

With Bitcoin up a strong 321% year to date, cryptocurrency hedge fund manager John Chalekson looks like a genius. The crypto hedge fund, whose marketing materials for limited liability... read more