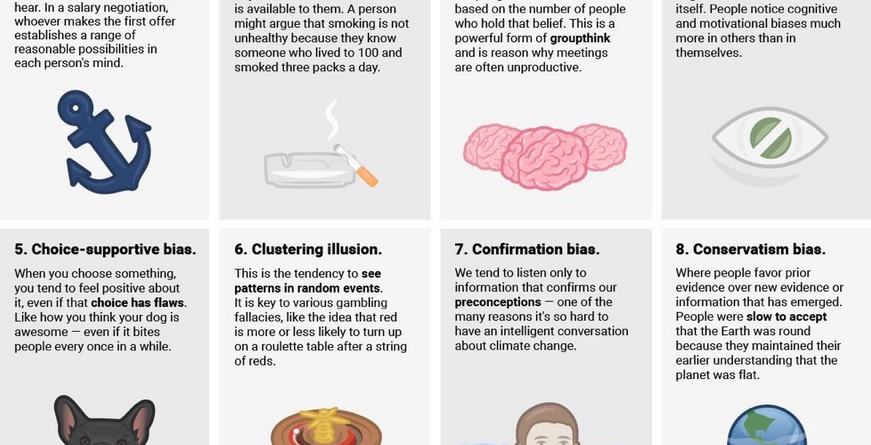 Recently we came across a graphic published by Business Insider showing 20 habits that can lead to bad decisions. Many of the errors listed below can also be applied to investing in financial markets, which is why we decided to attach the graphic and discuss most of the points. 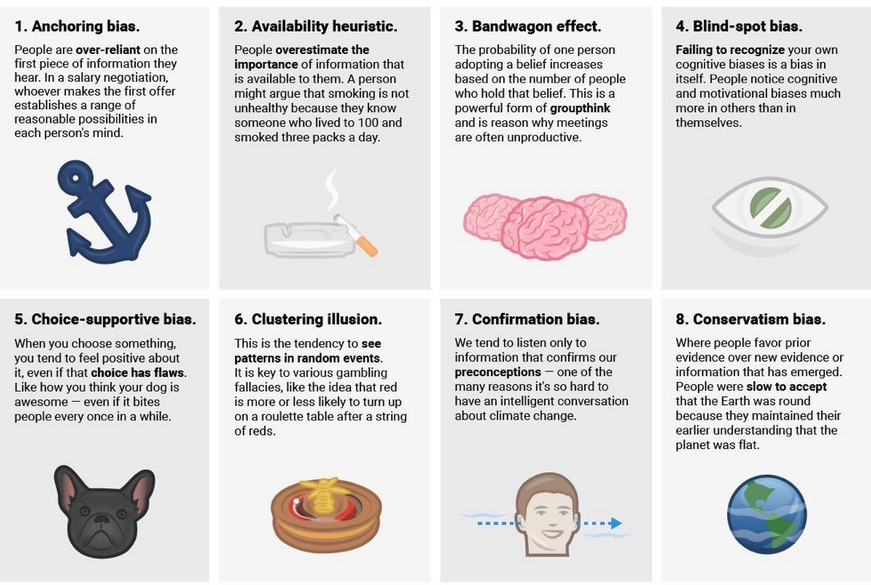 In case of financial markets, it’s better to call it herd thinking. We are talking about a situation where an investor makes specific decisions because a larger group of people does the same. On the stock exchange, this phenomenon is of key importance as it creates the best investment opportunities.

Example No. 1: Panic around uranium after the Fukushima disaster. Most thought it was the end of this commodity. Who calmly waited until the asset reached the bottom, has already earned few times on single jumps and will earn a lot in the coming years.

Example No. 2: Mania around Internet companies in the late 90s’. Lots of expensive companies that didn’t generate any profit. Perfect opportunities for shorting.

It is also herd thinking that makes the stock market the only place where people buy more and more as prices rise.

Investors are very often unable to notice their own prejudices. Especially if their decisions are based mainly on media news. We can, therefore, give an example of unwillingness to invest in demonized countries (example: Russia 2015/2016).

It applies to people who rely heavily on fundamental analysis. Any company, even the best one, can get off the road at some point. Another company with modern technology may appear, as well as the geopolitical situation may change to the disadvantage of the company selected by us. We just have no influence on such things, we can very rarely notice them in advance.

The most important thing in the next fundamental analysis is to consider that the fundamentals have deteriorated and that you should close your position, even with a loss.

This error also applies to our articles, in which we considered only one possible scenario. In this regard, thanks are due to those who wrote arguments against our theses in the comments, as well as sent analyzes in opposition to our thoughts.

Here we can refer to two groups related to financial markets. First of all, it is about investors who reject changes taking place in the world. Sometimes this applies to a particular industry (introduction of a new technology), and often it is about much larger changes (e.g., restrictions related to environmental pollution). Very often, such changes mean the end for one company and a bright future for another.

The same applies, however, to managers of listed companies. Enough is for the most important people miss new technology which enters the market or neglect to expand the offer, and it may end up quickly that the company will fall out of the market.

Currently, an example is the new electric cars models presentation by motor companies. The fight is underway for a new, undeveloped part of the market. From the investor’s perspective, the point is to choose future winners, not to see who has the best sales today.

Point 9 – The more information, the (not necessarily) better

Very common behaviour, especially when events on the stock market do not go our way. Investors assume then that they just need to know as much as possible. However, absorbing as much information as possible means sometimes making decisions by force.

In such situations, it is better to turn off the computer, go to training and possibly return to the topic the next day.

Certainly, this is a mistake that happens to investors operating according to the “buy and hold” principle. It has been described in point 5.

It is worth noting that the stock market is much more often seen as the opposite phenomenon. Namely: many investors overreact to negative information. This leads to one of the main sins of individual investors, i.e. closing positions at the worst moment – just after strong declines. Thanks to this, ordinary investors achieve results much worse than the main indices.

The antidote is to stick to your own pre-set rules. It is best if someone is focused only on long-term investing – then it is worth looking at the broker platform up to once a month and check the fundamentals of our investment from time to time.

Point 11 – Assessing decisions based on its effects

A point for philosophical considerations. No matter how you look at it, the result on the stock market counts. In practice, this means that someone based on herd thinking can make a profit for several years in a row.

However, this does not change the fact that the history of such an investor will probably end in a huge loss during a bear market, and he will get rid of the shares close to the bottom and will complain about the “unfair market”.

A very important element. Regardless of hours spent on analysis, you should never be overconfident. Even worse, if the investor feels most confident when everyone around is thinking the same. Universal compliance should be a warning to us. 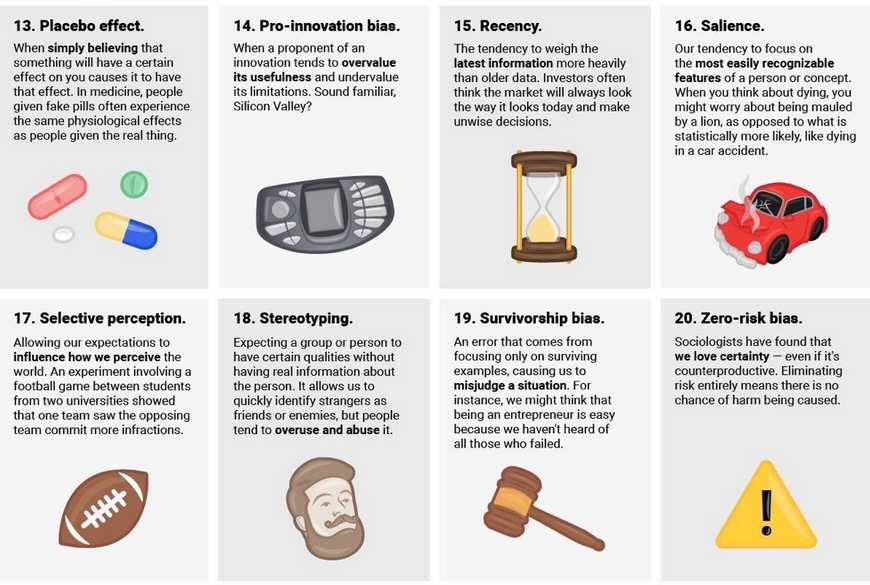 Extremely current topic. New technologies can be a breakthrough for the world, but this does not have to translate into investors’ profits.

At the end of the 90s’ there were a lot of interesting ideas for using the Internet. Not only that, many of these ideas later brought unimaginable profits. In the meantime, however, pioneering companies collapsed during the 2000-2002 slump and investors were left with nothing.

Today, the situation with technology companies is a bit better – the vast majority of them actually bring big profits. This does not change the fact that the valuations resemble 2000 and the technology industry will endure big declines. Then many investors in love with new technologies will panickly abandon shares.

Point 15 – Paying too much attention to recent information

Good results in the last quarter does not necessarily mean the company’s future success. Perhaps the abrupt increase in profit was caused by a single event, e.g. a sale of assets.

This point also applies to analyzes carried out for too short periods of time. Considering the years 2010-2018, we can quickly conclude that real estate and shares guarantee profits, while metals and commodities should be kept away.

On the stock market, stereotypes sometimes become a self-fulfilling prophecy (similar to some elements of technical analysis).

Financial markets are very volatile and unpredictable environment. People who want to invest their funds safely can choose bonds based, as this was an asset characterized by relatively low volatility over decades.

Meanwhile, many aspects show that in the years to come bonds will become a guarantee of loss if held till maturity – mainly due to high inflation, which will devalue debt.

It may therefore turn out that choosing the safest asset so far … will not provide security. A better choice is diversification of assets, i.e. distribution of capital, e.g., between gold, real estate, shares, commodities and cash.

The list of mistakes made by investors is long, and we could certainly expand it by another dozen or so points. It is worth to bear this in mind and constantly analyzing yourself in terms of psychology. In our opinion, this is (wrongly) the most overlooked aspect of investing.

Warren Buffett on Business, Analysis and Investing Published on Aug 7, 2016 A Q&A with Warren Buffett at the University of North Carolina. In this discussion Warren begins with his... Read More

Mohnish Pabrai talks at Google Moderated by Saurabh Madaan published on Jun 23, 2017. This is the full transcript this might contain errors and should not be relyed upon -... Read More 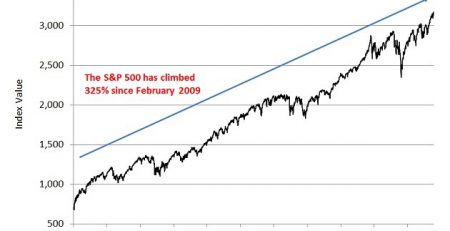