BP Is an integrated oil and gas company, and the dividend yield has risen to a well-above-average 6.6%. This article reviews the reasons the yield has gotten high, the strengths of BP’s investment portfolio (upstream and downstream), financial position, cash flows, valuation and risks. We conclude with our opinion about whether or not the big yield is attractive and worth considering for income-focused investors.

BP is an integrated oil and gas company that explores for, produces, and refines oil around the world. It has operations in 78 countries across 5 continents. Per the company’s annual report, in 2018 BP produced 2.2 million barrels of liquids and 7.7 billion cubic feet of natural gas per day.

For perspective , BP operates in the following 2 main segments:

BP’s dividend payments to investors have remained relatively steady (and even increased modestly) in recent years, as shown in the following chart (we’ll cover the big decline in a moment). However, the dividend yield is higher than normal (thanks to a share price decline over the last year). 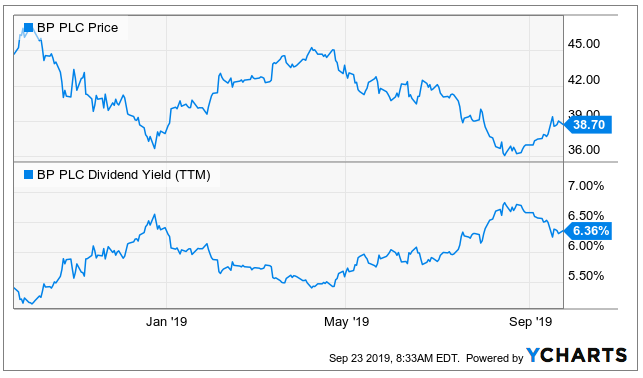 BP’s recent share price decline (which has mathematically caused the dividend yield to increase) is due to a variety of factors, including the oil price recession of 2015-2016, the deepwater horizon oil spill in 2010, and volatility in oil prices this year (notably the recent attack on Saudia Arabia oil fields). For perspective, here is a look at the historical “point-in-time” dividend yield over the last 20 years.

Regarding the oil price recession of 2015-2016, the spot price of brent fell from over $120 per barrel to under $30, thereby creating volatility and uncertainty in the industry. The price has since recovered to around $68 currently, and BP was able to maintain (and even grow) its dividend payments during and following this period thanks to financial strengths and business improvements.

However, it was the horizon deepwater oil spill in 2010 the caused the dividend to be cut. Since then, BP did reach a settlement with the U.S. federal government and Gulf states in 2016, thereby resulting in a reliable estimate of all its remaining Gulf of Mexico liabilities and eliminating the uncertainty about future obligations, which is a good thing for BP. Specifically, BP still remains on the hook for $23 billion to be paid over the next 17 years. As of 2018, cleanup costs, charges and penalties have accounted for more than $65 billion of the companies expenses. With $2.0 billion to be paid in 2019 and about $1.0 billion per year thereafter, BP has managed to put the major outlays behind it and can now focus on meeting its liabilities with the proceeds generated from its targeted asset sales of $2 billion-$3 billion per year.

Finally, a recent 2019 attack (presumably by Iran) on Saudi Arabian oil fields has added uncertainty and fear to global oil markets and BP’s share price, thereby decreasing the price and causing the dividend yield to rise.

In its upstream business, BP expects major projects to add (net) more than 1 million barrels of new oil equivalent production per day by 2021 versus 2016. Further, these new projects should deliver on average approximately 35% better margins compared to the 2015 portfolio, contributing materially to growth in operating cash flow over the medium term. Also worth mentioning, BP is already seeing the benefits of its`1 significant build phase in the past few years hitting the bottom line. For example, ROACE almost doubled in 2018 versus 2017, to 11.2% (see chart below). This was furthered by BP’s sales of its low ROACE assets such as Prudhoe bay and Trans Alaska Pipeline in Alaska. BP expects its ROACE to be above 10% by 2021, which it has already exceeded. 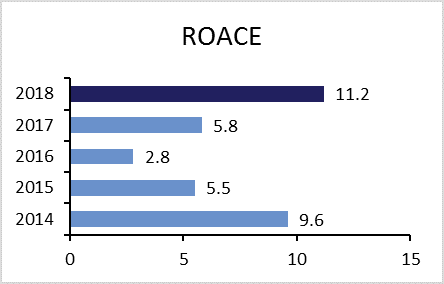 In its downstream segment, BP’s 2019 refining capacity is 30% below 2010 levels. And while capacity has declined, the smaller portfolio is higher quality with a portfolio complexity rating of an estimated 10.7. For example, BP’s refining marker margin (“RMM” has averaged above $14 per barrel in most years since 2006. Also, BP now has 40% of its capacity is in the US, with the bulk in the midcontinent, making it well-positioned to capitalize on cost-advantaged crude and low-cost natural gas.

Overall, BP has reduced its production costs by 20% or $7 billion since 2014 (BP 2018 20-F). It has also reduced capital spending per barrel by nearly 50% by improving its operating performance in offshore drilling. The Company has made great strides in “high-grading” its portfolio and reducing costs so that its break-even level has fallen to $50/bbl in 2018.

For example, BP recently sold its assets in Prudhoe Bay and the Trans Alaska Pipeline. For background, BP’s operations in the prolific oil field at Prudhoe Bay and the 800-mile Trans Alaska Pipeline in Alaska date back to 1959. However, with the oil production in the region declining, BP has steadily been reducing its role in Alaska. And in 2014, BP sold half of its share in an Alaskan project to Hilcorp, and then in 2019, sold the entirety of its stake in Prudhoe Bay and Trans Alaska Pipeline to the same buyer. The deal calls for an initial payment of $4 billion to BP with the remaining $1.6 billion in earnout periods over time. Further, BP plans to sell $10 billion of properties to speed up its newer projects and reduce its debt.

From a valuation standpoint, BP is inexpensive relative history and relative to peers. For example, its EV/EBITDA of 5.4x is below its peer average while its dividend yield is on the higher end of the spectrum (see table below). Further, the cost reduction and strengthening financial position are expected to improve ROE, ROA and free cash flow, thereby creating the possibility for multiple expansion (i.e. the share price should rise).

Political risk is another risk factor for BP. For example, approximately 35% of its reserves come from its 20% ownership in Rosneft, a Russian integrated energy company. Further, the history and potential for environmental disasters keeps the company high on the radar of of many investor and non-investor constituents. Despite these risks, we believe BP offers a large durable dividend within the volatile energy sector.

BP is an attractive investment for income-focused investors because its current yield is high and its dividend payments are healthy. Further, due to its strengthening business, cost reductions and improving cash flows, we’ve ranked it #5 on our list of Top 5 Big Safe Yields (Energy Sector), plus we believe there is room for the share price to rise from here. If you are looking for a big durable yield within the beaten-up energy sector, BP is absolutely worth considering.

Howard Marks: There is absolutely a paucity of bargain price distressed opportunities

Japan’s Prime Minister, Yoshihiko Noda took control in September 2011, has had sales tax on his agenda and finally we are seeing his party, Democratic Party of Japan, submitting... Read More

Results for Express Scripts Holding Company (NASDAQ:ESRX) are highly anticipated as analysts from Wall Street predict a great showing from the company. It has been predicted that profits per share will... Read More