Energy Evolution: Change is coming, but it will take time – ValueWalk Premium

It is undeniable that as a species we have successfully adapted for thousands of years and we will continue to do so as new challenges arise. Greenhouse gasses and global warming are not new concepts of discovery; however, rapidly increasing natural disasters, such as hurricane Dorian and raging forest fires in the Amazon, bring the topic front and center through popular media. Emissions have grown exponentially this century (Chart 2) contributing to global warming and adding to the rise in natural disasters. Action on climate change has become top of mind for many of our world’s leaders.

Canada ratified the Paris Agreement on October 5, 2016 following a vote in Parliament. The agreement was then entered into force on November 4 in pursuit of achieving a carbon-neutral economy by the middle of the century. Renewable energy initiatives are no longer an option for oil and gas companies, but rather necessary in order to stay relevant in the uncertainty that exists within the energy industry. The demand for new energy sources is connected to three main drivers: policy, technology and consumer preferences.

With the backing of policies such as tax incentives, new technology is developed with the bottom line in mind – to do more with less. Ultimately, energy is inevitably needed in all facets for the modern consumer, but with increased technological innovation, producers can lower costs and lower emissions – all while meeting the pressures of increased demand. 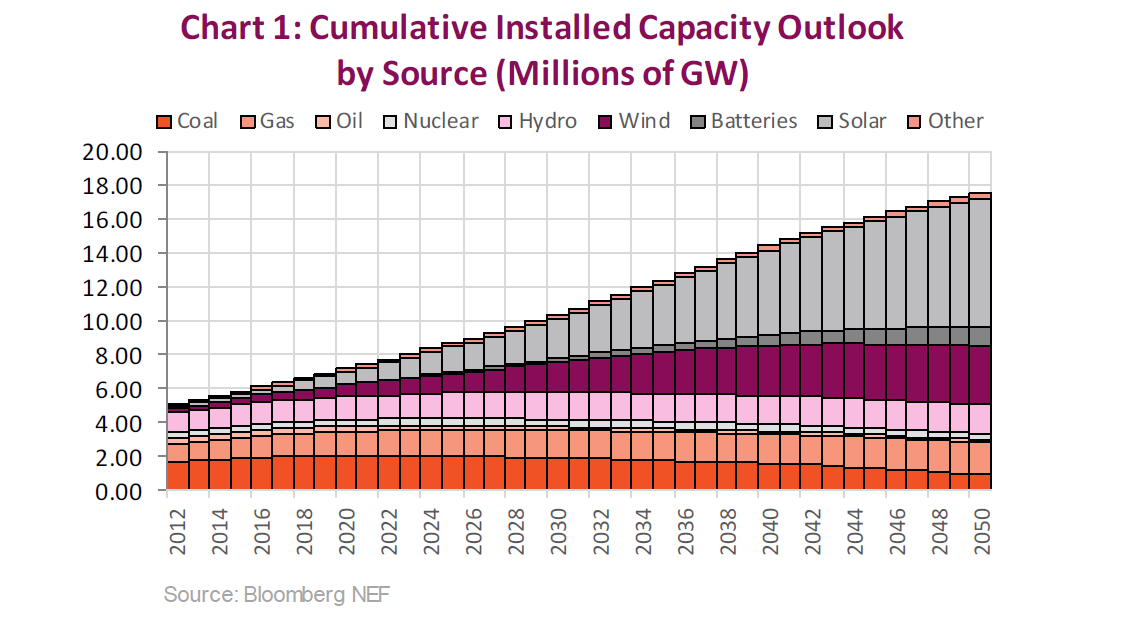 Growing global prosperity and the expected growth in population is only going to increase energy reliance (Chart 1). Alternative sources of power are gaining ground on hydrocarbons, but the world still deeply depends on oil, coal and natural gas for roughly 80% of energy consumption. 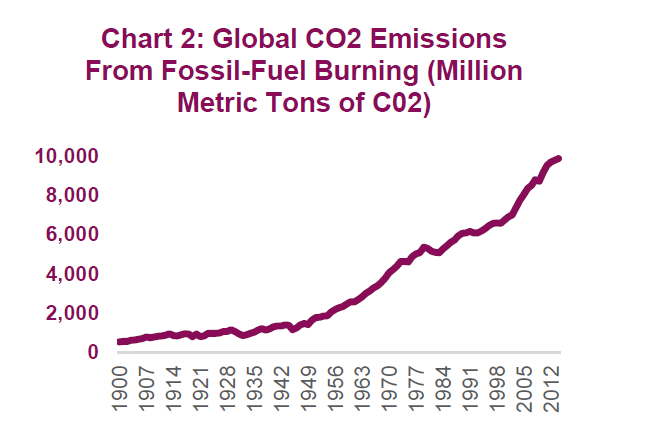 The sector is shrinking but demand is growing

The relative size of the energy sector in North America has been decimated in the past 10 to 15 years (Chart 3). However, the biggest hurdle for traditional exploration and production companies, particularly in Canada, is not coming from the threat of alternative fuels but their inability to get product to market fast enough. This is due to the discrepancy between cost of production and efficiency versus the rate of consumption. In North America there are currently 153 proposed pipelines but, over the past decade, very few have been completed, with the big three – Keystone XL, Trans Mountain and Line 3 – all still in limbo. 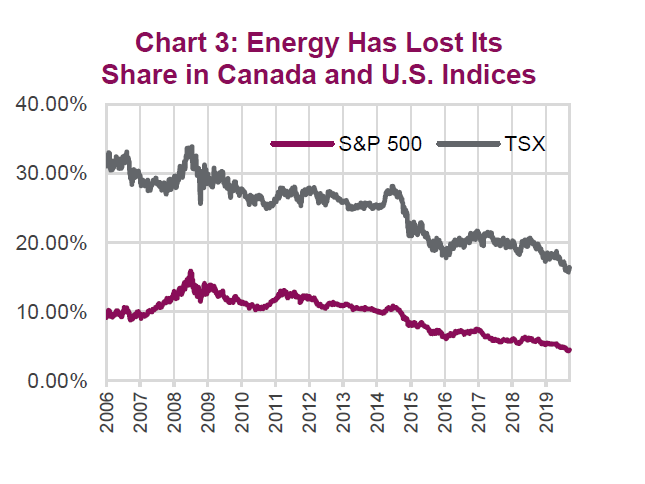 Resistance to construct new pipelines has come from a variety of stakeholders and has likely cost Canada an opportunity to become a world leader in liquified natural gas as global conglomerates, Shell, ConocoPhillips, Statoil ASA and Total SA have backed away from investing in major export terminal projects. In 2017 alone, foreign oil majors sold over $23 billion in Canadian assets (Reuters). This has added to the woes of the energy sector, which has seen its prominence on the TSX halve in the last 13 years despite oil prices being within a few dollars of where they were at the start of 2006.

The lack of investment has further challenged smaller players, which were relying on take-away capacity and foreign investment for future growth. That might present an opportunity for consolidation; unfortunately, with a pending federal election, foreign corporations have been slow to act.

It is undoubtably a challenging environment for the sector, but innovation has been flourishing and incumbents are embracing change. EOG Resources Inc. recently completed its latest well using a new technology developed by a small services firm that promises to slash the cost of each well by up to $350K, with a system called electric fracking. On September 10, Suncor announced it is investing $1.4 billion to convert two coke-fired boilers with cogeneration units at its oilsands base plant to make it more energy efficient as well as improve cash flow.

In May, BP PLC shareholders voted for the company to issue a report on how each new project will align with the Paris Accord. Last week, CEO Robert Dudley announced BP will sell some oil projects and curb the development of others to meet the Paris standards. A report will be issued at the next AGM in 2020. “Our strategy is to produce advantaged barrels, which involves considering factors like whether they are economic to produce, low risk to bring to market and lower carbon from an emissions standpoint,” Dudley said.

Exxon Mobile is also joining in and has committed a billion dollars of capital to alternative energy research.

The shift away from its core business is a signal that big oil sees a growing threat but is also willing to capitalize on the opportunities in alternative fuel sources. The price of renewable energy is slowly declining over time, whereas oil has been consistently volatile. This makes it easier for purchasing managers to make investment decisions based on renewable energy forecasts. Transportation costs of energy are also much lower for electricity than crude oil or gas. Bloomberg data estimates cumulative capacity installed will go from 6.8 million gigawatts today to 17.5 million gigawatts by midway through the century.

Change is coming, but it will take time

Current energy infrastructure globally has been built out around oil, refineries and gasoline. Some 36% of demand for crude oil is accounted for from vehicle categories susceptible to electrification. Demand for electric vehicles is still impeded by a higher sticker price for fully electric to internal combustion engines (ICE). Without subsidies, that divide is likely to persist until midway through the next decade. That equates to a highly defendable position for oil and ICE vehicles over the medium term. 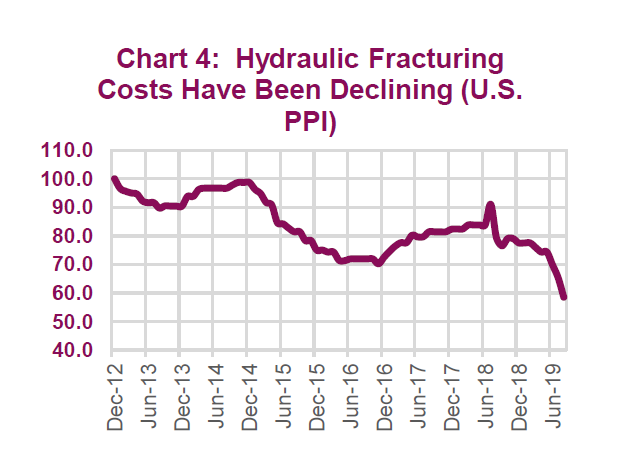 It is worth noting that technological developments and cost reductions are not just happening on the renewable side. As previously discussed, the cost of extracting oil has been falling precipitously over the past decade because of things like steam-assisted gravity drainage (SAGD) and fracking (Chart 4). This has made resources that were once considered unfathomable to extract now economical. Innovation is likely to sustain the moat of hydrocarbon fuel sources for years to come.

In addition to scale, convenience provides a massive moat around the oil industry. Solar and wind in particular have immense storage issues when the sun isn’t shining, and the wind isn’t blowing. Oil can be there for when you need it and it is; with the push of a button, an oil trader can access thousands of barrels of oil. Renewable sources will need to drastically increase scale before they pose a formidable threat to oil (Chart 5). Bloomberg is estimating enormous growth in the install base off wind, solar, battery and other renewable sources over the coming decades as the cost of such technology continues to fall. (Chart 6) 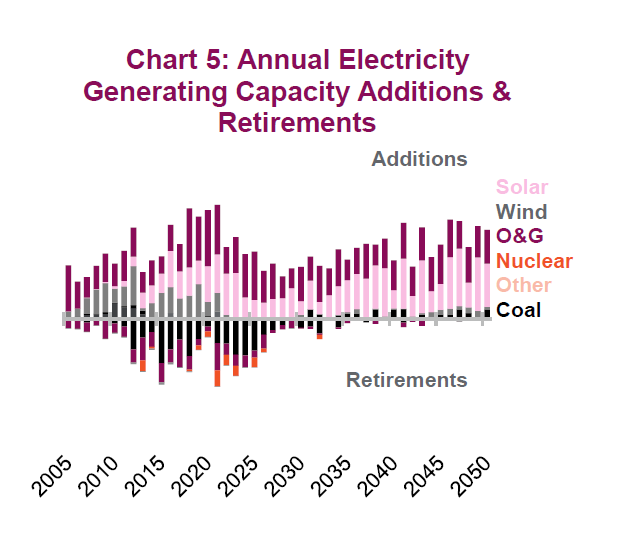 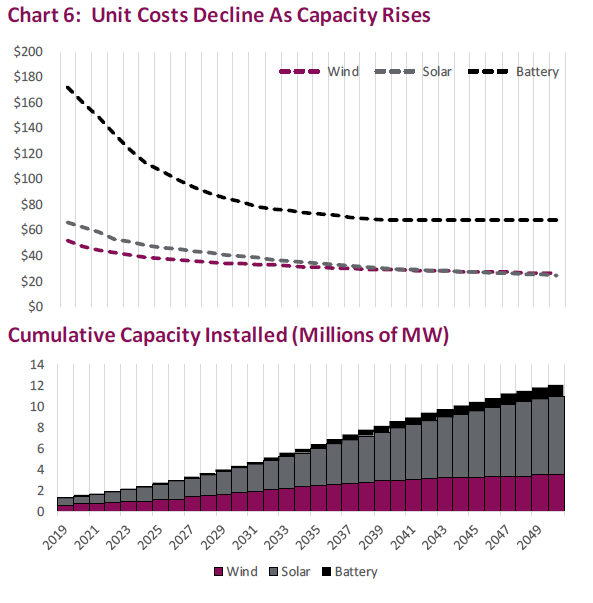 The infrastructure already in place for the oil industry and environmental advantage of renewable energy are both undeniable comparative advantages. Oil projects go through a life cycle – investment, slow output, increasing output, falling output and obsolescence. So that means every year replacements need to take place to maintain global production. A report from Wood Mackenzie shows that even with no growth there is going to be a need for 16 million barrels a day of oil that has yet to be discovered. However, if the world expedites carbon cuts, that demand could be cut by 67%, allocated to alternative fuel sources.

The average reserve-to-production ratio is about 10 years for oil projects and 25 years for wind and solar, according to BNP Asset Management. Looking at the total spend in 2018 on gasoline mobility, BNP estimates that over the next 25 years about $25 trillion will be spent on similar efforts. The estimate for renewables to compete with the enhanced network infrastructure to match that level of spending will only take $4.6-5.2 trillion.

Energy demand is not waning, only growing; but as a society, we are becoming more cognizant of our carbon footprint and looking to do more with less. Big oil has recognized this and is trying to get ahead of the curve to maintain its dominance in the industry. As professional investors, we are evaluating the landscape on a daily basis, looking for companies that are embracing change and poised to grow and capitalize on the increasing shifts in demand.

Bernanke (Once Again) Calls Out The Wall Street Journal

As hedge fund managers watch the Fed closely for practical signs of tightening, with some Fed watchers saying Janet Yellen has already engineered the start of a restrictive monetary... Read More

Founder vs. CEO: Who Creates More Value? by Kyle Stanford, PitchBook In many ways, founders are the soul of a company. That’s one of the reasons why many investors prefer... Read More

Gene Munster, an analyst with Piper Jaffray, has painted a bullish picture on Apple Inc. (NASDAQ:AAPL) stock ahead of an earnings report release next week. The main highlight of his optimistic... Read More