The negative commentary around the current state of flows has become monotonous. Redemption pressures continued into August making it the sixth consecutive month of outflow and eleventh in the last twelve. It has been more than a year since the majority of managers’ data has indicated widespread allocations.

This August offered a break from this new normal in both positive, and still yet negative ways. On the bright side there were targeted allocations to segments which have not seen interest in quite awhile, but it was also the first August since eVestment began tracking monthly asset flows in 2009 that the industry had aggregate outflows during this month.

As we have noted repeatedly in these reports, the problem is not a hedge fund problem per se, it is most likely a mismatch between expectations and cost and the issues are not affecting the entire industry. We could comment on numerous success stories, but that would leave the majority feeling we are not understanding the dominant theme. 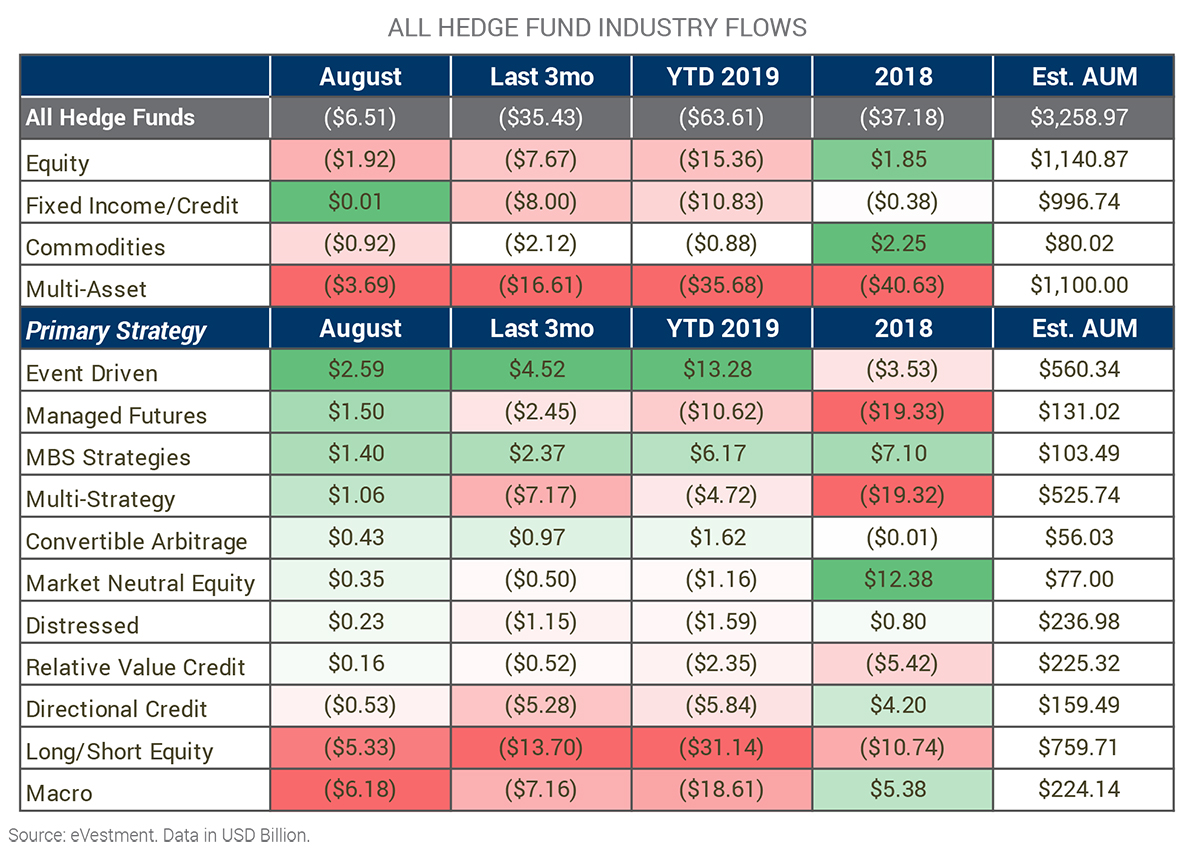 The negative commentary around the current state of flows has become monotonous. August redemptions were the sixth consecutive month of outflow and eleventh in the last twelve, and it has been more than a year since the majority of managers’ data has indicated widespread allocations, but this August was special because it was the first August since eVestment began tracking monthly asset flows in 2009 that the industry had aggregate outflows. While there were some highlights which we note below, on the surface August was another in a string of difficult months for the industry.

There are two ways to interpret the fact that redemptions were not widespread across strategies in August.

First, the majority of redemptions came from macro and long/short equity strategies in August and outside of these two segments flows were net positive during the month. This would seem like a positive point for the industry (ignoring for now the fact that inflows in August used to be the status quo), but the second issue is that in categories which had net inflows, rarely did the majority of products actually receive net inflows. Only within event driven did more products have inflows than outflows.

In their recent episode of the VALUE: After Hours Podcast, Taylor, Brewster, and Carlisle discussed Grantham’s Everything Bubble. Here’s an excerpt from the episode: Q2 2021 hedge fund letters, conferences... Read More

What do big hedge funds, institutional investors, pension funds etc. have in common with Millennials? If you guessed safe spaces you are correct! We live in uncertain times and it... Read More