Is The Bear Market Coming? Buybacks In The U.S. Are Massively Falling. – ValueWalk Premium

Companies listed on the stock exchange may reward their shareholders in two main ways: by buying back their shares or by paying dividends. Let us remind you the meaning of the former.

Share repurchase or buyback is a transaction whereby a company buys back its own shares from the stock market. After repurchase, the shares are canceled or held as treasury shares, so they are no longer held publicly and are not outstanding. Because a share repurchase reduces the number of shares in circulation, it inflates prices of the existing shares trading on the market.

Also companies buying back their shares create additional demand on the market. Let’s assume that on the regular market we demand for 200 000 shares, if the company buys additional 200 000 shares then we automatically have large advantage of buyers over sellers which eventually increase share prices even more. Of course, when we have less stocks in circulation then existing shareholders increase their shares in the company.

Over the last two quarters companies has decreased their amount of share repurchases. In the second quarter of 2019 U.S. companies spent 166 billion USD on buybacks. In the first quarter it was 205 billion USD and 223 billion USD in the last quarter of 2018. Previously, when amount of buybacks started to decrease from quarter to quarter, S&P 500 index fell into a bear market, which is shown on the chart below (years 2000-2001 and 2007-2009). 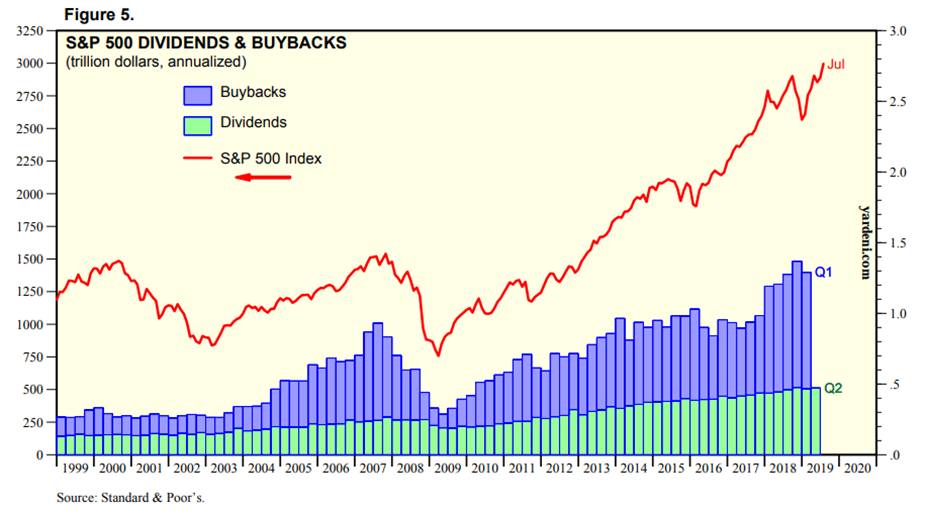 This time, the relation between buybacks and the S&P 500 has not been that clearly seen yet, but when we get into details then we can see that small companies are already showing significant weakness.

Russell 2000 Index (blue line), consisting of small capitalization companies has lost more than 12% in one year. On the other hand, the S&P 500 Index (green line), has barely changed. There is a reason for that – small companies has not been supported by buybacks as it was the case of large companies in the S&P 500 index. Currently, when share repurchases are also falling for the S&P we have much greater risk of share prices declines than in the last few years.

Share repurchases make sense only when the stock market prices are low, for example near the end of the bear market. We could assume that when the company’s Price to Book Value is below 1, then it is cheap to conduct buybacks. For instance, when P/BV = 0.90 then the company pay 0.90 USD for 1 USD of the company’s wealth. So, when valuations are relatively low it is a good moment to buy back shares, otherwise, it is simply not financially effective.

Currently, the stock market in the U.S. is highly overvalued by almost every measure. 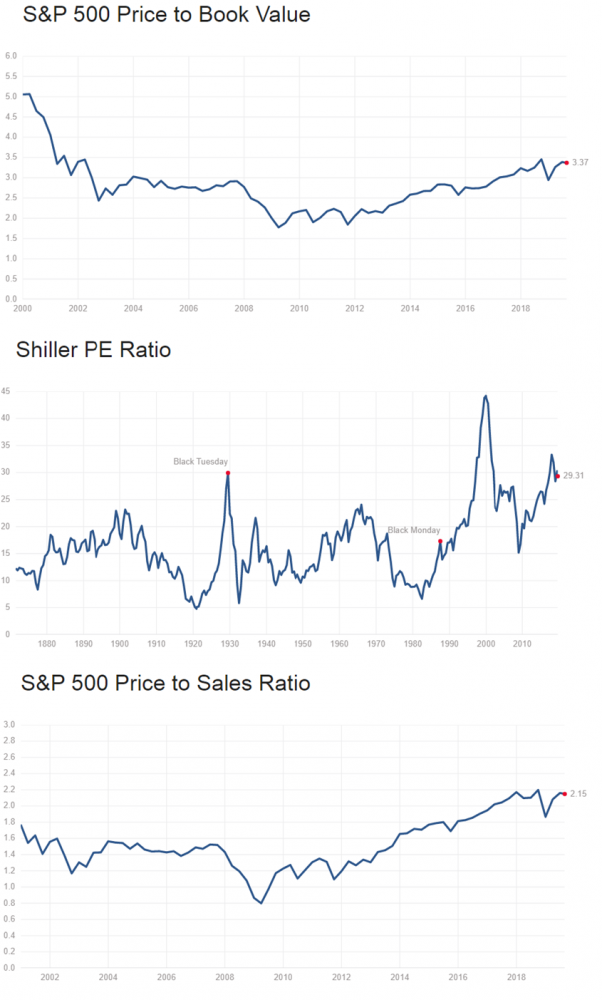 Price to Book Value and Price to Sales of the S&P 500 companies are 3.37 and 2.15, respectively. This is a higher level than it was at the peak of 2007, just before the Great Financial Crisis. CAPE or Shiller PE ratio (29.31) is at a higher level than 98% of the time over the last 140 years. We do not mention Price to Earnings ratio because this indicator is sometimes misleading due to companies earnings manipulation. Book value, sales or CAPE can not be manipulated to that much extent.

As you can see, share repurchases at this level are definitely not beneficial for the company and its shareholders. Thus, why companies conduct buybacks when their share prices are significantly overvalued? 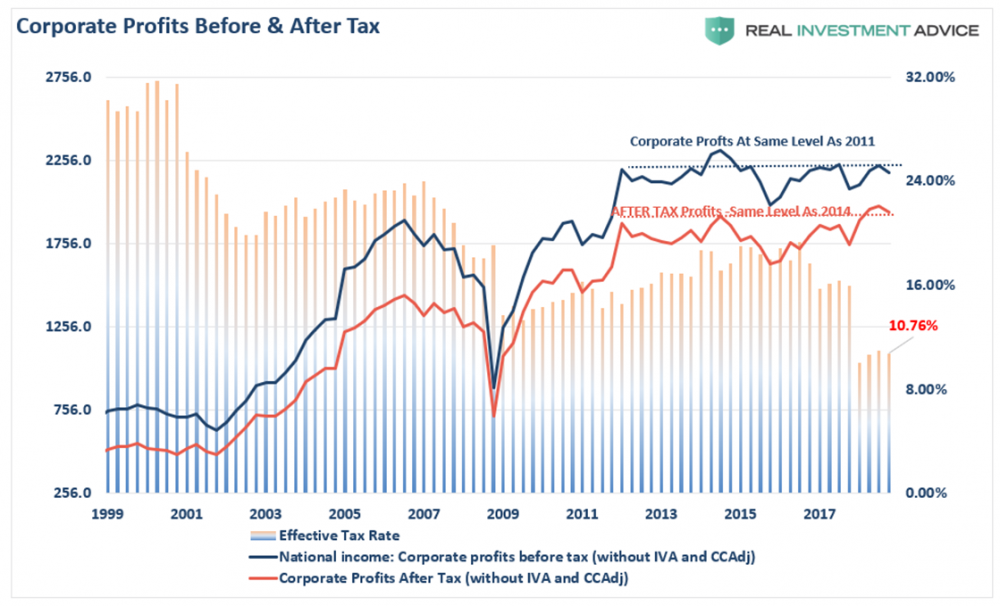 So, in reality stock buybacks artificially increase earnings which gives an illusion of increasing companies’ profitability. Does it create real value for shareholders? Now, you can answer it yourself.

Another important example – selfish activities of the companies’ management. When company buy back their shares near record highs, it simply inflate the share prices even more which allows the management of the company (the so called insiders) to get rid off their shares at higher prices.

Looking at the insiders data we find that they sell their shares at the pace not seen since 2006 and 2007. TrimTabs Investment Research reported that corporate insiders sold in August, on average 600 million USD of stock per day. It was also the fifth consecutive month in which insider selling reached 10 billion USD. Of course, it is important to emphasize that companies’ management always sell more than it buys because they receive remuneration in call options which in simple words translate into companies’ shares after some time. We may read it, however, as a lack of confidence in the market because when insiders significantly sell, it’s a sign that they perceive companies’ valuations as high. Their bonuses are also based on earnings growth, so when they expect it to be lower, they sell shares to offset this decrease. Thus, it is another important factor to consider when analyzing the market.

Now, let us take an example when companies actually should buy their shares.

As we have mentioned before, buybacks should be conducted when valuations are at relatively low levels. This is the case of Poland from which the portal comes. Over the last 18 months, the Warsaw Stock Exchange has experienced a high rate of share repurchases. Looking at valuations it is very understandable. SWIG80, the index of small companies has P/E = 9.7 and P/BV = 1.18. Thus, this move can be perceived in two ways: main shareholders purchase shares either to have a larger package by exploiting attractive valuations or they want to withdraw the company from the stock exchange. And these activities in terms of buybacks actually make sense.

We want to point out that stock buybacks made at record prices are harmful to companies and instead of doing them enterprises should be issuing shares and selling them at high prices for the street (or the so called dumb money). One may say that it is immoral but this is in the company’s interest – issue and sale of new shares when they are ridiculously expensive as it is now. In this way the company is able to obtain a lot of new capital without significantly diluting its shares. Unfortunately, it is difficult to name such a company in the U.S.

Falling number of buybacks may mean that companies’ management lost their faith in further stocks prices increases. That eventually may lead to self-fulfilling prophecy and sharp stock market declines. These declines will immediately translate to dramatic economic situation, firstly in the manufacturing sector which is already showing signs of weakness. 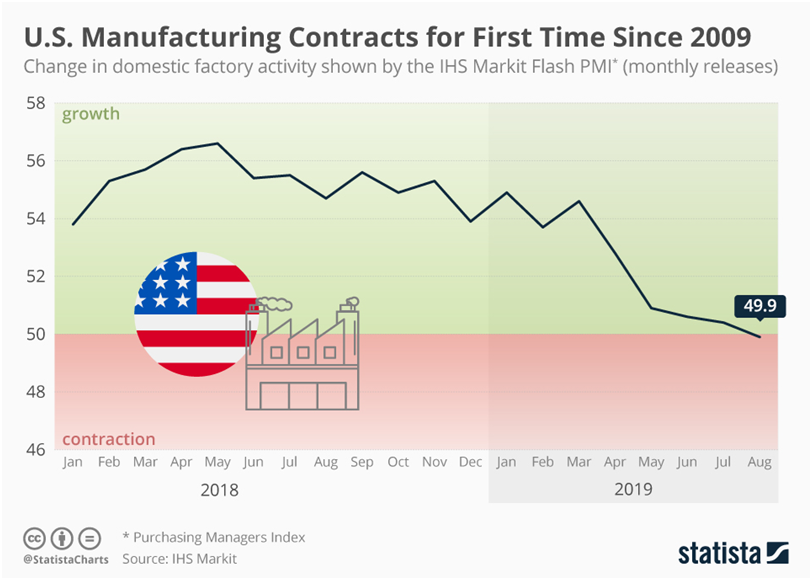 As you can see on the chart, U.S. manufacturing sector contracted for the first time since September 2009 (a few months after the end of the previous bear market). Euro Area, China, South Korea and Japan manufacturing have already been in contraction since several months.

Service sector seems to be more resilient, however, as history shows services usually quickly follow the weakness of the manufacturing sector.

In addition, the difference between 10-year and 2-year U.S. bonds yields has turned negative (yield curve inversion) for the first time since the last financial crisis which in the past has preceded almost every recession by 8-18 months. As it was not enough, the difference between 10-year and 3-month U.S. bonds yields have been negative for 3 consecutive months. The track record it had in predicting recessions in the past is 100%. First chart below is showing 10-year and 2-year yields difference, second chart 10-year and 3-month yields difference. 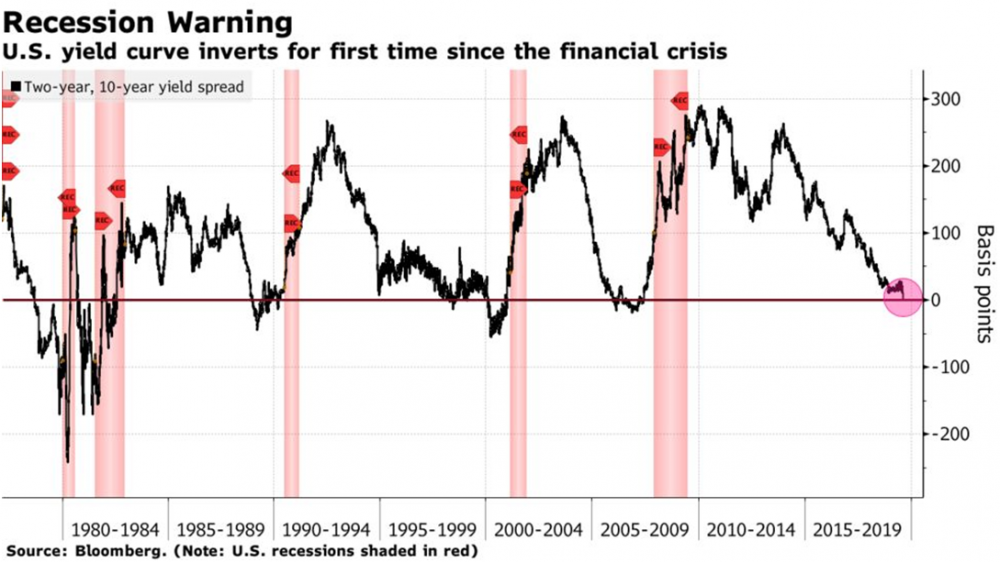 In our opinion, it is not a good moment for investing in the U.S. stock market. Investors have already started to look for safety, as a result of which gold, silver and bonds have recorded large prices increases.

Via SG Investor A simple rule dictates my buying: Be fearful when others are greedy, and be greedy when others are fearful Warren Buffett This phrase is one I believe resonates deeply... read more

The Fed May Give Trump His Rate Cut, But It Won’t Help

Investors are in a buying mood despite many economic warning signs. Why? Q2 hedge fund letters, conference, scoops etc kalhh / Pixabay For some, it’s because they expect the Federal Reserve to cut... read more

To Win With "Smart Beta" Ask If The Price Is Right Rob Arnott, Noah Beck, and Vitali Kalesnik, Ph.D - Research Affiliates Key Points Over the past half-century, almost all of... read more

Many investors consider market capitalization to be a central measure of risk. However, when one looks at an index qualitatively, as opposed to quantitatively, one may question the validity... read more

Every year there's a deluge of white papers and studies published on the world of finance. These papers cover every aspect of finance and some are more valuable than others. To... read more