What Guides Warren Buffett In The Selection Of Companies? – ValueWalk Premium

Warren Buffet, also called the “The Oracle of Omaha” is undoubtedly one of the greatest investors of all time. In his “Letters to shareholders”, which he continuously publishing since 1977, he has given investors many tips about the valuation of the listed companies – it is a real great piece of knowledge. Based on the texts and interviews with Buffett, it can be safely stated that one of his favorite indicators that he uses when selecting companies for the portfolio is ROE.

In previous articles on P/E and P/BV we explained what earnings and shareholders' equity are. Because of that we can now easily describe what ROE is (return on equity).

ROE  in fact, is a very simple indicator that compares a company's net profit (after tax) to shareholders' equity. The result is expressed in %.

We know from previous articles that equity is all the company's assets minus its liabilities, both long-term and short-term. The indicator may also be negative if the company generates losses.

Why does Warren Buffett appreciate ROE so much?

He believes that there is nothing attractive in a company that increases its profits at a rate similar to the increase in equity. Real opportunity to buy are companies that generate profits faster than they increase their own capital. According to the legendary investor, a company that can achieve consistently high returns on its capital must have competitive market advantage. Why?

High returns in an industry very quickly attracts competitors. Here is an example:

Let's say that when we hear about legalizing marijuana we are opening a plantation. We have invested 1 million USD in business. After a year, it turned out that the demand for our product was so great that we generated 600,000 USD profit. Our ROE is 60%. In the following year, competition saw the opportunity. Two more plantations have opened in the same region and have taken over some of the customers. We are able to generate only 200,000 USD from this 1 million USD. Our ROE fell to 20%.

Based on the above example, it can be seen that companies that manage to maintain high ROE must cope with competition and they do it in many ways:

In summary, companies with high ROE are usually worth attention. Their management can generate considerable profits based on the capital that the company has at its disposal.

What ROE values are good?

The rule is simple: the higher the ROE the better. Each investor can set his own criteria, but it is quite often assumed that: 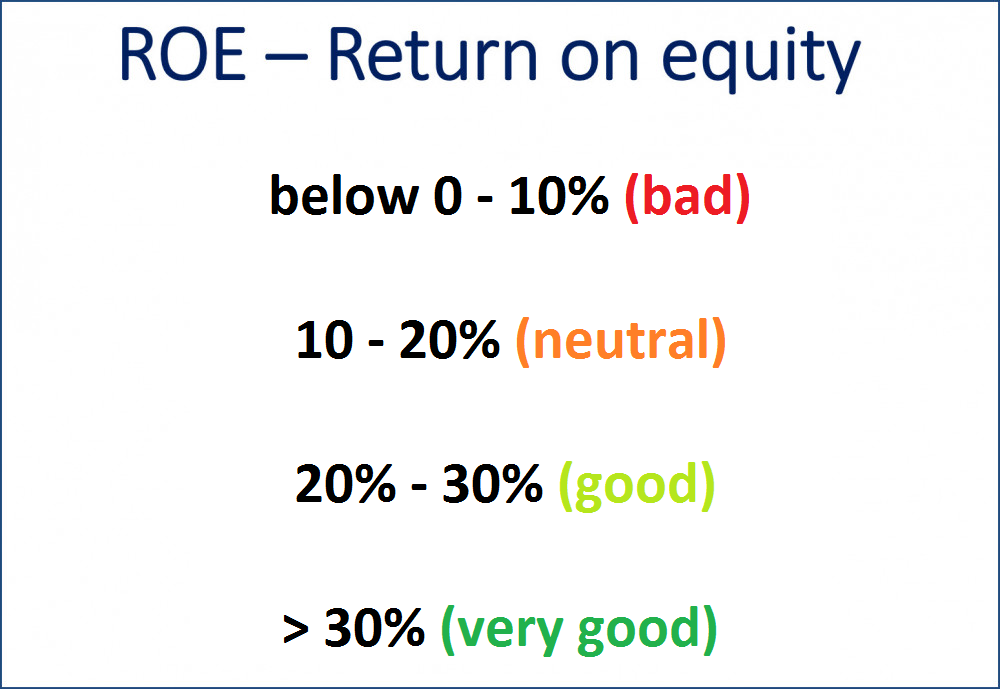 Companies with negative ROE (generating losses) should be avoided. We accept values above 10% as decency limits. Companies that cannot achieve this result are probably not doing well.

When determining optimal index values, you can also refer to a specific stock exchange or to the sector in which the company operates. In the long run, the average ROE for companies in the S&P 500 is 15%. So we can see that the scale presented above goes a little further. In fact, currently, of over 7,000 companies listed in the US, only about 400 have ROE above 30%. It is less than 6% of all companies, which narrows down the research.

The cumulative effect of attractive ROE

Warren Buffett's investment philosophy, like most long-term investors, is based on the so-called compound interest. In short, it can be described as a “snowball effect”. Each profit generated from the investment increases our capital, which we can reinvest in the following years. The longer the process lasts, the more we earn.

The situation is similar for positive ROE. In the table below, we compare 2 companies, one (A) has a return on equity of 30%, the other (B) of 10%.

Let us assume (which is rare in practice) that both companies will generate the same ROE year by year over the next 10 years. The first company (A) generates 30% and the second (B) 10%, both do not pay dividends to shareholders. After each year, profit will be included in the company's capital, increasing it. Company B after 10 years will have a value of approx. 13 million USD…

This is the strength of accumulated ROE.

How to combine ROE with P/E?

Looking at it from the many years perspective, it may turn out that sometimes it is worth paying a little more for a company with a very good ROE than for an undervalued one, e.g. according to the P/E or P/BV ratio, which is not able to use its own capital well. Following this principle and comparing ROE to P/E (price to earnings), which we discussed earlier, we can determine the following:

From the fundamental analysis point of view, Tesla is a terrible investment because it generates losses and (for a long time) has a negative ROE. Buffett's favourite company Apple is quite expensive because its P/E is 18. Still, it is an acceptable investment because very high ROE indicates that the company in a few years may be worth much more than today. The best solution is Rio Tinto with a P/E of 6.6 and a high ROE of over 30%. There is no doubt here. The company is cheap and generates excellent profits based on its capital. Such a low P/E for RIO results from the fact that investors are afraid of investing in companies that give exposure to industrial commodities, which they suffer the most during the economic slowdown. Nevertheless, in the next few years, Rio Tinto may prove to be a very good choice, provided that it manages to maintain high ROE.

Reasons why ROE is rapidly falling or rising

Is investing in companies with high ROE a guarantee of success? Of course not, although it must be admitted that it is one of the most important indicators used in fundamental analysis. Despite its usefulness, it can be misleading just like any other indicator.

Sometimes ROE drops sharply. Generally, as we mentioned earlier, it is a negative symptom. Most often it is caused by increased competition in a given industry, but there may be other reasons.

ROE may also increase rapidly and this is not always a good sign.

Undoubtedly, ROE is a very useful indicator. It shows not only the current situation of the company, but also the ability of its management board to generate profits. The indicator fits perfectly into Warren Buffett's investment strategy who once described it in one sentence – “Buying well-managed enterprises, in whole or in part, which have beneficial and sustainable economic features.”

If we are dealing with a company that has an attractive ROE year after year, we will most likely be satisfied with it after several years. One should only remember that ROE, like any other indicator of fundamental analysis, is not perfect. It is always worth comparing its values with other ratios, e.g., P/E or the degree of debt.

Last week, President Biden released a $6+ trillion budget proposal that would take the US to unprecedented levels of government spending and taxation. We already covered the major economic... Read More

US Oil Production To Roar Back To Life This Year: BAML

Oil production Over the past 12 months, OPEC jawboning and the finally agreed production cut between the cartel’s main members has helped stabilize the price of oil at over $50 a... Read More