When the yield curve inverted earlier this year, Blackstone’s economic model predicted a recession in the next 20 months. But Byron Wien cautioned against relying on that forecast.

Wien is the vice chairman for private wealth solutions at Blackstone. He spoke to investors yesterday via webcast, along with Joe Zidle, who is Blackstone’s chief investment strategist. The slides from their presentation are available here. The two spoke in a debate-style format, with Zidle presenting arguments aligned with the conventional wisdom and Wien taking a contrarian position.

They noted that the predictive value of the yield curve is that it inverts ahead of a recession. At those inversion points, generally economic conditions have been good, as they are now, or even improving.

The following chart, from their presentation, shows the inversion points (with red arrows) approximately 20 months ahead of recessions (with grey bars): 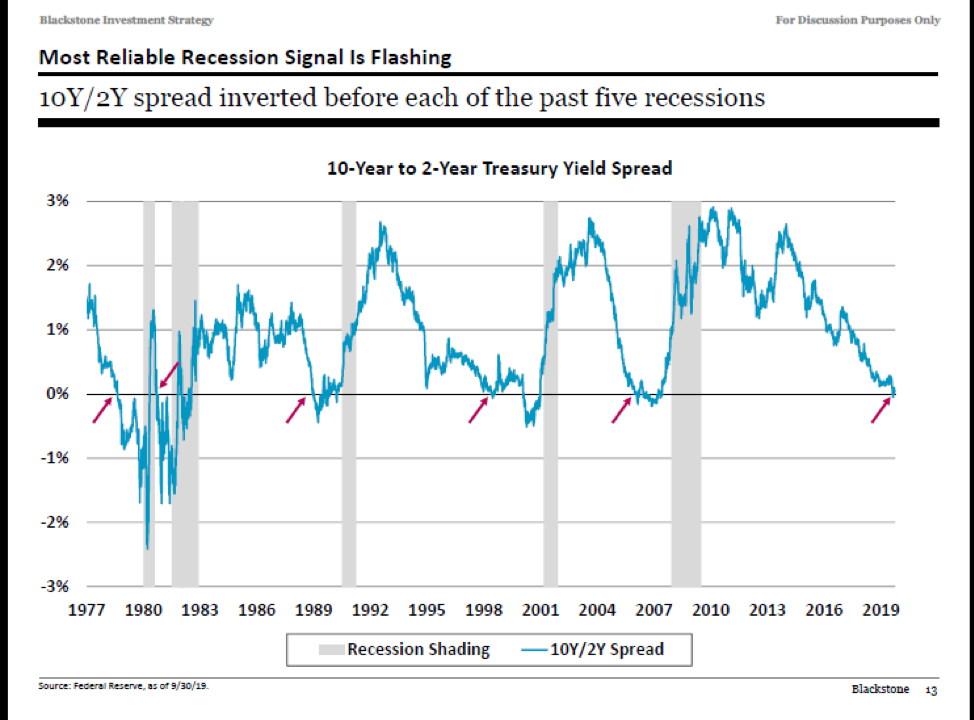 Wien said that the yield curve, using Blackstone’s preferred measure of the two-year to 10-year spread, has only “flirted” with inversion. Usually an inversion is caused by the Fed raising short-term rates. But this time it has been because long rates dropped below short rates, which Wien attributed to “too much liquidity” in the bond market.

“That argues that maybe we are not going to have a recession as soon as you think,” Wien said.

Wien and Zidle reviewed a series of what they called “primary” and “secondary” recession indicators, and compared their readings to prior to the bursting of the tech and housing bubbles. The yield curve is the most predictive, according to Zidle. But he noted that average hourly earnings, another primary indicator, typically crosses above 4%, which normally leads to the Fed hiking and a recession. It is currently at 3.5% and growing “slowly,” Zidle said.

The leading economic indicators (LEIs), the third primary indicator, are signaling that the “countdown has begun,” Zidle said. The LEIs have “rolled over,” meaning that growth has slowed. But they have not turned negative, which has been a pre-condition of all prior post-war recessions.

They discussed how the Fed and presidential politics would affect the recession outlook.

In 2007, oil prices surged and inflation moved above 4%, Wien said. “Those conditions not in place now that makes me think a recession will be later than we expect.”

Moreover, 2020 is an election year and “Trump does not want to run during a recession,” Wien said.

Without a recession the chances of Trump’s reelection are “perfect,” Wien said. “Trump will do everything in his power to make sure the economy stays at full employment and avoids a recession.”

Welcome to Blunderland, boys and girls. At the end of the fourth quarter, the S&P 500 was priced to return 1.29%/yr for the next ten years, with no adjustment... Read More

Will The VIX Be The Best US Method To Play Brexit Mean Reversion?

Saddled in between a U.S. Federal Reserve that recently indicated in Wednesday’s FOMC meeting rate hikes might be put off, leading some to point to weakness and confusion, and... Read More