While our monthly commentaries typically recap what happened last month with a snapshot on our outlook, given that the market’s current noise level is louder than a Guns ‘n’ Roses concert, this month we’re going to reverse that formula.

Our assessment of markets suggest two constructive factors continue to prop up North American equity indices: the U.S. consumer and accommodative Central Banks. In contrast, there’s a well-known laundry list of catalysts that explain why cash levels of investors is high and short interest on the NYSE has jumped >10% since late August, the fastest pace in years. Given that the S&P 500 is within 2% of its all-time high, to date, sell-side investment strategists appear to have been correct to focus on the two significant positive factors. However, as stewards of client capital and value investors focused on free cash flow to boot, job #1 for the team at Forge First is capital preservation, and given the valuation of equities and the potential downdraft that could occur, our funds continue to be conservatively positioned. 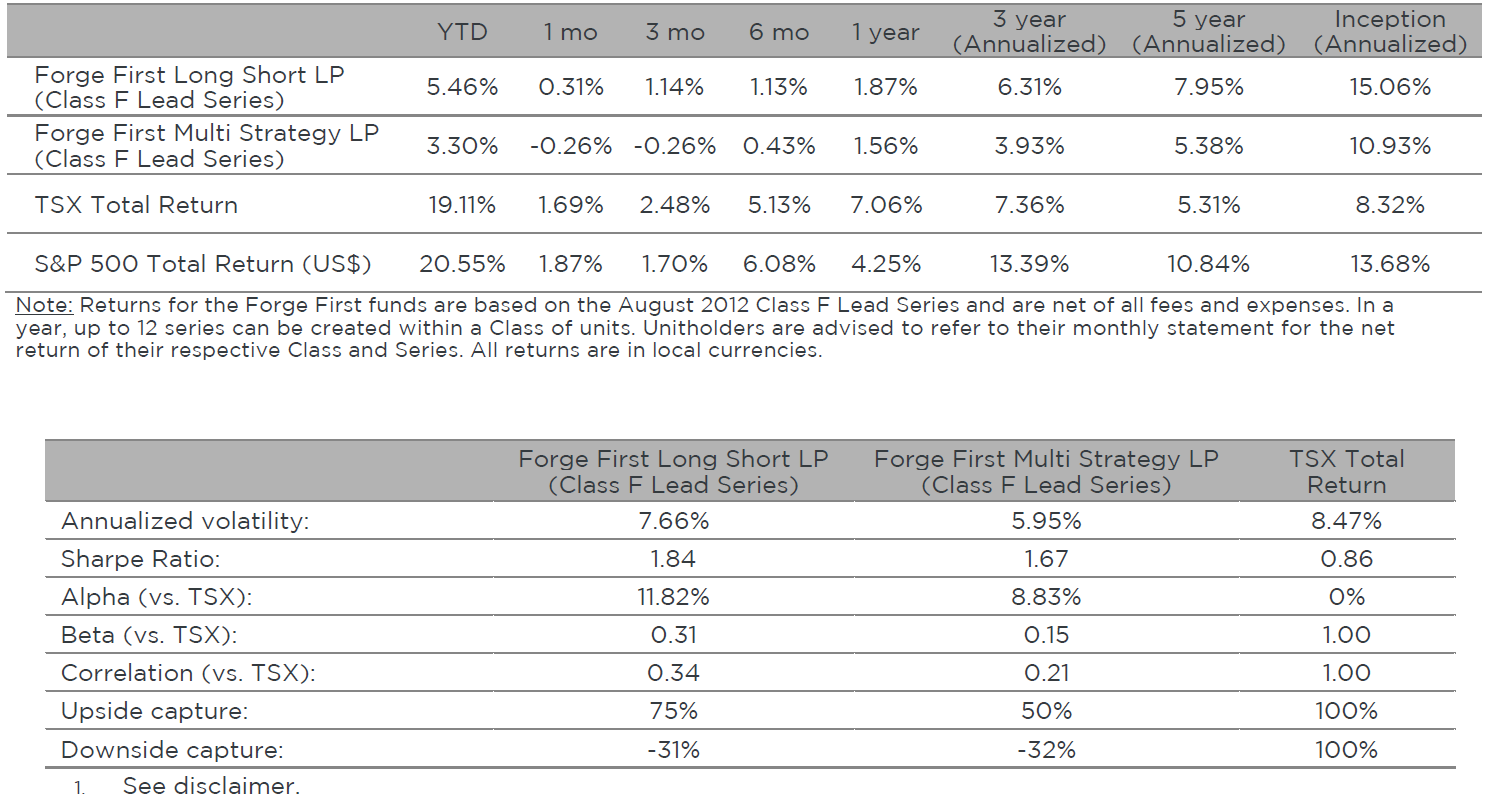 Looking at September’s performance, stocks having the biggest impact on the funds, both up and down, were energy companies. Fortuitously, we used the mid-month spike in oil prices to hedge a few of the oil sands companies that we own, buying puts when equities started trading the Monday after the attack on Saudi oil fields. Our holdings in utilities, real estate and financials also contributed to profits while our technology exposure cost the funds some money. In addition, the funds lost money on their gold stocks, however, we continue to view this sector as providing an important safety element to our portfolios.

Long Short’s net exposure entered October at +42% net long while Multi Strategy’s was +38.7%, including net common equity length of 19.4% and 19.3% allocated to other assets such as publicly traded debt, convertibles and preferred shares. Sector-wise our net exposure continues to be dominated by defensive industries including REITs, utilities and gold, in addition to equities associated with the GARP style of investing such as large cap technology and the consumer. We also continue to own Canadian oil sand producers against a short position in the shares of U.S. shale oil companies. Our funds remain positioned as such due to our cautious view towards the global economy.

The U.S. consumer represents roughly 16% of global GDP and is arguably the sole bastion of strength. As discussed in the July Commentary if Trump’s ongoing trade rhetoric catalyzes enough of a decline in U.S. consumer confidence to dampen consumer spending then as we wrote about in our 2019 outlook report last December, North America will enter a recession in 2020.

Shifting to Europe, it remains the global economy’s weakest link. With 28% of EU GDP coming from exports (versus 19% for China & 12% for the US) and disproportionate exposure to the automotive sector, the continent’s largest economy, Germany (30% of EU GDP) is arguably already in a recession. In fact, last week, a Bundesbank auction of 5-year bunds saw the highest bid to cover ratio since 2012, despite a yield of -0.77%.

Trade is also the principal reason why America’s ISM Manufacturing index (white line on the graph on above left) is in contractionary territory. Fortunately, 80% of the U.S. economy is based on services as opposed to manufacturing, with the consumer (69% of GDP) dominating the services sector. According to data from the OECD, consumer debt to disposable income sits at 109% (versus 181% here in Canada) compared to 144% in 2007 while the graph on the above right illustrates that the personal savings is a robust 8.1%. Hence the U.S. consumer has the firepower to continue to spend money, however if the decline seen last month in consumer sentiment shows further erosion in the consumer’s attitude towards the future (with the Michigan Consumer Sentiment Index (MSCI) coming out this Thursday), consumers could rein in their spending, catalyzing that much talked about recession.

Otherwise, for a couple of reasons, it’s likely that the US will enter the 12th year of its current economic expansion next spring. First, spending power emanating from the sheer size and level of wealth of the top quintile of America’s population can likely sustain additional stress among the bottom four quintiles. Also, the structure of America’s economy is much more geared towards sectors offering secular growth. Take technology as an example, where excluding Spotify and pre-internet company SAP, Europe has no tech firms that are comparable to the plethora of fast growing companies in the US.

However, unless the EU engages in material fiscal stimulus it’s tough to see how relative growth prospects versus the US can change enough so as to pressure the US dollar in the near term. In turn, this exacerbates the early signs of US dollar liquidity issues that we’ve seen of late nor does it help the outlook for corporate earnings. 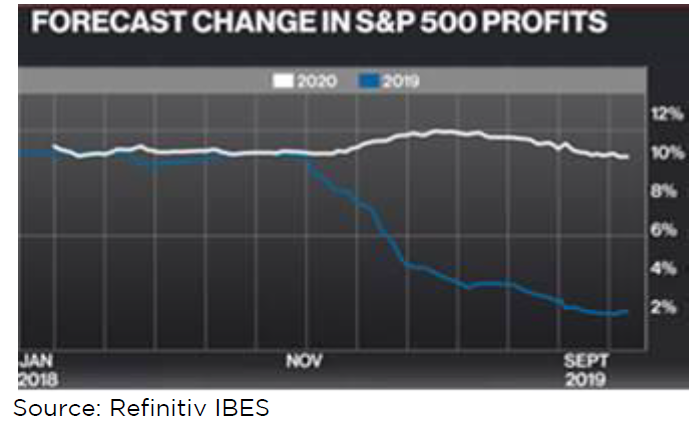 According to Refinitive IBES, 2019, and as shown in the graph above, operating profit growth for S&P 500 companies now sits at +1.9% year-over-year, yet 2020 forecasts still call for double digit growth. It goes without saying that investors will keenly assess the corporate guidance that will accompany Q3 results. Fortunately for investors, reporting season doesn’t kick off until next week, after this week’s US- China trade talks, so company management teams will know if levies on $250B of Chinese imports will rise from 25 per cent to 30 per cent on October 15th dealing a new jab to both economies.

One last item that merits consideration when assessing the outlook for markets is politics. Here at home, polls suggest a minority government is a distinct possibility, and depending upon the composition of such a minority government, the outcome could be detrimental in reversing the already diminished appetite that foreign investors have shown for buying anything other than housing in Canada.

South of the border it’s possible the near term impact of the impeachment talk may be to boost the chances that Elizabeth Warren trumps Biden to win the Democratic nomination. With primaries starting in February, if it looks like Warren, who wants to ‘reshape capitalism’, will win, US equities could face a new near term headwind.

The second tailwind for equities continues to be accommodative Central Banks. Clearly driving the liquidity and credit expansion that has provided the lifeblood to financial assets, it’s likely this largesse continues to enable the earnings yield (the white line in the graph below) to trade above the real bond yield (blue line). For now, this spread is supportive of stocks. But we note that during the past few months falling rates have had less of a positive impact on stocks than earlier in the year, perhaps because of cycle fears and the fact investors have begun to question the incremental potency of central banks. Regardless, central bankers remain supportive and one by one, including the Fed, will start growing their balance sheets again. 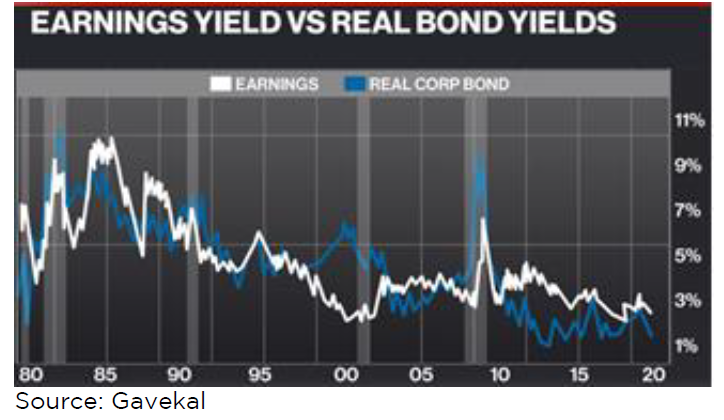 What this combined economic scenario and policy mix means for stocks is likely more of the two key themes that have dominated equities for the past couple of years, cyclicals underperforming defensives and small cap underperforming large caps. Each of these themes can be seen on the graphs below. Of course these trends were severely tested in early September when momentum and growth stocks experienced their worst drubbing since 1999 in favour of deep value names. However, this rotation appears to have been a transient event, and as stated at the start of this note, the net length in our funds is biased towards defensive equities.

In closing, there’s little question that the economic and financial cycles are in their latter stages. It’s true that if the US consumer doesn’t trigger a recession in 2020 the cycle may continue for another year or two. However, debt & demographics are gradually strangling growth to the ground. In turn, this trend implies earnings growth will also remain tepid. This fact means investors have to accept that the risk reward trade-off has begun to shift, and not for the better. Hence prudence would suggest that funds such as ours, ones that feature solid upside downside capture ratios merit strong consideration as a part of a well-structured portfolio.

As always, thank you for your consideration. Please visit our website at www.forgefirst.com for information on our funds. Should you have any questions, please contact us. 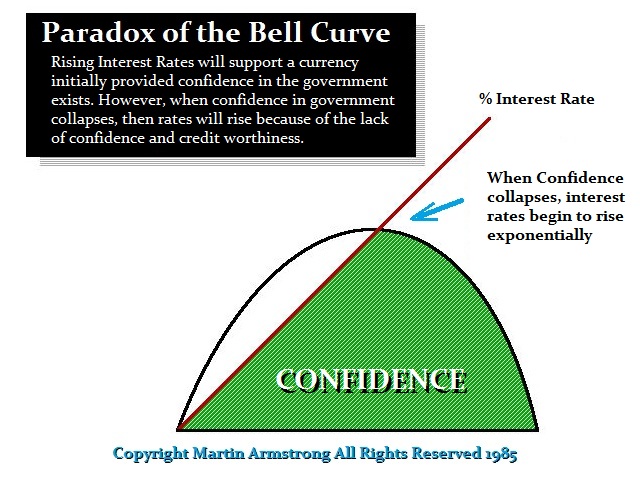 Every time there is currency volatility , central banks raise the interest rates to support the local currency and make interest rates attractive enough for foreign money to flow... Read More

A recent report from investment research firm Sterne Agee offers an overview of U.S. trade flows and major trading partners in 2013. Trade is the lifeblood of the U.S.... Read More 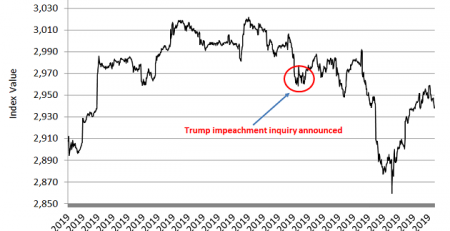 Are Offshore Drillers As Valuable As They Seem?

Leaders in the Eurozone are preparing behind the scenes for a Grexit as it moves to assist other troubled nations in the region to avoid contagion. Non public meetings... Read More

The Role Of Activist Funds: Lessons Learned From Darden

This is from a recent report put out by Shawn Kim of Morgan Stanley South Korea. We took three segments which focus on undervalued stocks based on Ben Graham... Read More