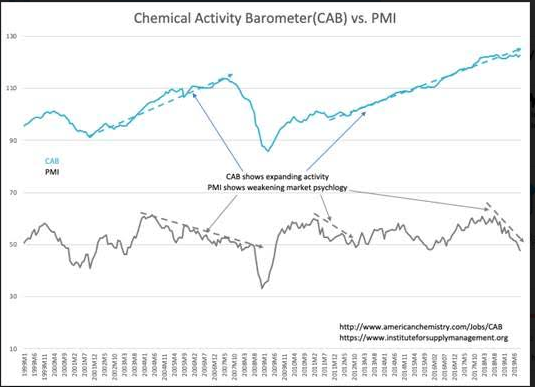 Daily details matter, especially during periods of shifting market psychology. Inversion in the T-Bill/10yr Treasury rates occurred May 2019 after a tumultuous period of rapidly falling 10yr Treasury rates beginning Nov 2018 with the onset of the Chinese attempt to take over Hong Kong and the ensuing protests. This drew recession signals from algorithms when US economic indicators continued to signal expansion. Coupled to algorithms was a stronger US$ and the PMI(Purchasing Managers Index) contributing additional misleading signals. The PMI is an opinion survey, i.e. market psychology, of Purchasing Manager expectations which has reflected negative outlooks in the past when economic indicators such as the Chemical Activity Barometer(CAB) remained positive. At some unpredictable point, economic trends become recognized and market psychology realigns. It appears we are witnessing this process at work the past few days.

This morning the T-Bill/10yr Treasury rate spread, a market psychology driven trend, turned positive by 0.07% after being negative by 0.51% the 1st week Sept 2019. Changes such as these form major market turns. While it is too early to state something definitively, hindsight of previous turns strongly suggest we are seeing a turn positive today. 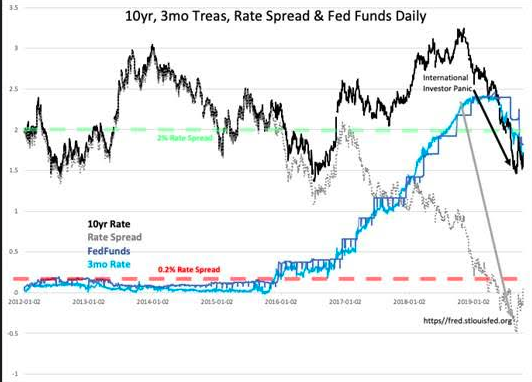 The T-Bill/10yr Treasury rate is a key market psychology indicator. A widening positive-spread is very positive for equities as it reflects capital into equities.

Economic indicators provided signals the past 2yrs that expansion continued uninterrupted. Negative market psychology fed on itself causing one non-economic signal after another to reinforce algorithmic models during this period in the face of economic strength. Economic trends always win!

In my opinion, this is what we are seeing today.

In the commercial property sector, Green REIT (OTCMKTS:GREEF) (LON:GRN) (Real Estate Investment Trust) was one of the big recovery stories of 2013 and that looks set to continue this year.... read more

Over the last few years, the political environment in both the United States and around the rest of the world has changed substantially. Political parties, specifically in western countries,... read more

Ariel Investments commentary for the month ended September 30, 2016. H/T Dataroma Equities had strong returns in the third quarter of 2016, and predictably the urge to sell U.S. stocks is... read more

A recent academic study published in the Social Science Research Network suggests that firms that have CEOs that engage in significant leisure time activities tend to underperform relative to... read more

Valeant Pharmaceuticals - The Bullish Case  via Ronald Redfield Valeant? Pharmaceutical is a company whose stock has gone from $260 to $29 and change today. We bought shares in November, during... read more

Investor activism, which has already reached new heights, is expected to grow even further, say 98 percent of U.S. investors, according to a new study. Majority of activist investors to... read more