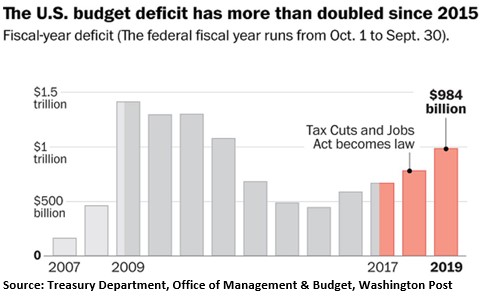 This is one of those weeks when there is seemingly a lot of news, but much of it – like the ongoing effort to impeach President Trump – is just simply “noise” that is not worthy of discussion herein. As a result, we’ll hopscotch through several topics of interest today that I think are worth talking about.

We’ll begin with the fact that the US federal budget deficit for fiscal year 2019 spiked to $984 billion, up a whopping 26% from last year, the Treasury Department reported last Friday. While this shouldn’t come as a surprise to my readers, it is nonetheless troubling.

So much for President Trump’s promise to reduce the deficits and balance the federal budget in eight years. We all knew that would not happen, but the worst part is, the Congressional Budget Office projects annual budget deficits of $1 trillion or more as far as the eye can see.

Next, we’ll take a look at the Federal Reserve which wraps up its latest policy meeting tomorrow and is widely expected to cut the Fed Funds rate by another 0.25%. This time, however, there is talk the Fed will signal that further rate cuts will be put on-hold indefinitely. I’ll discuss what that might mean for the markets and President Trump’s possible reaction.

From there, I’ll discuss the fact that another government shutdown is looming on November 21. While these funding crises usually come and go briefly without much chaos, there are some who believe President Trump might actually want an extended government shutdown just ahead. I’ll explain why as we go along.

On a personal note, I am continuing to recover from total hip replacement surgery. This week, I’m transitioning from a walker to a cane, and hopefully by next week, I’ll be walking without any assistance. My doctor and physical therapist are both very pleased with my progress. Debi has been an angel in taking care of me through my first-ever surgery/overnight hospital stay. Thanks for all your well wishes!

The Treasury Department announced last Friday that the federal government’s budget deficit soared to $984 billion in fiscal year 2019, which ended on September 30. The final tally for 2019 is $205 billion larger than in 2018, a 26% increase. As a percentage of GDP, the deficit was 4.6% – 0.8 percentage points higher than the previous year.

Deficits have nearly doubled under President Trump amidst solid economic growth and low unemployment – and despite Trump’s vow to eliminate the federal debt in eight years. The main problem – you guessed it – is that federal spending continues to rise significantly under Democrats and Republicans. The Treasury estimates that the deficit will exceed $1 trillion next year and will remain above that level for years to come.

Some of the biggest spending increases were recorded in the Medicare program, where spending rose 10% to $783 billion; the Defense Department, where spending rose 8% to $654 billion; and net interest on the national debt, which rose almost 16% to $376 billion. Tariff fees, driven by President Trump’s ongoing trade wars, also rose significantly, up 71% to $70.8 billion.

Just as a reminder, the Fed Open Market Committee (FOMC) is meeting today and tomorrow and is widely expected to cut the Fed Funds target range from 1.75%-2.00% to 1.50-1.75% for the third reduction this year. The Fed Funds futures are predicting about a 95% probability this will occur tomorrow.

However, based on the latest speeches from Fed officials, it now appears that a majority of the FOMC voting members believe that further rate cuts beyond tomorrow are unwarranted. As a result, most Fed-watchers expect the FOMC to indicate in tomorrow’s policy statement that this will be the last rate cut for some time to come, if not indefinitely. We’ll see when the policy statement comes out tomorrow at 1:00 PM EDT and with Powell’s press conference afterward.

When the Fed first cut its interest rate in July, Chairman Jerome Powell called it a “mid-cycle correction” aimed at keeping the US economy strong amid fears of a global slowdown and the ongoing US/China trade war. As you will recall, many of us who follow the Fed closely felt the rate cut was unnecessary. For the record, I feel the same way today.

If the Fed does in fact indicate a more “hawkish” stance following tomorrow, it will be interesting to see how President Trump reacts. Earlier this year, he was quite critical of the Fed and Chairman Powell specifically. Yet since the Fed cut rates starting in July, Mr. Trump has largely backed off his criticism.

So, if the Fed indeed signals tomorrow that it is shelving plans to cut rates further going forward, we’ll see how the president responds. As for the stock markets, a rate cut tomorrow should be positive, but if the Fed adopts a more hawkish view going forward, that could well be viewed negatively, especially with the major indexes at new record highs.

Another Government Shutdown Looming on November 21

I hesitate to bring this up because government funding crises come and go every year or two and they always get resolved. Yes, the government does shut down every now and then for a few days, but nothing serious seems to happen. Yawn, yawn. Blah, blah. Who cares?

Yet I would be remiss not to bring this to your attention because the government is on-track to run out of money again on November 21, and there are some who believe that President Trump might welcome an extended government shutdown so he can blame Democrats and shift the focus off of their attempts to impeach him.

I’ll keep this short, but here’s what you need to know. The Treasury Department monitors government revenues and expenditures, and it knows when Uncle Sam is likely to run out of money. The next important date is November 21. If something isn’t done to raise more revenue by then, “non-essential” government services will be shut down at least temporarily.

These temporary government shutdowns occur periodically regardless of which political party controls the White House or Congress. It’s ridiculous that they occur at all, but that’s another story for another time.

The point is, the government is on-track to run out of money again on November 21. What usually happens when this occurs is the Congress passes a so-called “Continuing Resolution” (CR) to fund the government until more permanent funding is passed. The president routinely signs these short-term funding measures.

But this time around, there is speculation that President Trump might refuse to sign a Continuing Resolution and let a partial government shutdown last for an extended period of time. His reasons, some speculate, are that he could blame the Democrats for not passing a permanent budget to fund the government and, more importantly, take the attention off of the congressional impeachment efforts. Again, this is just speculation, mainly by Democrats and the media.

Some politicos argue that President Trump is considering using a spending showdown to put the focus back on the issues he deems important, including the fact that Democrats don’t want to pay for national security, border security or restrain wasteful spending.

Likewise, they argue that the longer Democrats drag out this impeachment circus, the less likely Trump has any reason to cooperate with them on government spending. They may have a point there. Yet Democrats contend such a move would backfire on Trump because the public would see it as an attempt to help himself at a cost to the country. This could also be true.

The bottom line is that yet another government spending showdown lies ahead on November 21. It is ridiculous that Congress and the White House routinely let these deadlines loom until the last minute, and that government shutdowns should ever happen. But they do.

I don’t know if President Trump is considering an extended government shutdown after November 21 in an effort to shift attention away from congressional efforts to impeach him.

What I do know is, markets don’t like government shutdowns. Stocks finally hit new record highs last week. It wouldn’t take much to spoil this party! You read it here first.

Why Would Fed Cut Rates With Stocks at Record Highs?

The Tip, The Raid: The Takedown of al-Baghdadi 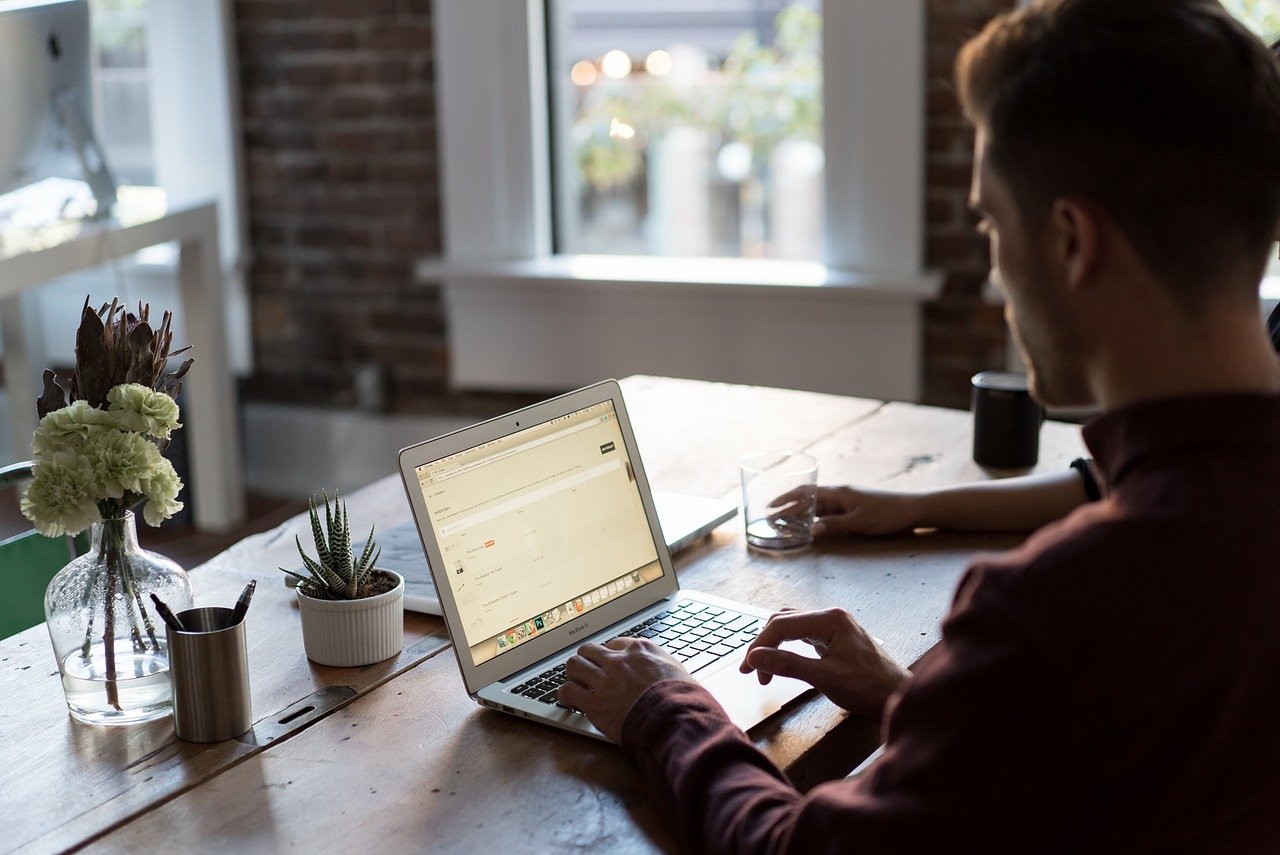 Taxing Workers for Staying Home: A Policy Rooted in Envy?

Ever since the beginning of the pandemic, working from home is the new normal. Q3 2020 hedge fund letters, conferences and more In 2018, just 5.4 percent of the US's working... read more

Dane Capital Management Fund annual letter too partners for the year ended December 31, 2015. Get The Timeless Reading eBook in PDF Get the entire 10-part series on Timeless Reading in... read more

As concerns over the Syrian political situation escalated, oil prices crept upward over the course of this week. With the United States ready for military intervention in the Muslim... read more 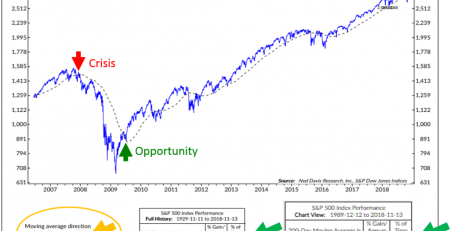