Despite US tariff wars, Chinese economic prospects remain in line with 2019 expectations and are likely to prevail in 2020, due to deleveraging and structural reforms.

A year ago, I projected that in 2019 Chinese GDP growth could achieve 6.2% in full-year growth, if policymakers can sustain higher-quality growth while suppressing debt accumulation. This scenario has proven pretty valid so far.

Recent international headlines have projected “sub-6% growth” in 2020 China, assuming weakened consumption, cautious private investment and shrinking exports. Such projections have been reported as a negative turn. In reality, Chinese growth deceleration is in line with long-term expectations. Even half a decade ago, the International Monetary Fund expected China’s annual growth to be 6.1-6.2 by 2020. The minor deviation can be attributed to US tariff wars.

Most economic projections focus on growth prospects in 2020. But let’s go beyond the short-term to see how the 2020 economic prospects are likely to support China’s more vital medium- and long-term objectives– deleveraging and structural reforms in 2020-2024 and rebalancing until 2030.

If Chinese government would ignore its commitment to poverty eradication, higher living standards and sustainability, it could achieve more rapid growth, but at the cost of people’s livelihood, living standards and environment. Policymakers cannot accept too much deceleration either. The effort to double living standards – as measured by GDP per capita, with purchasing power parity – between 2010 and 2020 requires growth at about 6.1% in 2019-2020.

Assuming peaceful international conditions and managed trade wars, Chinese growth may decelerate from the 2007 peak of 14.3% to 5.5% by 2024. 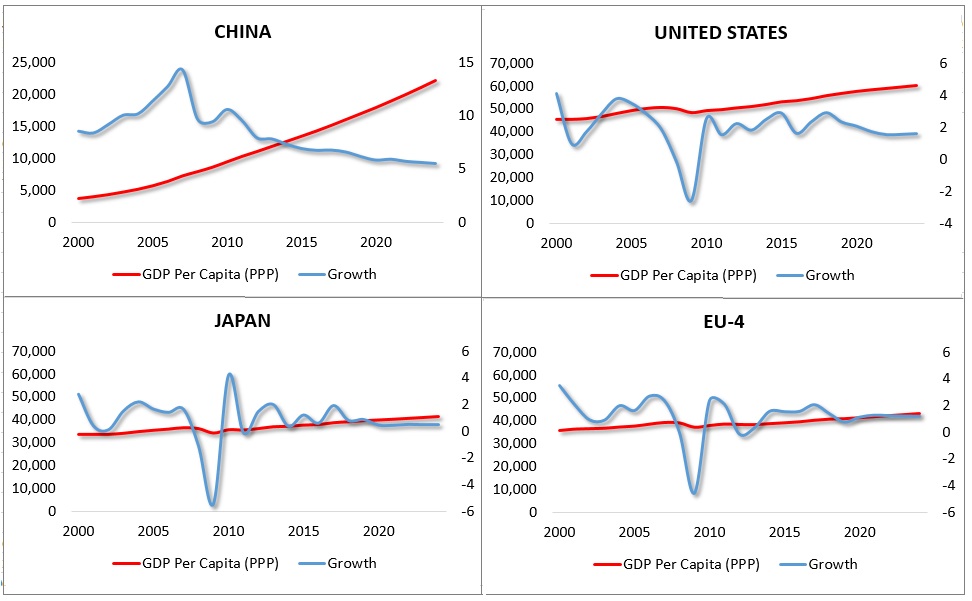 EU-4: Averaged growth and per capita incomes in Germany, UK, France and Italy

Here’s the inconvenient truth: In China, the Communist Party continues to foster the expansion of middle group consumers. In contrast, US middle classes have stagnated since the 1970s, European middle classes are shrinking and their Japanese peers seek to avoid a fall into a poverty trap.

In the Reagan era, US growth was sustained by soaring trade deficits and debt-taking. During the Trump rule, the White House has fostered growth with huge one-time tax cuts, tariff wars and drastic debt expansion. US public debt now exceeds $23 trillion (107% of the GDP). Except for Germany, the debt-to-GDP ratio is also high in the largest EU economies, such as the UK (99%), France (109%), and Italy (143%) – and far worse in Japan (264%).

These major economies in the advanced West have all benefited from ultra-low interest rates, while engaging in rounds of quantitative easing. Second, none of them are engaging in substantial structural reforms. Third, due to their unsustainable growth, maturing economies, aging populations and declining growth potential, they all are on a path to secular stagnation.

In China, the central government has used fiscal support and monetary easing to defuse the collateral damage associated with U.S. protectionism. So public debt has increased (64% of GDP). But unlike all major Western economies, China continues to deleverage. Indeed, financial deleveraging and reduced interconnectedness between banks and non-banks have contained the rise of financial risks, although vulnerabilities remain. And China is also engaging in broad structural reforms, even amid the US tariff wars. And unlike Western economies, China still has significant long-term growth potential.

Since the Chinese growth continues to shift away from investment and net exports toward consumption and innovation, the corrosive impact of protectionism will be reduced over time. In turn, rebalancing continues, as evidenced by record retail sales records during the October Golden Week, China International Import Expo (CIIE) and Alibaba’s Single’s Day.

Investors have made note. China may prove the world’s best-performing major stock market in 2019, with the benchmark CSI 300 index up by a third this year. By November, bourses in Shanghai and Shenzhen had added $1.4 trillion in market capitalization, raising the total onshore equities to $6.8 trillion this year. Meanwhile, almost half of fixed income institutional investors outside China plan to increase their exposure to China-issued debt in the coming year, according to FinanceAsia.

Despite periods of optimism, trade talk between Washington and Beijing remain inconclusive. While negotiations on the “Phase 1 trade deal” focus on agriculture, additional core disputes remain unsolved, including disagreements on intellectual property and technology, and financial market accessibility.

The US tariff wars are likely to hinge on three probable scenarios. In the Managed Trade War scenario, the two sides agree on Phase 1 deal and a realistic long-term negotiation trajectory on broader core disputes. The scenario would boost global economic prospects, by fostering investor and consumer confidence worldwide.

In the Technology War scenario, the two sides would agree on some sort of a Phase 1 deal, but not on a long-term negotiation trajectory. A brief trade truce would be only a prelude for a longer-term trade war in which the White House would evoke “national security reasons” to exploit anti-competitive instruments to undermine Chinese 5G success and Huawei’s expansion. This scenario would result in downgraded outlooks in all major economies

In the third Hybrid War scenario, a Phase 1 deal would be undermined, while long-term negotiation trajectory would not be achieved. Tariffs and protectionism would to foreign investment and the global value chains of multinational corporations. In this scenario, global consequences would prove the worst as the US would resort to economic, political, military and covert means to contain China’s economic rise and China would have to respond.

Guided by US trade policy mistakes – the worst in the postwar era- the global economy is now amid a “synchronized slowdown,” as the IMF has warned. But there is much worse ahead without the Managed Trade War scenario.

Dr. Dan Steinbock is an internationally recognized strategist of the multipolar world and the founder of Difference Group. He has served at India, China and America Institute (US), Shanghai Institutes for International Studies (China) and the EU Center (Singapore). For more, see https://www.differencegroup.net/

The original commentary was released by China Daily on November 20, 2019. 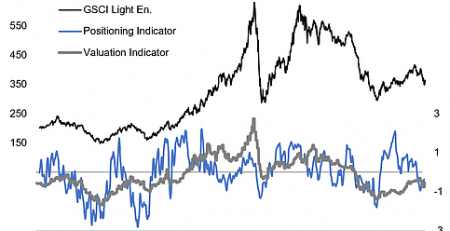 Commodities: Cheap And Out Of Favor

This is the penultimate in a 10-part blog series where I will go through each of the charts from the 10 Charts to Watch in 2019. The purpose is... Read More