Data costs are huge, and there’s nothing anybody can do about it… – ValueWalk Premium 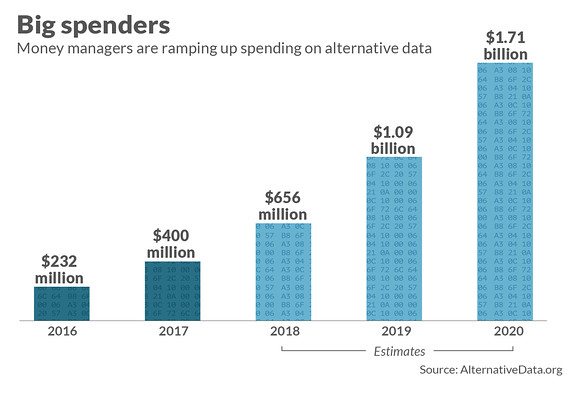 We’ve talked at length about the move to algorithmic trading, the quant revolution and the billions of dollars that investors have been pouring into the space. But all isn’t rainbows and lollipops in the quant world these days. While the growth and general spend on quants is still growing, the data costs associated with these guys are crippling their profits, as outlined in a recent efinancial careers post:

This jives with mumblings and grumblings locally in Chicago where startup hedge funds are increasingly feeling the pinch of multiple layers of data costs being applied. They not only have to deal with increased IT spending, hiring of quants, cloud services, and all the rest – but the thing that makes their engines go – the market data itself – is becoming more and more expensive each passing year. Here’s the Globe and Mail on the phenomenon:

The Investment Industry Association of Canada estimates that fees for market data have increased on average about 11% a year during the past 13 years. (While it is difficult to obtain precise figures on historic trends in fees charged for equity transactional data because of frequent bundling and re-bundling of data packages, this estimate is based on stock-exchange revenue earned from data fees, compared with revenues from listing and execution.) This increase in data fees is astounding by any measure, especially in view of the modest underlying annual inflation of less than 2 per cent and technology applications that should lower the cost of data packaging and distribution. The reality is that higher revenue from market data has compensated for weaker trade execution revenue at stock exchanges, contributing to continued earnings gains and share price increases.

…The phenomenon of relentlessly rising market data charges is similar in European capital markets and the United States. Copenhagen Economics, an independent consulting firm in Europe, has produced recent analysis indicating that fees for stock and ETF-transaction prices have been on a similar upward trajectory as Canada. The Securities Industry and Financial Markets Association has undertaken recent independent analysis of market data fees and concluded that data fees paid to stock exchanges in 2018 were at least 10 times higher than the same fees charged in 2010.

Costs rising 11%/year are enough to make anyone look twice. And it may only be getting started, as firms move increasingly into strategies and models which require alternative data (the classic example here is satellite feeds of Target parking lots or Corn fields). The theory is – everyone on the market has access to the same or similar financial data (even if it is becoming more and more expensive); so, having an alternative data stream sets you apart. But this Does. Not. Come. Cheap.

Total spending on alternative data by buy-side firms — mutual funds, hedge funds, pension funds, private-equity firms and the like who buy securities or other assets for their own or their clients’ accounts — will jump from $232 million in 2016 to a projected $1.1 billion in 2019 and $1.7 billion next year, according to AlternativeData.org, an industry trade group supported by data provider YipitData. The group reckons there are now 447 alternative-data providers.

So is the pain worth the gain, or alternatively, is the price you’re paying actually paying off? Apparently, the users of that data think so:

The Greenwich Associates study said 72% of investment firms reported that alternative data enhanced their signal, with over a fifth of respondents saying they got over 20% of their alpha — industry lingo for the ability to beat the market — from alternative data.

And how do you think a startup hedge fund telling investors that their models work on delayed data (because it’s ahem..ahem…free) would go over. Not so well, we think. And so the game goes on and on, with the CME and ICE and all the rest being able to charge for their data, because – what else are you going to do. Scale and liquidity are what makes a futures market go… take those away and there is not futures market. Have those in place and you can pretty much charge whatever you want for that data.

The Who's Who of the investment industry has gathered in the Sheraton Hotel, New York, today. The first Robin Hood Investors Conference kicked off in the morning and will... Read More

Cliff Asness's latest on why factor timing is not all it's cracked up to be and why some forecasts of doom for factors and "smart beta" (yeah, he's finally... Read More

FPA Capital Fund commentary for the second quarter ended June 30, 2015. Introduction After three quarters of underperformance, we are pleased we were able to stem the negative comparisons and outperform... Read More