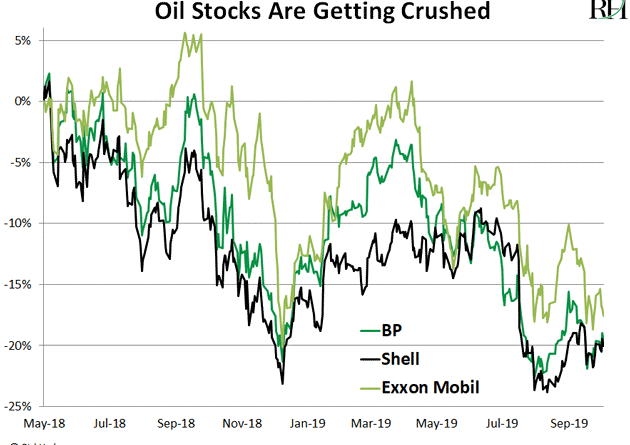 What’s the greatest company in history?

You could make a strong case for shopping disruptor Amazon (AMZN). Its stock has handed early investors 100,000% gains and counting.

Some will point to phone disruptor Apple (AAPL). It invented the iPhone—the most successful product in history—and was the world’s first trillion-dollar company.

Oil giant ExxonMobil (XOM) has to be in the mix too. While its stock has “only” handed investors 15X their money, Exxon has dominated in energy for half a century.

This Table Charts the World's Largest Companies by Decade Since 1980

Keep in mind, this is a lineup of the best of the best. It’s a “who’s who” of business juggernauts. Yet of all these powerful companies, only Exxon managed to stay in the top 10 from 1980–2017.

In fact, although the table doesn’t go back this far, Exxon claimed a top-10 spot every decade all the way back to 1950! 57 years is a long time to stay on top…

But not even mighty Exxon can outrun disruption.

In fact, many formerly powerful “Big Oil” stocks are trading like they’re going out of business. Exxon, BP (BP), and Shell (RDS.A) have all plunged around 20% in the past year, as you can see here: 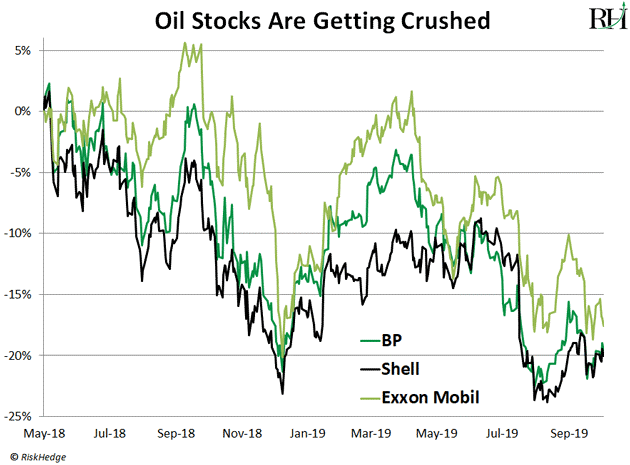 Energy Investors Have Had a Horrible Few Years

The Energy ETF (XLE) has sunk to levels last seen during the financial crisis. But one corner of the energy market is red hot.

Solar stocks have shot up 60% over the past year, as you can see from the performance of the solar ETF TAN: 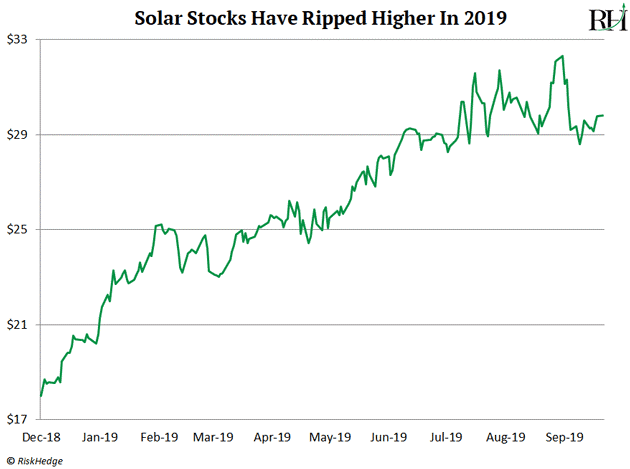 It’s been a wild ride for solar stocks. Do you remember the Super Bowl-level hype around solar a couple of years ago?

Promoters claimed solar panels would soon power the whole country. Soon the sun would put the big oil giants out of business. That may well turn out to be true, but the claim was about 10 years too early.

In 2008, investors got carried away and plowed billions into clean energy stocks. The largest solar stock First Solar (FSLR) shot up 1,000% in less than two years. But solar wasn’t ready for prime time.

In 2009 it cost $360 to produce a megawatt hour of electricity using solar. Compare that to less than $70 for natural gas. The sky-high cost of solar power meant it was not going to power America any time soon.

When the market sobered up to this reality, the Solar ETF cratered a disastrous 96%!

Does the Name Solyndra Sound Familiar?

As you may remember, Solyndra was a solar panel maker that claimed to produce the world’s most powerful panels. It convinced the US government of this. And in 2009 it got a $535 million check from the Obama White House.

But as competition heated up, Solyndra’s panels were no match for innovative technologies. The company went bust less than two years after getting a half a billion dollars of taxpayer money.

Solyndra perfectly summed up solar’s “false start.” Investors mocked it as an environmentalist fantasy that relied on government handouts. For years, solar stocks were where money went to die.

But Since Then, Solar Technology Has Quietly Improved Leaps and Bounds

In fact, since 2009 the cost to produce electricity using solar has plunged 90%. And get this… the rapid cost declines mean solar is now cheaper than old sources of power like coal and oil.

This is a BIG deal.

For years solar was the laughingstock of the energy world. Now it can keep the lights on for cheaper than virtually any other energy source.

It costs roughly $40–$50 to produce one megawatt hour of electricity from solar today. It costs 100 bucks from a coal plant. And the cheapest alternative—natural gas—can produce a megawatt for around $55.

Solar power is no longer some pipedream. It’s truly one of the cheapest sources of electricity in America today!

I talked about genomic testing a while back. In short, it took scientists 13 years and $3 billion to complete the first ever DNA map of a human. Even as recently as 2011, Steve Jobs, co-founder of Apple, forked over $100,000 to get his DNA mapped.

Today you can get your DNA mapped in one day, for a thousand bucks! The rapid drop in costs is helping genomic testing live up to its disruptive potential.

For example, Illumina (ILMN) is the world leader in DNA mapping machines. On the back of record demand for its machines, Illumina’s stock has handed investors 10X gains since 2012!

You can see the same trend happening with solar. America now gets 3X more power from clean energy sources than it did in 2008. And many iconic companies are cutting out old, traditional sources of power altogether.

Today clean energy lights up roughly one in every eight American homes. Analysis from Bloomberg suggests this could grow to 50% by 2050.

You’ll likely see power companies replace coal plants with solar farms. At half the price of coal, solar pays for itself in time.

Will the Boom Continue for Solar Stocks?

If you want to put some money to work in the sector, SolarEdge (SEDG) is a solid bet. SolarEdge makes the “brains” of solar panels called inverters. In short, inverters convert sunlight into the electricity that is fed into your home.

The company is selling solar equipment in record amounts. Revenues shot up 43% to an all-time high of $325 million this past quarter. The stock has shot up 130% this year.

If you’re going to invest in solar stocks—I must warn you. These stocks are extremely volatile and often rise and fall 20% in less than a week. So, keep your position size small enough that a 20% swing won’t ruin your sleep.

The Great Disruptors: 3 Breakthrough Stocks Set to Double Your Money

After more than six years of rising stock prices and sky-high bond valuations, investors braced themselves for a tumble in 2015. Instead, they got a seesaw year in which... Read More

Confessions of a Value Investor: Lessons in Behavioral Finance

Confessions of a Value Investor: A Few Lessons in Behavioral Finance by Sanjay Bakshi March 17, 2010 Vicarious experience Most learning comes from extremes. Instead of focusing on becoming too smart, i urge... Read More