Uber May Do the Impossible in 2020 – ValueWalk Premium 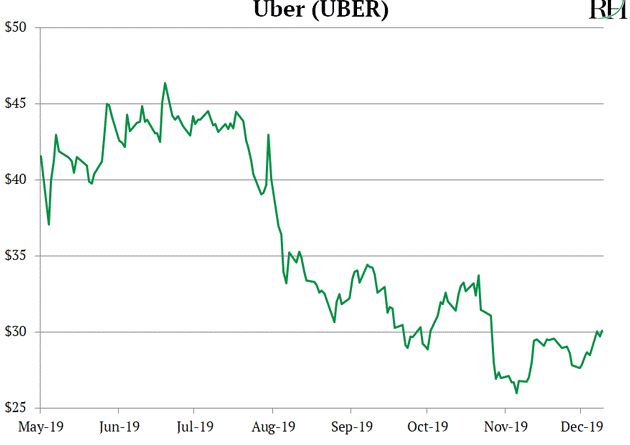 Of all the stocks I covered this year, I was hardest on Uber (UBER). I caught some flak for writing “buying Uber stock is the dumbest thing you can do with your money in 2019.”

Although my call ruffled feathers, I stand by it. Since Uber IPO’d in May, the stock has plunged 35%. And it was just plain wrong how the media hyped up its IPO, luring in novice investors who didn’t know any better, only to watch their money go up in smoke.

To be clear, I love Uber’s service. It’s cheap, easy, and way better than regular taxis. But it’s been a horrible, money-losing business.

The fares it charges aren’t nearly enough to cover its expenses. In the first six months of this year, it blew through over $6 billion!

In May, I said “Uber will never make money.” I now expect Uber to turn a profit for the first time ever next year. And I believe its stock has bottomed and will stage a big rally in 2020.

What changed my mind? Remember, Uber essentially invented the formerly red-hot sector of ridesharing. Although Uber was a true disruptor (here I explain why it’s the best breed of fast-growing stocks), it had a big problem: its service is pretty easy to copy.

This Was a Total Nightmare for Uber

In an attempt to steal Uber’s customers, its rivals cut prices to the bone. For example, in the six months leading up to its IPO, Lyft (LYFT) handed out discount coupons for a third of all rides! And Doordash was deliberately losing money on every order to lure away Uber’s customers.

In short, Uber was under assault. At least a dozen competitors were losing piles of money, on purpose, in order to steal business from it.

Uber was forced to slash its prices, which cost it dearly. As I mentioned, it blew through $6 billion in just the first six months of 2019—more than it lost over the previous seven years combined!

Unbeknownst to Many, a “Visionary” Investor Was Fuelling This Price War

Have you heard of Masa Son? He’s Japan’s richest person, and CEO of the world’s largest venture capital firm, Softbank Group (SFTBY). Softbank stands for Software-bank and is famous for handing out generous checks to early-stage disruptors.

But back then, nobody had heard of it. It was a private company with a dozen or so employees. That $20 million investment is worth over $100 billion today! Masa banked a mind-blowing 5000X payoff.

In 2017, Softbank made headlines again when it plowed $9 billion into Uber. But Masa didn’t just invest in Uber. He handed out billion-dollar checks like candy to many of its rivals, enabling them to undercut each other in a “race to the bottom.”

But Softbank Has Finally Sobered Up

As you may know, Softbank screwed up big time when it invested billions into coworking company WeWork. Once a phenomenon, WeWork became a laughingstock.

In October, it was forced to disclose the staggering sums of money it was losing. Its value collapsed, and Softbank took a huge $5 billion loss.

New York’s #3 ride-hailing service—Juno—went bust in November. Food delivery company Postmates has shut offices and laid off hundreds of staff. “Asia’s Uber” Grab shelved its IPO. And in an effort to slash costs, Just Eat and Grub Hub are looking to merge.

Meanwhile, Uber has only one real rival left in America: LYFT (LYFT). For the first time ever, Lyft started raising prices across the board last month.

For years, Uber Was in an Impossible Position

A dozen rivals with seemingly bottomless pockets were trying to run it into the ground. But those days are over. In short, Uber is now free to hike prices and focus on turning a profit.

In fact, Uber’s adjusted EBITDA margins have crept up from 8% to 22% in the past few months. And the amount of money Uber collects on each trip jumped to its highest level in over two years.

Uber expects to be profitable by 2021. I think management is “lowballing” its forecast, and it will make money in late 2020.

Here’s the bottom line. Uber’s stock was a total disaster in 2019, as you can see here: 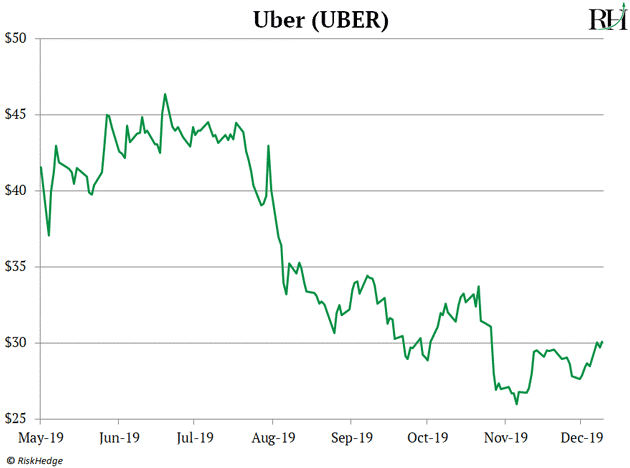 But now its business is improving rapidly, and its stock is on sale. Uber’s stock could easily climb 50% over the next 12 months as profits start to come in.

Celtic Plc: A Look at Valuation and Growth Potential

Joel Greenblatt in an interview with Morningstar says that value investing works like clockwork, but your clock has to be really slow, says the Columbia professor and CIO of... Read More

Walmart And Amazon Shoppers Already Big Fans Of Uber And Lyft According to research from 1010data, 12.4% of US WMT shoppers use Uber or Lyft. With over half of Walmart revenue... Read More

Italian Banks Come Under A Firestorm Of Shortsellers

About a week ago, IMF released its evaluation of Italian banks in which they said that the sector carried enough weight to navigate through the financial crisis. The banks... Read More

There could be trouble ahead for Ireland’s TV3 television station as Northern Irish media company UTV recently announced plans to open its own station in the Republic of Ireland... Read More