They were just expelled from China. Domestically, it is no better; President Donald J. Trump is suing them for libel, while most Americans doubt their credibility.

I will now lay out how their business is going down the tubes.

Let me introduce you to the failing New York Times. March 2020 will go down as a rough month for them.

The New York Times’ core business, its subscriptions and advertising revenues, were recently reported as down 2% in the fourth quarter of 2019. That may not seem like a big deal, but this is significant because the New York Times has been growing for years on the back of a burgeoning digital business. And, yes, digital subscription gains did again offset losses in print subscriptions.

But ad revenues overall were down 11% in the fourth quarter, an acceleration in recent poor performance. Indeed, it would have been hard for the company to achieve the levels of ad spend it saw in late 2018, when far left super PACs and other secretive organizations essentially bought a number of congressional seats with money the likes of George Soros, Google and Mike Bloomberg. In one demonstrative case, disgraced former congressperson Katie Hill, who resigned when pictures of her threesomes leaked, outspent Republican incumbent Steve Knight $8.3 million to $2.6 million, respectively. That is three times as much (no pun intended).

Trouble with Advertising and Slowdown in Digital

It was never a big player in digital ad sending like Google, Facebook or Amazon. But the New York Times saw a huge decline in full-year 2019 digital display ad revenues (-6%), where others saw healthy increases.

More digital subscriptions did offset digital display ad revenue declines at the New York Times, but overall digital revenue growth is slowing, which does not paint a rosy picture for the company’s future.

In the first quarter of 2020, digital ad revenues will collapse. New York Times CEO Mark Thompson stated earlier this month that he expected digital ad spend to be down 10% for this period.

Investors have grown risk averse since around Valentine’s Day, February 2020, when the stock took a sharp dive as the coronavirus issue emerged. The stock’s price is off about 19% from its high.

Even with this fluctuation, the stock price still looks like it is on an uptrend since 2017. Will its fortunes change? The PE ratio, an important measure of how investors see a stock, seems very inflated at 39x earnings as of yesterday’s market close. (A typical tech company only has a PE ratio of 23x, I estimate.)

The tight labor market has increased wages, increasing production costs. Production costs went from 37.4% of sales in 2018 to 39.0% in 2019. This put a lot of pressure on EBITDA, a measure of earnings from operations.

News websites like DNAInfo and Gothamist unionized in 2017 in an improving labor market and were consequently soon shut down by the owner. At the New York Times, a similar all-out war between its far-left and/or socialist indoctrinated millennial workers and its boomer elite class is not an unlikely possibility; the NewsGuild of New York, a major news union, is already a major influence on Times journalists and could grow more radical, especially if times get tough (no pun intended).

Furthermore, New York Times management has been quiet on two issues that have been roiling left-wing society elsewhere: the over-representation of white males on their board of directors and the silence around sexual harassment at the company.

Any “MeToo” sex scandals at the New York Times have yet to be highly publicized. Any search on Google will conveniently get buried by articles of the New York Times accusing others. However, based on its employee profile and harassment rates at similar companies, I estimate that 4-5 male sexual predators have operated at the New York Times over the past 20 years. And since the company has not had a public upheaval like others, those men are likely still in positions of power and influence.

The New York Times maintains a strong grip on its employees through iron-clad non-disclosure agreements, the type Mike Bloomberg was recently lampooned for during the recent Democratic debates. But will accusers gain courage and come forward this year? Condé Nast, owner of the New Yorker, last month said it will stop making employees sign NDAs after harassment-related incidents. At the time of writing, the New York Times has no plans to stop using NDAs to keep harassment accusers quiet and did not respond for comment.

Two-thirds of the board of directors is comprised of white males. I personally don’t see color, but that ratio is more than twice their percentage of the general population for those that are keeping track (leftists). Obviously, that underlines the currently limited ability of the rank and file of the newspaper to mobilize and affect progressive change within their own organization.

An improving job market means fewer qualified people available to work in industries like the news media and more with mental health issues; the New York Times welcomed someone who repeatedly made comments disparaging white Americans on Twitter to its editorial board in 2018.

After misleading reports on Covington Catholic High School student Nicholas Sandmann, the New York Times and other outlets are being sued, with CNN already settling out of court. It seems that the New York Times has since deleted the misleading articles. If more citizens sue the New York Times for “fake news” or libel like President Donald J. Trump recently has undertaken to, the media company could have to offer hundreds of millions of dollars or more in restitution or hush money.

The poor quality of reporting may be related to why confidence in the news media has been degrading. A 2017 Gallup study showed that more “Americans have a negative (43%) than a positive (33%) view of the news media, while 23% are neutral. 66% of Americans said most news media do not do a good job of separating fact from opinion.” In 1984, only 42% held the latter view view.

Young people are particularly distrustful of traditional media owned by Baby Boomers like the New York Times owned by Arthur Ochs Sulzberger Jr. They may well flock to new, more decentralized news sources. They’re more likely to use apps instead or gets news from Instagram.

Insider Trading:: Halfway through the growing season a grain trader receives a private report on the state of the corp. Should he use the information to speculate in grain futures?... read more

Speaking at the Invest for Kids conference in Chicago, Mason Hawkins, founder of Southeastern Asset Management, a concentrated long term value investors with $35 billion under management in a... read more

The fallout from the historic move in the Swiss Franc on January 15 is continuing to be felt, with hedge funds, pension funds and other institutions revealing staggering losses,... read more

Richard Koo of Nomura is out with a new report on the US economy, Europe and on Japan again (of coursE). Below as some excerpts from the latest note. The... read more 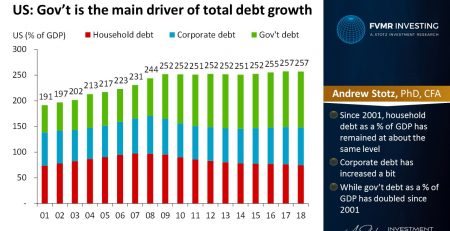 Government Debt Has Driven Total Debt Growth In The US

Since 2001, US household debt as a % of GDP has remained at about the same level Corporate debt has increased a bit While gov’t debt as a... read more