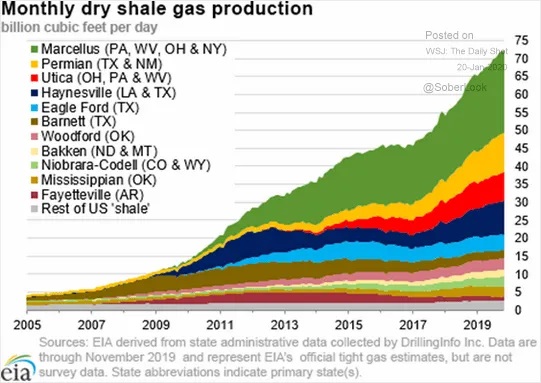 Before I start, it’s worth putting things into perspective here. In the fall of 2018, I made a call on natural gas (mostly based on the same thesis expounded below) and got it spectacularly wrong. In fact, I lost enough money that I can now teach a doctorate level course in how to lose money in natural gas. Along the way, I learned a whole lot of lessons—namely that when it comes to a despised commodity after a decade-long bear market, normal valuation metrics like PV-10 or PDP or even net asset value no longer offer a floor to valuation support. As I once again make the bullish case for natural gas, it’s worth remembering my track record on the topic; Caveat Emptor.

Let’s start with the basics; natural gas is a commodity that the US is unusually rich in. Most oil wells contain some percentage of gas. As the US energy industry migrated towards shale, this percentage increased dramatically. Roughly speaking, 40% of the total gas produced in the US is produced as a byproduct of liquid-rich shale wells. These wells do not care about the price of gas as they’re primarily focused on liquids production. As a result, gas production has soared over the past few years, even at a price point where most dry gas producers are losing money. While some of the growth in gas production has indeed come from the gas guys, a good chunk of it has come from the shale oil guys as a result of byproduct gas. As COVID-19 quarantines hit oil demand and lead to an epic glut, (remember all those tankers I’m long?) oil prices are finally starting to force some discipline on the shale patch. What happens to natural gas when all the shale oil guys stop drilling and a bunch of their wells shut in? That’s the question I keep asking myself.

No one knows the answer to this question. Today, natural gas supply and demand are roughly balanced. You can refer to your favorite energy analyst, but they tend to be slow to update their models at inflections (as usual). Turning to the sharper guys who are ahead of the curve, my buddy Chase Taylor, from Pinecone Macro Research https://www.pineconemacro.com/, just published a great report full of charts (highly recommend subscribing to the emerald letter). In it, he gives you a framework for how to think about the coming gas deficit. Since no one’s crystal ball is all that accurate at an inflection, I think that estimates of a 5 to 20 BCF gas deficit by year-end are about as accurate as you’re going to get—particularly as weather is the wild card in gas demand. Yes, on the high end, you could have a pretty insane deficit number for an industry that has suffered through a decade-long glut. Even on the low end, you’re going to draw down stocks at a time when demand keeps growing. The important part is that you don’t have to get it all precisely right to realize that it’s certainly bullish for gas producers.

So why didn’t this same thesis work last year? It’s not like shale oil producers were making money at $50 oil either. The difference is the magnitude of the losses. At $50, they could use accounting games to pretend that they were profitable. How many bank executives know how to analyze shale basin decline curves? At $25 oil, everyone knows these shale guys lose money. Revolvers are getting cut and debt maturities are looming. A whole lot of bonds will not get rolled and guys don’t usually keep drilling while in bankruptcy—instead they usually go into run-off. Let’s face it, oil men go to work dreaming about how much shareholder capital they can destroy, but this time is different—even if they have capital for drilling wells, there’s nowhere to put the oil. They will be forced to shut in production eventually. If the capital markets won’t solve the glut, the storage situation certainly will.

Now, I will be the first to recognize how awful the natural gas business is. These companies have spent a decade destroying capital. Many of them have 2020 and even 2021 hedges that mean they do not immediately benefit from the recovery. Many of them have substantial oil and NGL production that may hold back profitability. Many of them have stretched balance sheets and near-term debt maturities. Some are parties to parasitic downstream MLP deals that are designed to enrich management. Look, I get it. I’m not investing in Berkshire Hathaway (BRK – USA) here and have taken a basket approach while sizing the position accordingly. You don’t get to buy great businesses when you go rummaging through the trash heaps of finance. However, I find that the most money in investing comes from when a situation goes from hopelessly fucked to sort of shitty. A lot of these stocks are down more than 95% from where they traded three years ago. The move from down 95% to down 75% is a 5-bagger.

Please, don’t ask me for my basket. If I wanted to share all the names, I would have done that. I have set up my basket in a specific way where attributes of one company somewhat offset the weaknesses of others. I tried to diversify by basin as well. What I will say is that I own a whole lot of Sandridge (SD – USA) as I’m something of a bag-holder there, but I bought enough in the past few weeks that a moderate recovery in the price will get me back to break-even.

In keeping with my prior commitment to myself, I waited until the trend was in my favor and not simply theoretical. I made sure that gas prices had begun inching up. More importantly, I waited until the stocks themselves broke their downtrends. As I have discussed in the past, the stock market is no longer able to think forward very well and valuations stopped mattering. Therefore, if you’re going to invest, you might as well wait for the inflection, rather than front-running it.

In summary, this may not work. I admit that my track record in natural gas is comically bad, but I don’t see how the oil market can stabilize without a lot of US liquid supply coming offline—which means that byproduct gas also comes offline. Meanwhile, despite everything happening with COVID-19, US demand for natural gas has stayed constant or even grown a bit over the past few months. I suspect that gas prices are going higher (the winter strip is already starting to price this in) and as usual, the equity names have lagged the obvious. If ever there was a time to make back my prior natural gas losses, this is it.

Disclosure: Funds that I control are long  SD and a basket of other natural gas producers

An AI Approach To Fed Watching written by Jeffrey N. Saret and Subhadeep Mitra of  Two Sigma  and reflects their views, not necessarily the firm's  - please see important... Read More

A few weeks ago we did a story detailing the many gold ETFs and miners that famous hedge funds have been holding and losing in. The article mentioned the... Read More

John Burbank on Sources of the Biggest Mispricings

John Burbank on sources of the biggest mispricings Read More

The good news for income seekers is that the Donald Trump election will push up the US 10-year Treasury yield to 2.5% for the first quarter of 2017. The... Read More

Greenhaven Road Capital letter to partners for the first quarter ended March 31, 2015. Dear Limited Partners, We are very fortunate to have had a strong start for the year. In... Read More