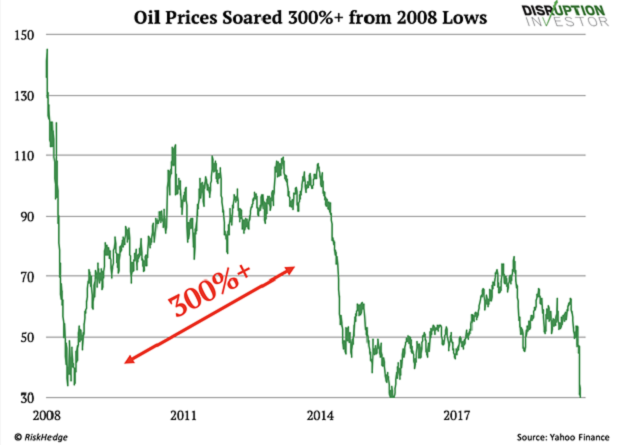 I’m writing this essay because millions of investors are in danger without realizing it.

As you probably know, oil has recently taken an historic nosedive. On April 20, its price crashed from $18 a barrel to -$38, turning negative for the first time on record.

The news has set off an oil buying frenzy among Americans hoping to profit on a rebound.

In a matter of days, United States Oil Fund (USO), America’s most popular oil ETF, has exploded in popularity, as you can see below: 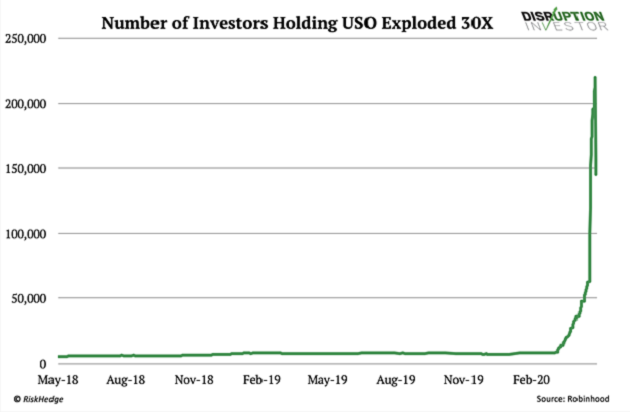 But most of these investors have made a terrible investment. There’s one simple reason that all but ensures funds like USO will never fully recover from today’s lows.

Even worse, it could get cut in half again! As I'll show you, it has to do with a legal requirement stipulated in the fund’s operating docs.

Yes, Oil Prices Will Eventually Rebound, and That's the Problem

As you know, COVID-19 has brought the world to a halt.

Ships aren’t sailing. Trucks and cars are parked. Planes are grounded. Most machines that use oil are sitting around unused in lockdowns sweeping the world.

But while oil taps are turned down to a trickle, oil producers keep pumping out a massive surplus of oil. So big, in fact, they are running out of space to store it.

It doesn’t take a genius to understand this can’t go on forever. As soon as the world goes back to “normal,” oil prices will perk up.

That’s what all those folks who own USO are banking on. Unfortunately, that’s not how it works.

Oil Funds Don’t Work the Way You May Think

Yes, oil funds like USO are designed to “track” the oil price. But it’s not as straightforward as it may sound.

Contrary to what most investors think, USO doesn't buy and store oil in massive tanks, which would be enormously expensive. Instead, it trades so-called “paper oil,” also known as oil futures.

Oil futures are contracts that give you the right to buy physical oil at a predetermined price on a specific date in the future. (One contract represents 1,000 barrels of oil.)

You can trade them on the stock exchange like any other stock. The catch is: When these contracts expire, you have to pick up thousands of barrels of actual oil from the seller.

USO avoids taking delivery of physical oil by holding the futures contract until two weeks before its expiration. Then it sells it and buys another short-term contract in its place. For example, in the middle of March, it sells its April contract and buys a May contract.

This is not a secret. Page 18 of the fund’s “prospectus” warns investors that it will “roll” the contracts this way.

In normal times, this allows the fund to move in close lockstep with the oil price without having to own physical barrels of oil. But it all falls apart when it runs into a situation called “contango.”

The Dreaded “Contango” That Wreaks Havoc on Oil Funds

Take a look at the current prices of oil futures contracts until December 2020:

The December price is higher than July’s because the seller thinks oil demand will pick up by December, driving prices higher.

When commodity prices trend higher into the future like this, it’s called “contango.” This doesn’t happen often, but when it does, it wreaks havoc on funds built on futures like USO.

In the USO case, the fund has to swap most of its expiring futures with the nearest-month contracts. And since a future contract costs more than the one USO is holding, it in effect is forced to buy high and sell low.

For example, when oil was selling for -$38, the fund was essentially paying $22 a barrel. This way, they lose money on each trade.

Worse, now that the fund has attracted hundreds of thousands of new investors, it has to dump even more money into money-losing “contango” contracts. Every single month.

Here’s proof of how “contango” wrecks oil funds like USO.

In 2008, oil bottomed out at $34. Then it recovered to $107 in the next four years, creating the very same “contango” situation we are in today: 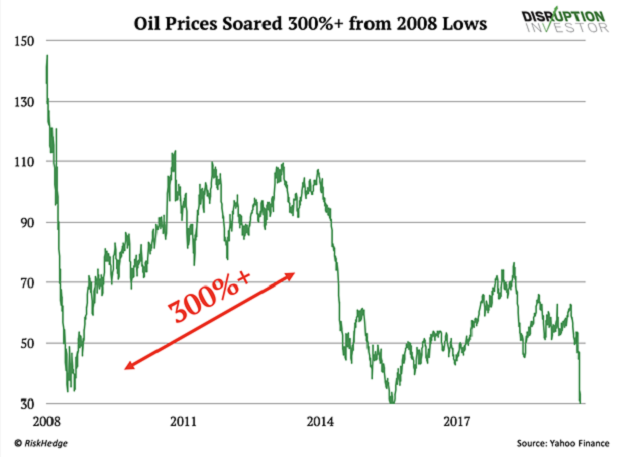 Meanwhile, USO went sideways and never recovered, as you can see below: 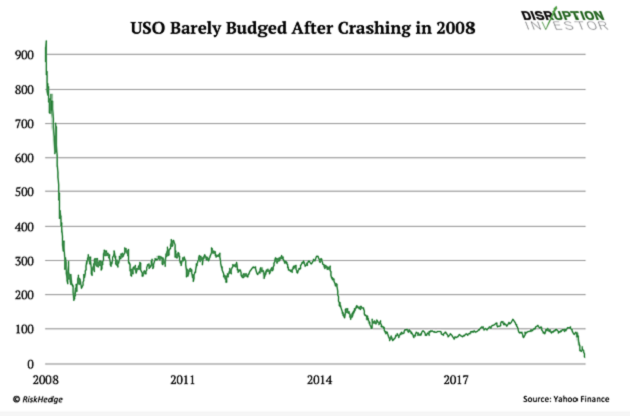 There’s no reason to think this won’t happen this time around as oil prices pick up again. And I’m not the only one thinking this way.

Last week, USO made a rare move called a “reverse split” that signals the fund is preparing for the worst. In short, it consolidated all its shares into fewer proportionally valued shares.

For example, before April 28, USO had 1.5 billion shares in circulation at $2.2. Today there are one eighth as many shares at 8X the price.

There’s no actual benefit in pulling this off except for one thing. Their management is afraid the fund’s shares would plunge below $1. And stock exchanges often delist stocks that trade below $1 to prevent price manipulation.

Let it sink in. The stock price was over $2 before the reverse split. That means USO insiders are worried the fund could plunge another 50% from today’s lows!

Meanwhile, investors are clutching at this ticking time bomb as if it's a surefire way to profit from rebounding oil prices. Don’t be one of them.

Written with the assistance of Dainius Runkevicius

Watch Sotheby’s stock price, says an Evercore ISI research report today.  Once the price of the high end auctioneer reaches the tip of its price channel, which is projected... Read More

As Wall Street looks to the four-year anniversary of the Lehman Brothers collapse, it also has another one to acknowledge: Occupy Wall Street's first anniversary. Given the nature of the... Read More

This Academic Can Help You Make Better Investment Decisions - Piotroski F-Score by Quant Investing A few years ago I stumbled onto what is most likely the best indicator you... Read More