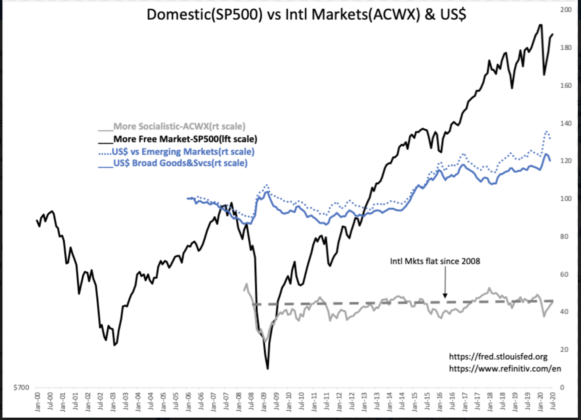 The St Louis Fed has issued revised US$ indices the past 12mos taking into account services as well as goods with the inception 2006. A separate US$ Goods/Services Index relative to Emerging Markets differs from the more inclusive Broad Goods& Services Index and supports the theme presented earlier based on Western style portfolio manager reliance on Modern Portfolio Theory. There is anecdotal evidence supported by falling Sovereign Debt rates to 5,000yr lows(negative in some instances) and record low yields in utility common shares and REIT yields that there has been substantial capital flows back to Western markets as Western investors developed and built-out Emerging Market opportunities in the process of seeking higher investment returns. In short as Westerners invested in Emerging Markets a substantial quantity of that capital boomeranged back seeking greater safety in Western protections to property values. Emerging Market investors took advantage of global markets and escaped autocratic wealth confiscation and the loss of purchasing power by sending their newly liquid capital West.

Modern Portfolio Theory has dictated, since inception in 1952, that Western portfolio managers incorporate all suitable markets in proportion to their market presence. There is no consideration that many foreign markets do not abide to US accounting, legal or securities regulations. The earliest signs that equity capital deployed into Emerging Markets was finding its way back to Western markets as investments in Sovereign Debt and real estate(directly and via REITs) can be traced to the late 1990s in Sovereign Debt rates. The pattern became more obvious with the development of global market indices. Foreign market indices, long a practice of institutional advisors, gradually built enough of a platform to create the All Capital World Index without US Markets(ACWX) June 2008. The general pattern in global investing has been strength in the US$ whenever investors seek safety in periods of global financial stress or when US markets offer perceived higher returns. The correlations in earlier now discontinued US$ indices show two periods in particular, the early 1980s and Internet Bubble stock market of the late 1990s. The US$ rose 50%+ and 40%+ respectively. (Chart is available on request)

Since the early 1970s, the pattern of US investment in Emerging Markets had resulted in the gradual strengthening of Emerging Market currencies and incorporation into US$ indices as trade relationships rose to levels to justify inclusion. This resulted in a gradual weakening of the index as newer currencies were added. This decline was not a true sign of weakness in the US$, but widening global trade with emerging manufacturing centers outside the US for the most part driven by US companies. As recent as 2yrs ago, it was reasonable to expect the long history of this US trade pattern to continue. It is now apparent that this pattern has changed with current policy initiatives seeking tariff parity with trading partners coupled with the wider emergence of autocratic governments. The pattern present since 2006 in the newer Trade Weighted US$ Goods&Services Indices show the US$ strengthening.

The US$ has become ~20% stronger vs global currencies and ~30% stronger vs. Emerging Market currencies. The SP500 vs ACWX & US$(current Trade Weighted US$ Broad Goods&Services Index) lays out the investment theme for investors. The SP500 has outperformed the ACWX since inception in 2008. The conditions behind the underperformance of the ACWX have only intensified as the US seeks to regain tariff parity and places sanctions on countries fostering global terrorism. The recent COVID-19 scare resulted in a 2dy rise of nearly ~10% repeating the past that globally the US is viewed as a safe haven during periods of financial stress.

US tariff and domestic policies(tax and regulation reductions) are likely to keep the US as the global investor safe haven. One can expect to see the US$ remain elevated at current levels for the next 5yrs in my judgement as global conditions do not appear to justify shifting capital into other markets. Change in foreign markets such as Hong Kong and Europe is likely to keep these venues less favorable relative to the US especially when one brings in currency exchange rates.

The better long term return returns remain solely in US markets in my opinion. The recommendation is to identify the better corporate managers and to buy the shares of corporations where corporate insider buying is most active.

Harvard Business School Professor Max Bazerman discuses how important it is to not just to be able to focus, but to be a good noticer as well. Bazerman is... read more

How is the price of gold established? In the futures or ETF market? And what role does high-frequency trading play a role in gold price discovery? Such are the... read more

This is part two of five part series covering a rare interview Stan Druckenmiller gave to Barron’s, published on March 28 1988 in the Barron’s National Business and Financial... read more

Talk about patching things up. Walgreen Company (NYSE:WAG) today hit the headlines after news of its reunion with long time customer Express Scripts Holdings Co. streamed in. The two have... read more

Iraq produced 3.2 million barrels per day (mmbpd) in June 2013, according to the recent OPEC report. As Iraq has not been allotted any fixed quota in OPEC production,... read more

Switzerland has emerged first in the global competitive index for the year 2012 to 2013. This marks Switzerland’s fourth consecutive year on top of the leader board. This came... read more