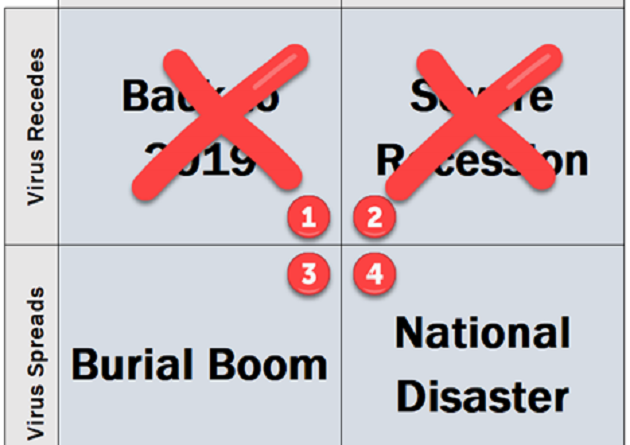 Will America Accept the Worst?

Even in normal times, the news describes murders, accidents, wars, natural disasters, and the passing of once-famous celebrities.

Those deaths are usually just headlines. We don’t know the people, and we don’t expect to share their fate anytime soon. We note them and move on.

Ignoring the death news isn’t so easy in a pandemic that could sicken and possibly kill any of us, at any time. Yet people manage to do it. Some think it’s all exaggerated or fake. But even those who see the threat often tune out the news. They’d rather not think about it—and understandably so.

The virus doesn’t care what people think. It will, if given opportunity, try to infect them. A small percentage of those infected will die. Will others care?

Sadly, I think many won’t. Millions of us have been ignoring needless death for years.

When the COVID-19 case count turned higher in mid-June, President Trump and others said not to worry. It was the result of more testing, and deaths were still falling.

Neither of those proved right. New cases rose faster than testing, and people take a few weeks to die. And sure enough, the daily death totals turned higher in early July.

Now, the percentage of patients who die is indeed falling as doctors learn how to treat the condition. But with many more cases now, we are still going to see a lot more death this summer. Then we get to fall and flu season, which could be even worse.

Two months ago in The Great Reopening Gamble, I described the four possible scenarios we face, based on the answer to two questions.

I said back then we would know more in a few weeks, and we do. Instead of receding, the virus is spreading faster. That eliminates two of the four scenarios. Here’s where we are now. 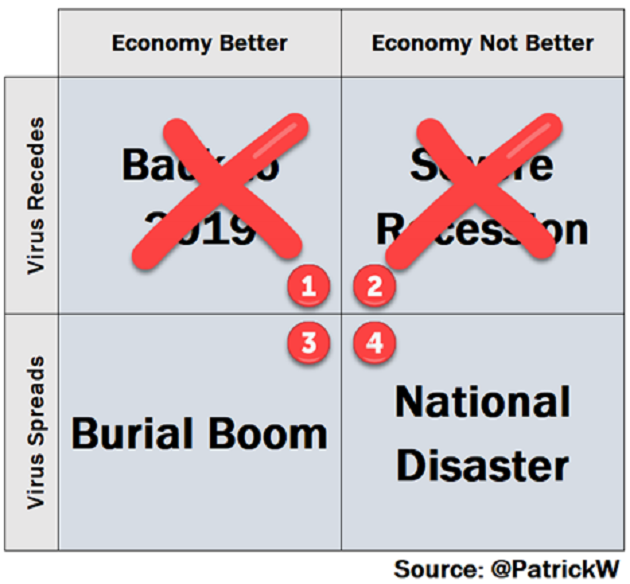 Scientists are working on vaccines and better treatments, so maybe things will get better. But any such breakthroughs are probably months away, and maybe longer.

What does that mean economically? It depends on how people react.

So far, most governors don’t seem likely to reimpose the kind of stay-at-home orders we saw last spring. So some folks will go about their business (hopefully wearing masks), making the economic damage relatively less severe.

But their behavior could also intensify the problem. Even a few carriers can spread the virus enough to offset any economic boost they create.

Somewhere in there is a tipping point, and the deciding factor is how much death will Americans accept?

Almost from the start, some have framed this crisis as a polar struggle between protecting public health vs. protecting the economy.

I think that’s a false choice. The economy can’t thrive until we control the virus. But surely no one wants to lose both those battles, harming our health and our economy at the same time.

Don’t be so sure.

Here is a chart I shared last September, comparing US healthcare costs with other countries. These are 2018 numbers but probably still close. 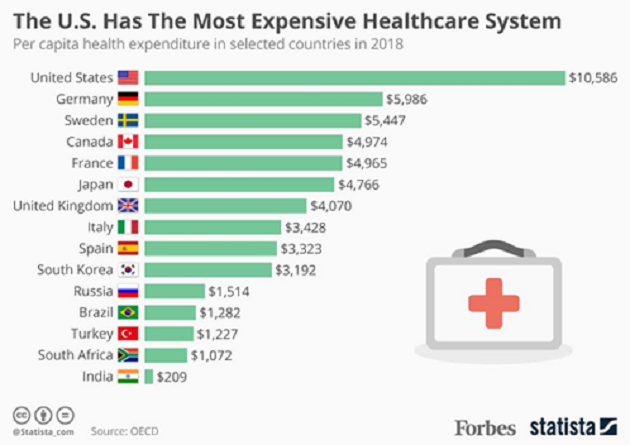 You can see we spend far more per person on healthcare than other countries. It’s not even close.

Even before the pandemic, this money wasn’t making us any healthier. Here are the top 10 countries ranked by life expectancy, according to the latest United Nations data. 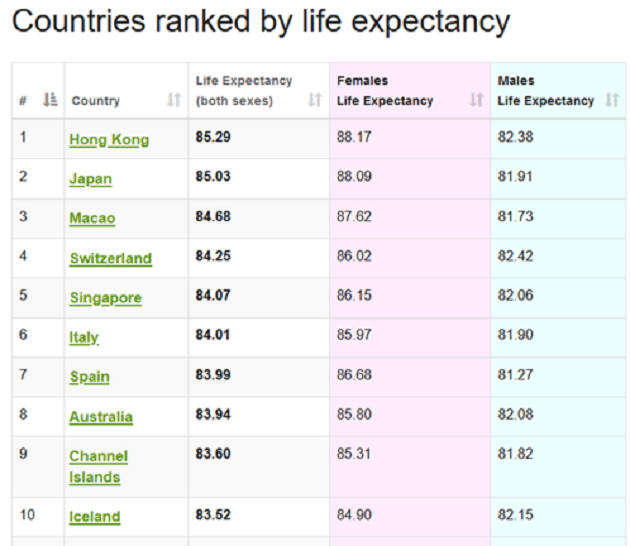 You don’t see the US because it is way down the list at #46. On average, our lives are shorter than people in advanced economies like Japan, Switzerland, and Australia. We are also behind less-advanced countries like Cyprus, Maldives, and Lebanon.

The average American lives almost five years less than the average Italian even though we spend three times as much on healthcare, per capita. Multiply those five years by 330 million Americans, and we’re losing a lot more life-years than other countries, and it’s not even saving us any money.

In other words, the US was letting people die prematurely, and hurting our economy in the process, long before COVID-19 came along.

That’s a choice, not an accident. The solutions are well known. We could save those lives if we wanted to. We don’t because many Americans have other priorities.

So if the pandemic death toll worsens, as seems likely, I would not assume that the public will do what is necessary to stop it. Some will, yes, but not all.

That means we will continue diverting economic resources to unproductive uses and our economy will have a hard time recovering, much less growing.

Meanwhile, other countries (like China) that have handled the virus better will move ahead without us.

That is why I said The Corona Depression Is Here. I hope to be wrong. But I don’t think I am.

Beginning April 1, FPA, a leading value investing practitioner, will offer all of its FPA Funds as no-load funds. Now these will be available for direct purchase by the... Read More

Amazon has no competition as far as the eye can see, says Bill Miller, LMM chairman, sharing his case for the e-commerce retailer. H/T Dataroma Amazon As A Value Play: Bill... Read More

Small Cap Earnings estimates have been going down, but why? PIX1861 / Pixabay You either love or hate small caps. Small caps can offer better returns than their large cap peers,... Read More

The Supply & Demand Economics Behind The Current Venture Capital Boom And Crunch Overnight it seems the venture industry has ground to a standstill. The ‘unicorn’ term now means overly... Read More