The Fallacy of CAPE as a Market Predictor – ValueWalk Premium

Analysts have many ways to estimate expected market returns. The challenge is to identify those few that provide usable information for making investment decisions. In this article, I discuss one of the common mistakes made in this type of analysis and why the cyclically adjusted PE (CAPE), developed by Robert Shiller, is not nearly as reliable a predictor of market returns as most claim it to be.

One of the best known of these measures is the CAPE. It is widely accepted as an indicator of market under- and over-valuation, no doubt due to its fundamental intuitive appeal. As an example of its wide acceptance, many market commentators are warning that the market is overvalued at the current CAPE of roughly 30 and thus are forecasting low returns.

For any such measure to be useful for making investment decisions, we first need to determine if it has been a reliable predictor of future market returns. As an example of this type of testing, a recent Advisor Perspectives (AP) article examined CAPE’s ability to predict 10-year stock market returns and found that its accuracy was “remarkable.” This anointed CAPE as an excellent candidate for making portfolio decisions.

Unfortunately, the author made the mistake of regressing 10-year overlapping returns on monthly values of CAPE to reach this conclusion. The misuse of overlapping returns is such a common and critical error that it is worth looking more closely at why it is mistakenly used so often, along with the problems it creates. Later in this article I will discuss how you can correctly use CAPE in making decisions.

The benefit mirage of overlapping observations

Since daily, monthly, and even yearly market returns are noisy, it is a challenge to uncover statistically and economically significant relationships that can help in decision making. This is particularly the case when trying to forecast long-term returns, as did the AP article. he short time period from 1995 through 2000 that was the focus of the article, there were only two non-overlapping 10-year periods, insufficient for a statistically significant test. A widely used solution to this problem is to calculate overlapping (or rolling) 10-year returns, which increases the number of observations from two to 180 in the sample. At first blush, this is a huge increase in statistical power.

But the improvement is a mirage.

The problem is that no new information has been added, since adjacent 10-year returns have 119 out of 120 monthly returns in common. This means that there are still only two completely independent, 10-year observations. The result is that statistical power, as captured by the number of independent observations, has not improved. The overlapping bias, which makes results look much stronger than they are, is well known and extensively documented (for example, see this paper). Unfortunately, it is a mistake still frequently made by practitioners and academics. Even Robert Shiller, the father of CAPE, fell prey to this error!

Returning to the AP article, overlapping 10-year returns were calculated using monthly market returns from 1995 through 2020, resulting in a CAPE return graph much like the one below (my calculations). 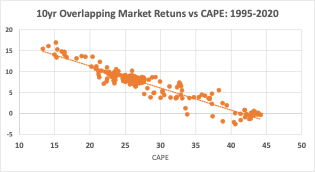 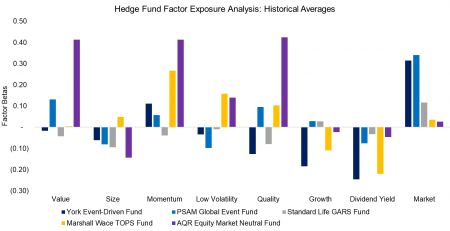 After a quarter of slightly negative performance, down just under one percent for the quarter ended September 30, the Loeb Arbitrage Fund sees a fundamental shift in merger activity. ... read more

Investors, analysts and financial journalists use different measures of value to make their investment cases and it is not a surprise that these different value measures sometimes lead to... read more

This is part two of a three-part interview with Richard Fogler, Managing Director, Chief Investment Officer and PM of Kingwest & Company. The interview is part of ValueWalk’s Value Fund... read more