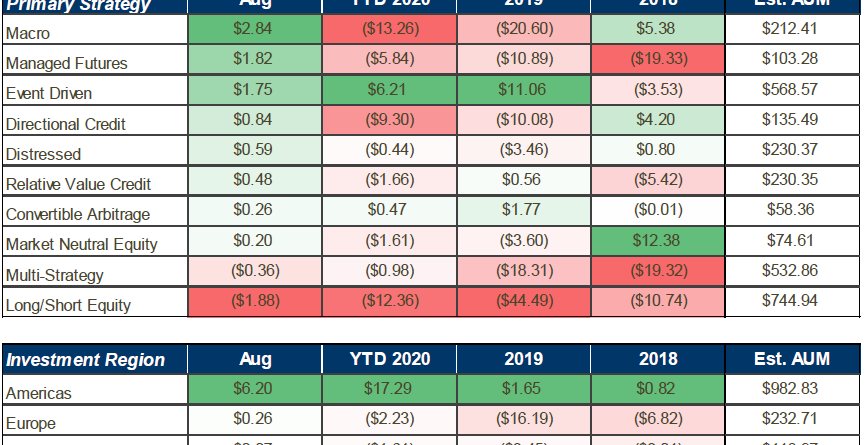 August was generally a broadly positive month for the hedge fund industry, though there were pockets of large redemptions clouding the picture for strategies which otherwise would appear to be showing positive investor sentiment.

Frankly, we did not expect to be writing a sentence like this four months ago. The industry had started the year ok, but then some large losses from influential funds appeared in February, COVID-19 became a terrible reality, and investors reacted quickly to withdraw assets. At that point, the memory of recent earlier negative investor sentiment was overwhelming, but the last two months have been generally positive. The breadth of allocations was what was most impressive in August, despite the volume of asset movement being well below recent months. The future, however, appears as rocky as any time in recent memory. How investors react will be driven by how managers perform, and the breadth of the opportunity set they are presented. At the very least, it is safe to say the latter will be large. 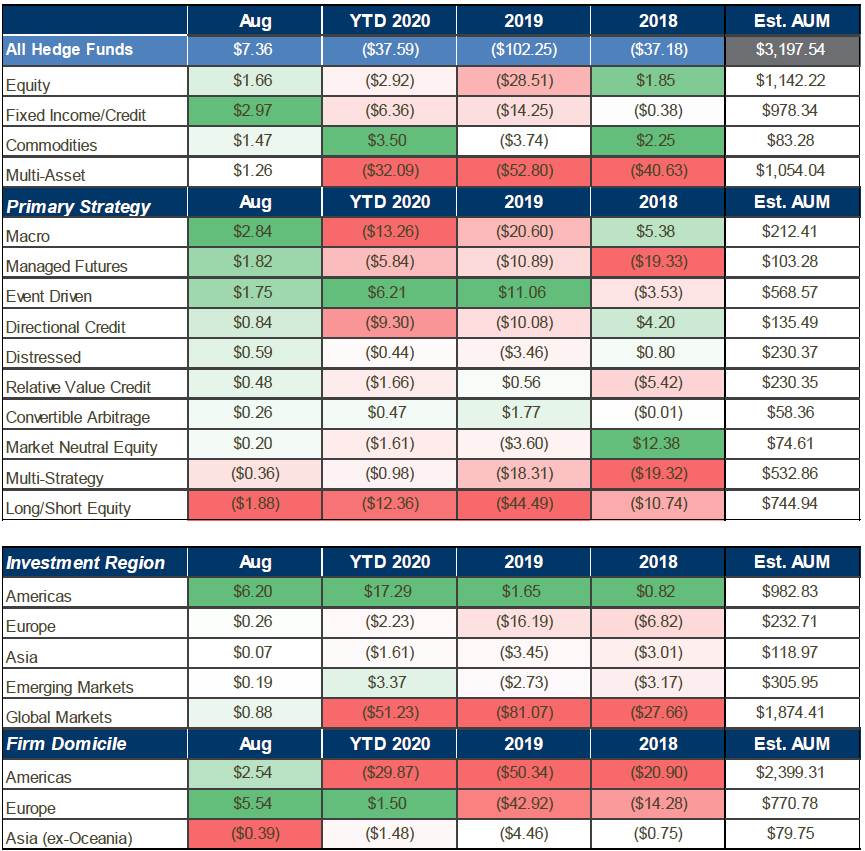 There were fewer funds seeing large inflows and outflows in August (though there were a couple notable standouts), but the proportion of funds with inflows was near 60%, which if it holds as more data is reported, would put August 2020 as the second most broadly positive month in the last five years. The overall rate of asset movement was low, so what appears to have happened was that while many products received new assets in August, the amounts just were generally not large at all. Light flow, positive attributes.

The net of flows for macro strategies was positive in August for the second consecutive month and third in the last four. YTD flows to macro is still meaningfully negative due to Feb-to-Apr outflows, but in August there were a few large allocations and large redemptions. The largest redemptions came from funds which have mostly underperformed, with the five largest outflows from being from funds which have each underperformed the average of their peers in 2020 and together have an average return worse than – 4%. Removing the worst performer of this small group still produces an average return worse than -1%. On the inflow side, it was mostly outperformers being rewarded, with an exception. It is worth noting, some recent underperformers gaining assets performed quite well in the second half of 2016, around the last US presidential election.

Just about 60% of products in this universe appeared to receive net inflows in August, which is the third month in a row with positive flows. Similar to macro funds, flows for the year are still negative due to earlier elevated redemptions, but for a growing group in this space 2020 is likely feeling pretty good, so far. Those who have benefited the most performed generally very well last year, though for many of these funds the last three months have been a bit more difficult with both June and August producing some noticeable losses. Given what appears to be a rocky road ahead in terms of uncertainty around the US election process and the ongoing pandemic, it will be interesting to see if investors continue their recent allocation trends or pull back in response to recent losses.

Outflows were highly concentrated in August and the majority of products appeared to have inflows during the month. If we remove the two largest allocations and redemptions, the flow for the group would have been firmly positive in August.

There have been consistent overall redemptions from within this category over the last six months, however we’ve shifted from the majority of products seeing outflows earlier in the year, to the majority receiving inflows, but overall redemptions continue. It is clear this is being driven by performance issues. Just looking at August, the primary drivers of redemptions have returned an average of -16.5% in 2020, while the primary drivers of inflows have returned +14.7% through August. The question is of course whether this theme will continue. While some of the underperformers have more recently appeared to right the ship, the very largest influencers on flow have not. The consequences for individual products within the category will likely be very different than the picture the aggregate produces. Similar to the multi-strategy segment, the overall flow picture may not fully represent the group.

In the last two months, aggregate flow for EM hedge funds have been generally unremarkable, but what is worth pointing out is that in the traditional long-only space, investors have been heavily redeeming from across both equity and fixed income, active and passive global emerging markets strategies. An exception among traditional EM exposure has been Chinese equities, which have broadly seen inflows at least through Q2. For EM hedge funds in 2020, the largest interest has been for either EM macro/multi-strategy funds or China-focused equities. 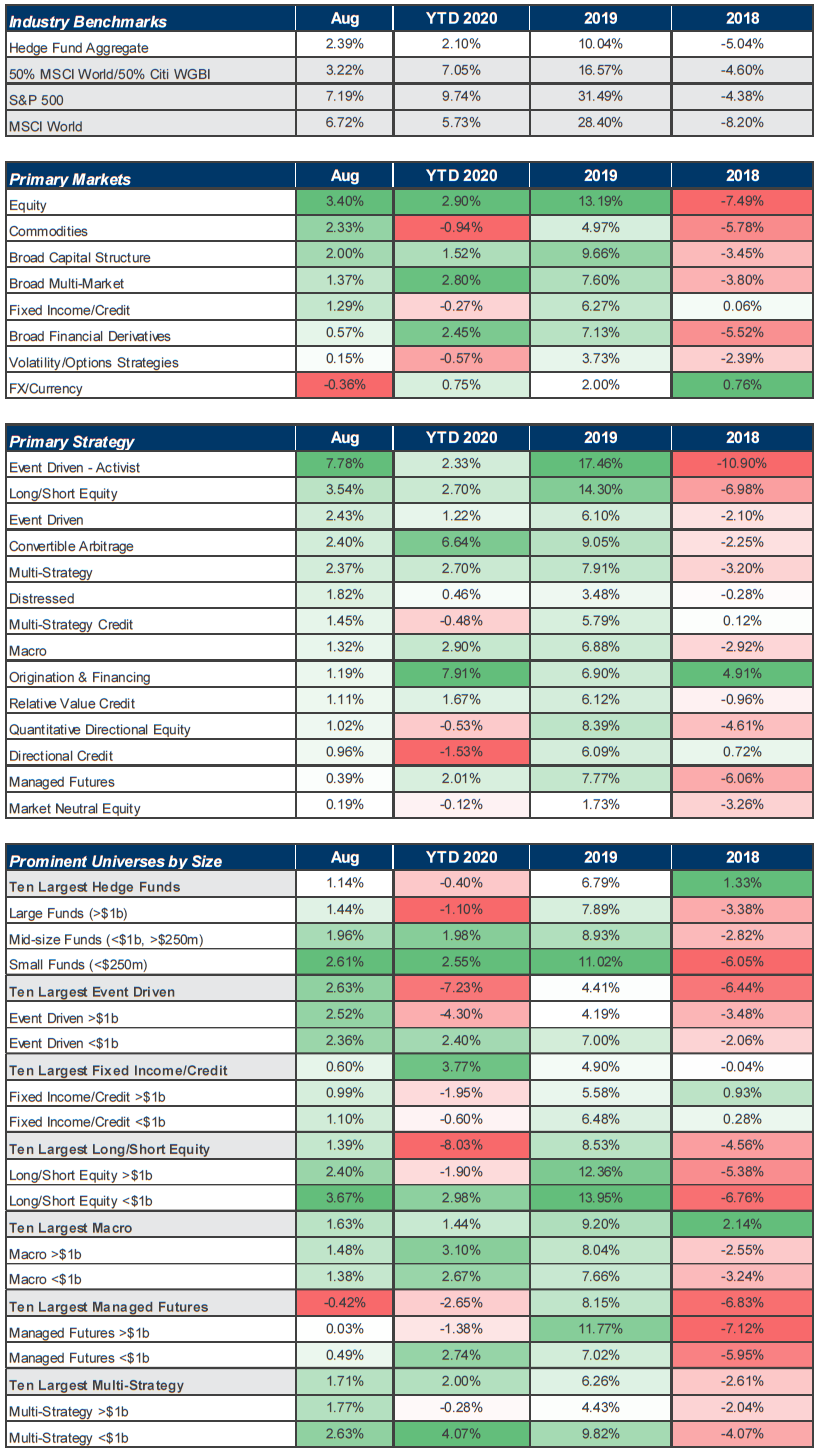 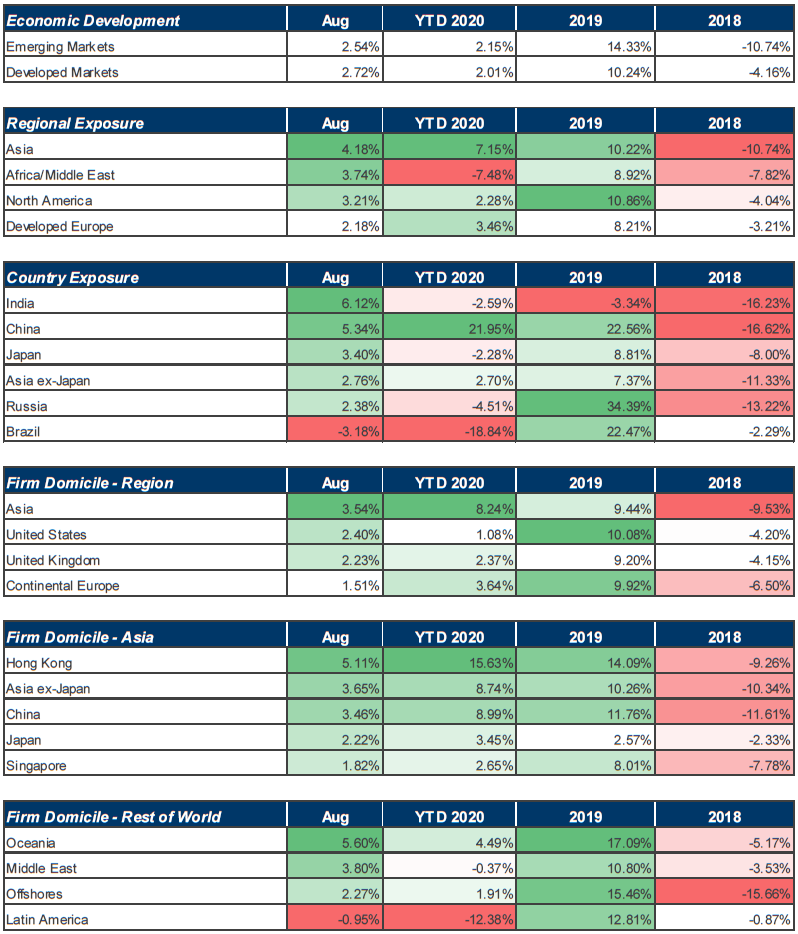 These stats are pretty shocking considering the S&P 500 is up over 7% already in 2014 - see more details below  UPDATE: 1:25PM EST We tried to condense headline, but... Read More

Groupon Inc (NASDAQ:GRPN), the daily deals website, has seen far better days. Having lost 90 percent of its value from its IPO’s peak, the company seems to be fighting... Read More

Prescience Point Research Group is pleased to release its latest report on Chicago Bridge & Iron Company N.V. (NYSE:CBI). The complete 40 page report can be downloaded at our... Read More