Mergermarket has released its Global M&A roundup for 2020, including its financial advisors league tables. Take a look at the report HERE and don’t forget to review the charts breaking down the activity by sector, value, year-to-year analysis, etc.

A couple key findings include: 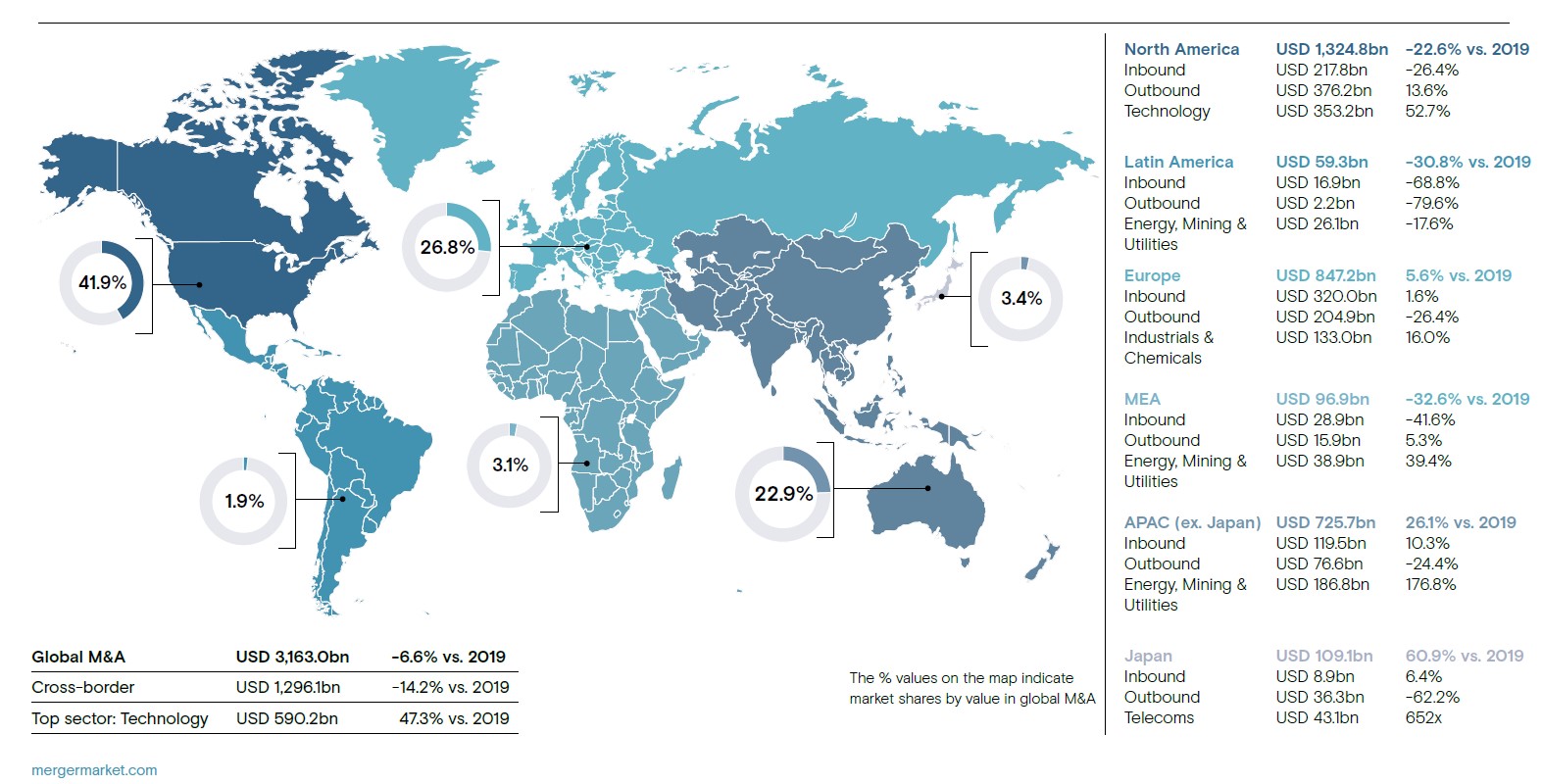 With the New Year, dealmakers hopefully look towards the future. But even as 2020 recedes into the distance, its impacts continue to shape the market. Corporates and sponsors alike have spent their way through the crisis in the second half of 2020, with unprecedented levels of deal making in the final few months of the year. The USD 2.2tn of overall M&A activity in 2H20 represented the highest halfyear figure on Mergermarket record, while the USD 1.2tn announced in the final quarter was the highest quarterly value since 2Q07.

In contrast, activity in the first half was unsurprisingly subdued (USD 971.0bn), leading to an overall 6.6% year-on-year decline by value. Amid the social and economic disruptions caused by COVID-19, deal count was down 15.5%, from 20,767 to 17,545. While a few sectors fell, others rose, making it a bumpy ride for deal professionals.

Although M&A markets went into stasis, debt and equity capital markets came alive. In addition to a significant volume of high yield bond issuances and secondary equity offerings, special purpose acquisition companies (SPAC) became the phenom of 2H20, particularly in the US. A total of 255 SPACs were launched in 2020, raising USD 83.1 bn, compared to USD 15.5bn across 73 listings in 2019, according to Dealogic data (Mergermarket and Dealogic are owned by ION Group).

Not all companies could find the needed capital, however. Insolvencies and bankruptcy filings climbed steadily through the year – Debtwire Restructuring data show a 33% yearon- year increase in US filings, from 240 to 319. Debtwire is Mergermarket’s sister publication.

M&A journey through the year

The year started off slow in January, particularly in terms of deal values, but recovered to a degree over February and March. Deal count continued sliding until April, when the bottom fell out. As COVID-19 shutdowns took hold, activity dropped to levels not seen since the Global Financial Crisis.

Showing impressive resilience, M&A activity bounced back in late spring and early summer, with July setting the tone for the rest of year. September was the single most active month in 2020 (USD 415.6bn) with a surge of large, multi-billion dollar transactions.

The biggest gainer in 2020 was Asia (including Japan), which saw its global market share rise in both value and volume (up by 7.4% and 2.2% respectively). Europe also saw its share of global deal value increase to 26.8% (from to 23.7%) while registering a small decline in overall deal count. North America, which had seen its global market share steadily rising over the years, saw its deal value decline substantially (from 50.5% to 41.9%) while remaining the same on deal count (33.3%).

Meanwhile, smaller-sized transactions saw double digit declines across the board. In particular, deals under USD 250m experienced a 12.1% decline in value and 1,270 fewer transactions compared to 2019.

On the back of the trends magnified by the pandemic, Technology, Media, & Telecommunications (TMT) climbed 56.8% by value compared to the previous year, from USD 543.4bn to USD 851.8bn, equivalent to more than a quarter of overall global activity. Volume on the other hand declined slightly to 3,943 deals.

After a clear decline in the number of deals in the second quarter in the wake of the pandemic, activity in 2H20 matched the average half-year deal volumes of recent years. On deal count, private equity buyouts dipped 7.4% versus an 18.8% fall in terms of total M&A. Sponsors were involved as bidders in just over a quarter of all M&A deals globally – the highest annual figure on Mergermarket record.

Private equity firms have continued to invest in innovative techrelated assets. Technology remained the most active sector for sponsor-led investment, reaching 913 deals valued USD 158.7bn compared to USD 117.8bn across 845 deals last year. Pharma, Medical & Biotech was also in the spotlight for PE firms, with 436 deals worth USD 70.6bn, passed last year’s volume (374 deals) and reaching its highest overall deal volume on record. With firms reinventing products and services to combat the effects of the pandemic, median EBITDA figure for buyouts stand at 12.1x, around the same level as 2019 – despite previous projections that valuations would fall due to the crisis.

“Even as 2020 recedes into the distance, its impacts continue to shape the market” – Mark Druskoff, Data-Driven Content, Coordinator 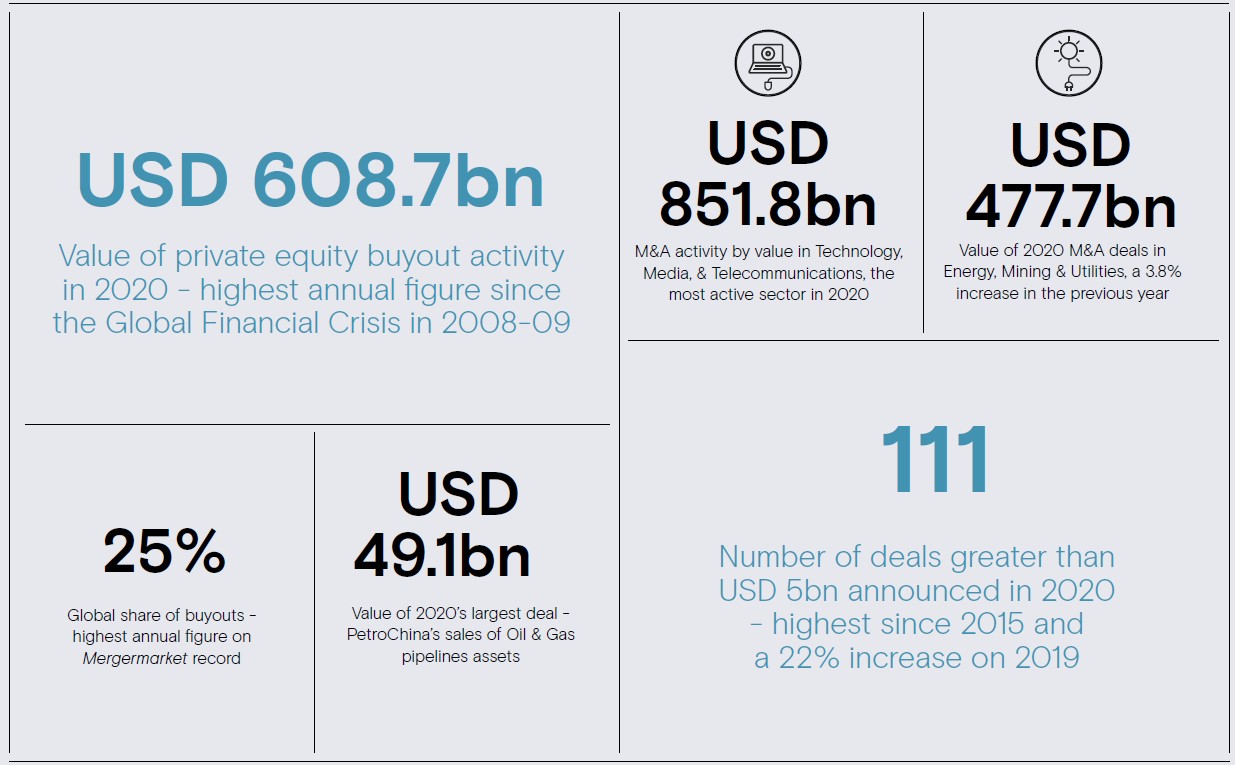 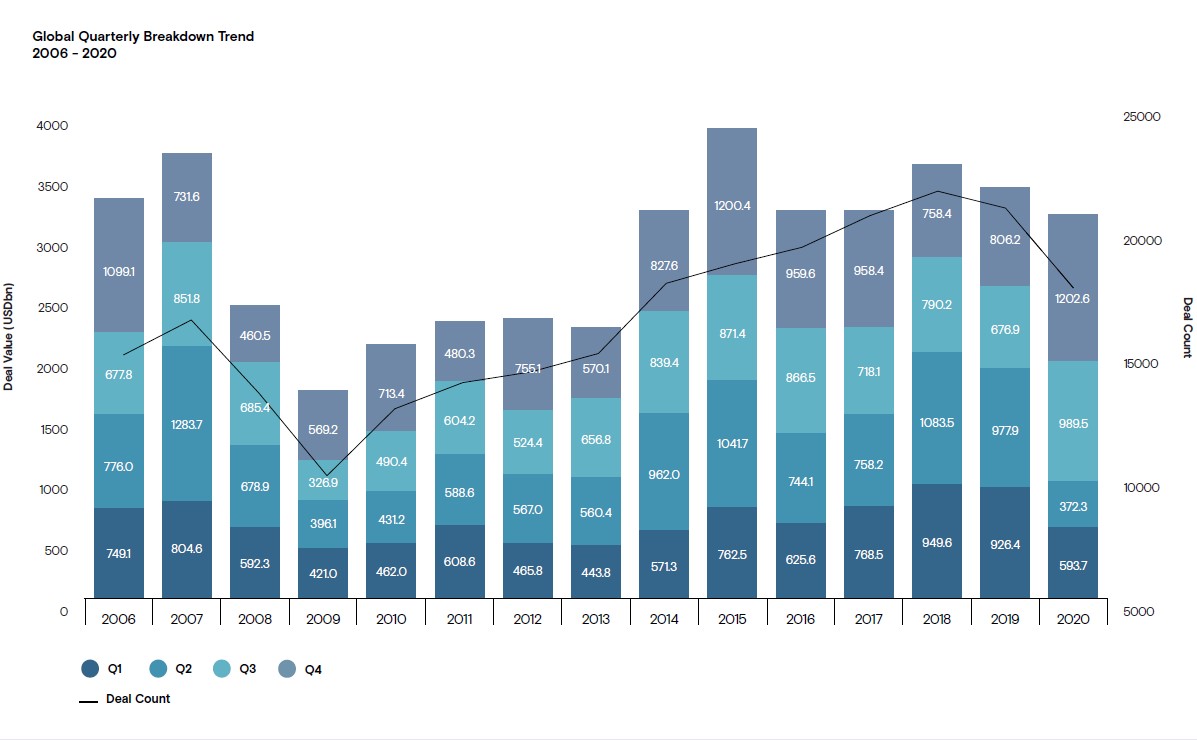 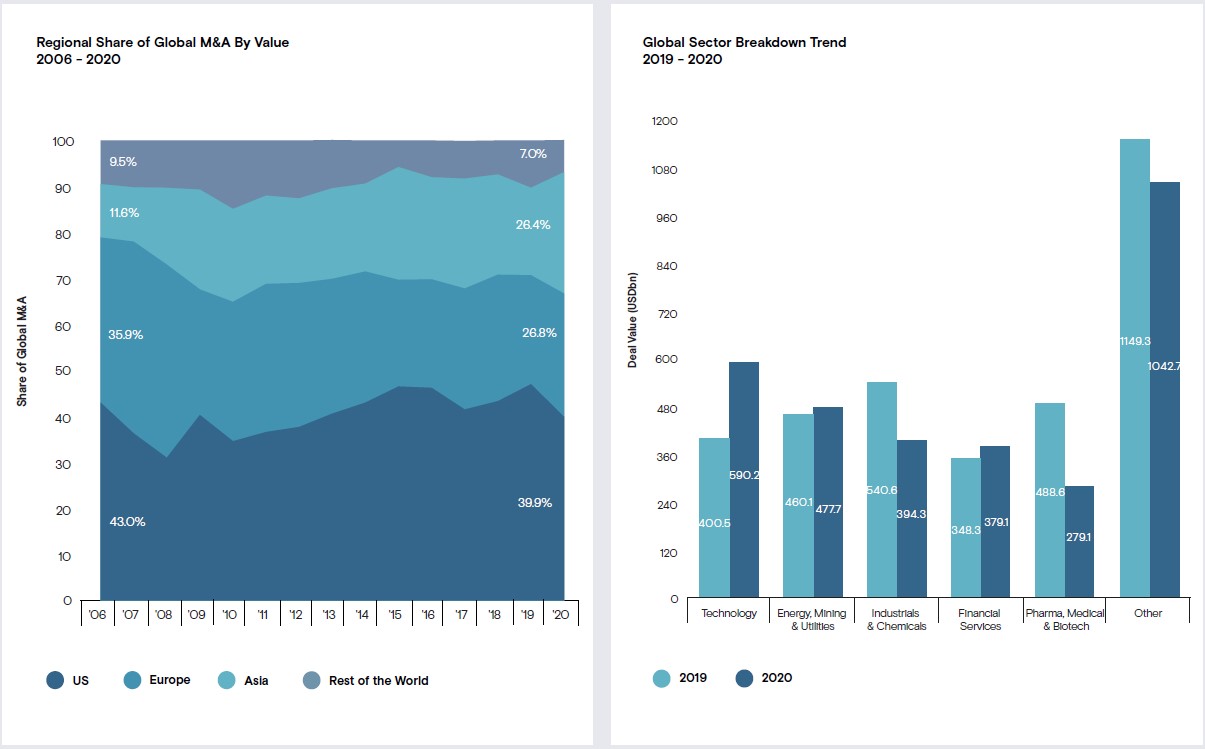 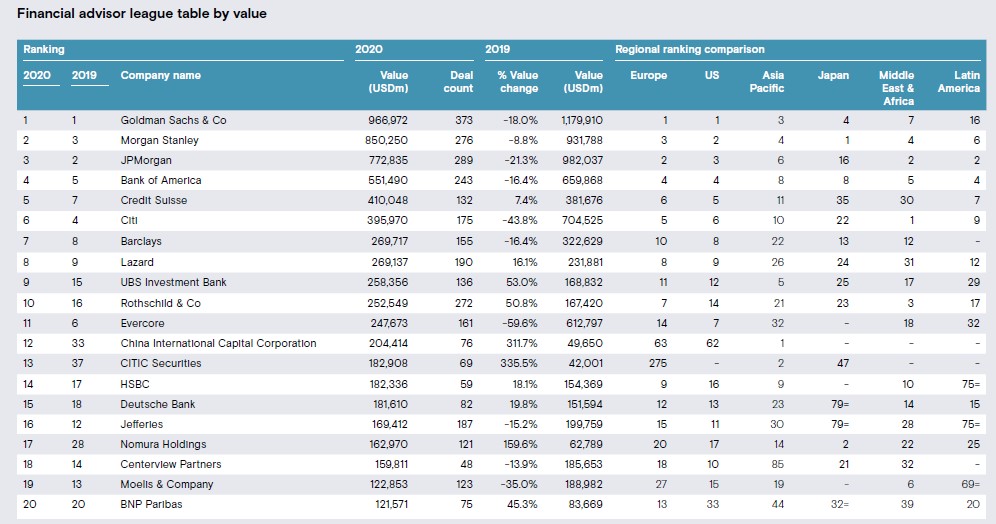 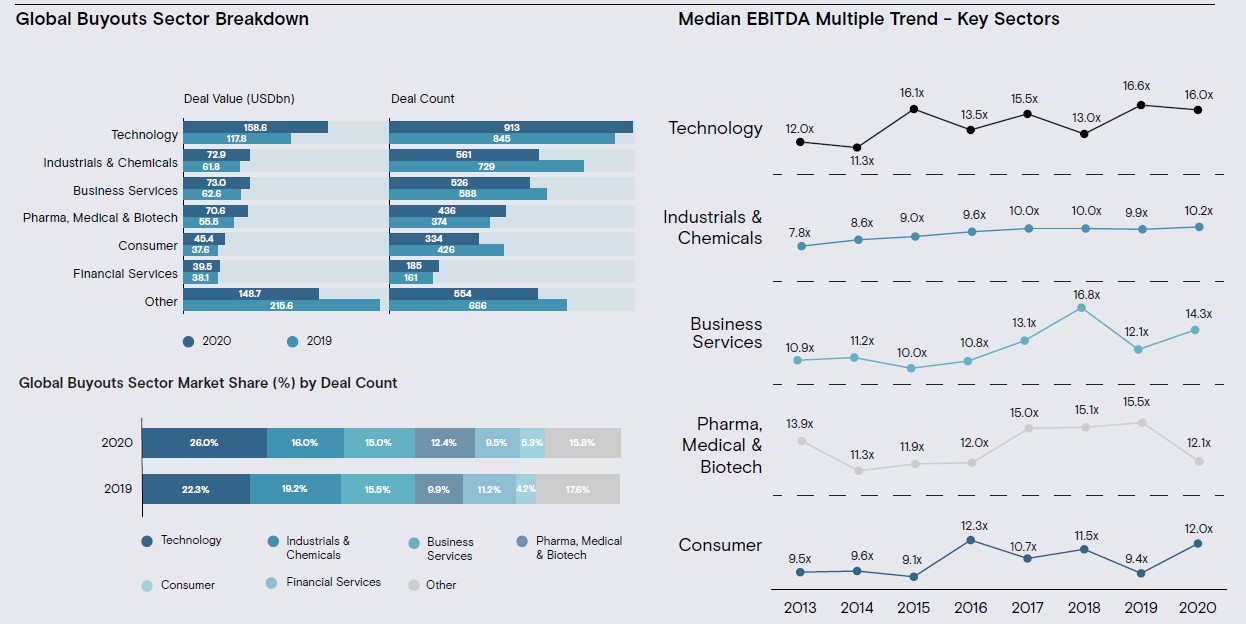 Via: aswathdamodaran.blogspot.com Note that the countries with the lowest PE ratios (in yellow and orange) are also among the world's riskiest (a large swath of Africa, Venezuela (Latin America) and Eastern... read more

An Open Letter to the FOMC: Recognizing the Valuation Bubble In Equities  John P. Hussman, Ph.D. http://www.hussmanfunds.com/wmc/wmc131125.htm The chart below is from one of the best tools that the Fed offers... read more

GS CEO Blankfein: This Could Very Well Be The Century Of China

Largest ever fund closure in 2016 is followed by multi-billion dollar vehicles at start of 2017 2016 Hedge Fund Letters The private equity secondaries market has enjoyed robust fundraising in recent... read more

Apple and Disney In Talks For Adding WatchESPN To AppleTV

It would seem that The Walt Disney Company (NYSE:DIS) will be in business with Apple Inc. (NASDAQ:AAPL) if ongoing talks go as planned. Walt Disney Co.’s ESPN sport channel is... read more 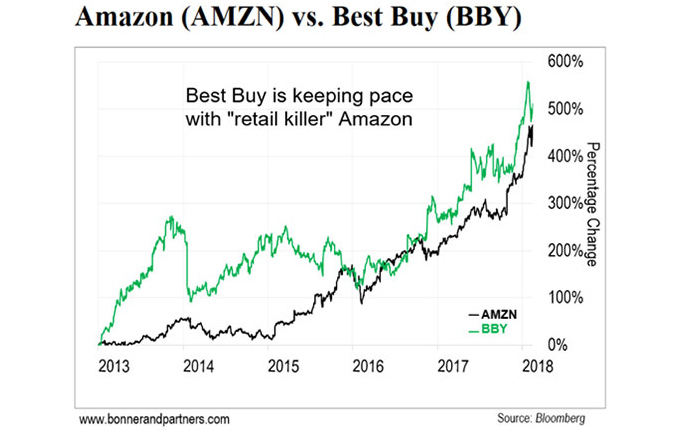 Editor’s Note: When it comes to finding stocks that can make you a fortune, we turn to our friend Chris Mayer. His book, 100 Baggers: Stocks That Return 100-to-1... read more 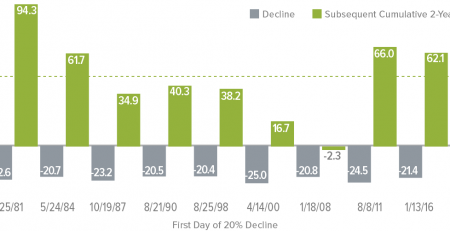 Senior Investment Strategist Steve Lipper analyzes the recent small-cap market through four charts. Q1 hedge fund letters, conference, scoops etc What does recent volatility tell us about where we are in... read more