Hedge fund commitments from US public pensions total $12.5bn during 2020 with net $1.7bn of flows

HFM Insights’ latest report covers US pensions in Q4 2020, summing up the year and analysing US public pensions’ interest in hedge funds and other asset classes.

On the face of it, US public pension data paints an unflattering picture for hedge funds in 2020.ir activity to top ups with managers they invested with or knew already. Gross inflows were modest and only just net positive, with declining quarterly commitment totals in H2. The annual trend for hires was similar – downward and only just ahead of terminations. But the top-down view is only part of the story, with positive investor sentiment and unfulfilled commitments from Q4 pointing to large net inflows in H1. Los Angeles County (LACERA) is one such example; its hedge fund portfolio was still over $900m underweight as of November 2020, and two manager recommendations have been scheduled for early 2021. Albourne Partners, LACERA’s hedge fund consultant, was also hired by CalSTRS and the $80bn Oregon state pension in Q4 to build out their respective diversifying hedge fund portfolios in the coming months. As a result, the quarterly decline in commitments seen during H2 is unlikely to continue. The hedge fund plans underway at the aforementioned US pensions alone would be enough to reverse the recent lull. Our data and intelligence suggests that other public schemes in the US have similar intentions. 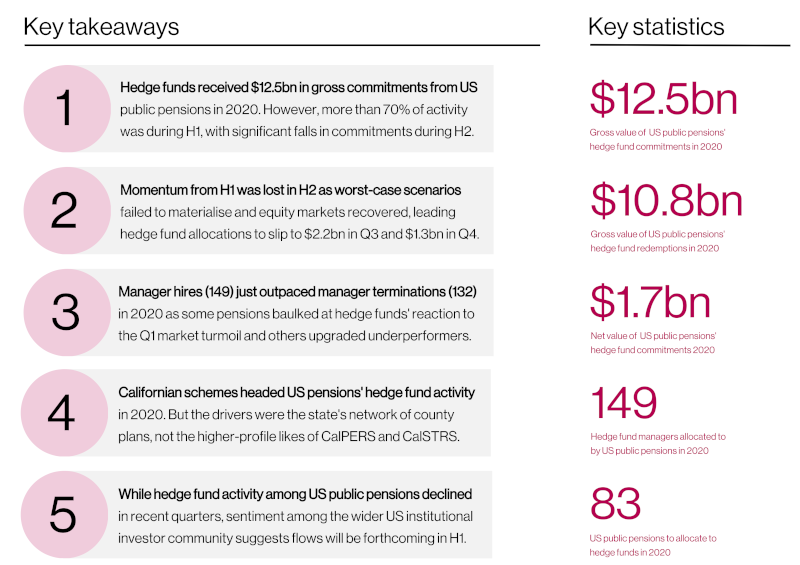 Modest $12.5bn uptick belies growing interest in hedge funds: Hedge funds received $12.5bn in total commitments from US public pensions in 2020, as large allocators seized the opportunity to invest with previously hard-closed managers, established new portable alpha programs and stepped up their emerging manager efforts. More than 70% of this activity was recorded in H1, with a relatively slow Q3 and Q4 ($1.3bn). 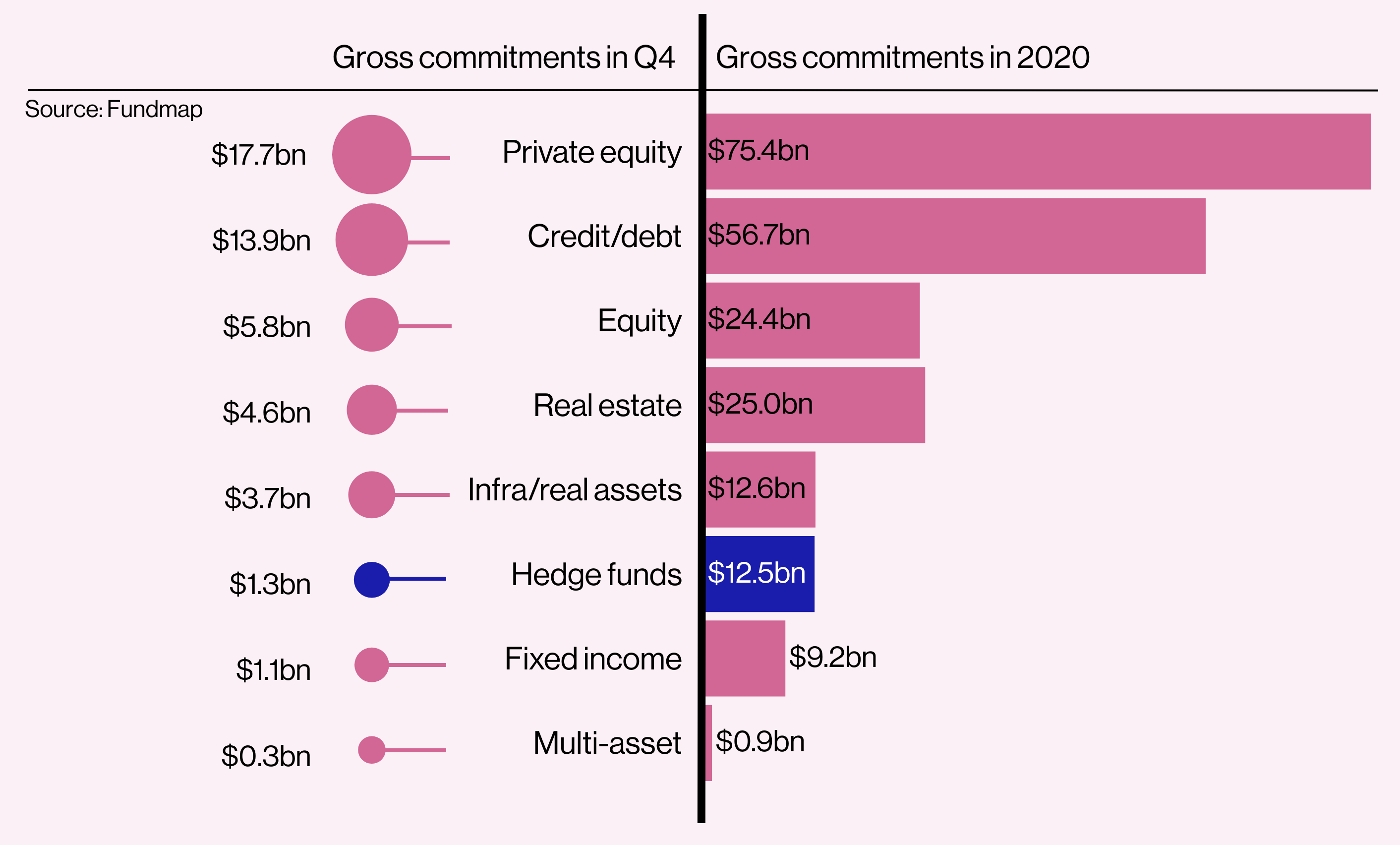 Small retreat in quarterly hedge fund commitments at year end: US pensions made fewer and less commitments to hedge funds in Q3 than in Q2, and the cheques are smaller than those in Q1. Interviews conducted by HFM analysts in Q2 suggest that the majority of new allocations have been, and will be, top-ups with current funds. 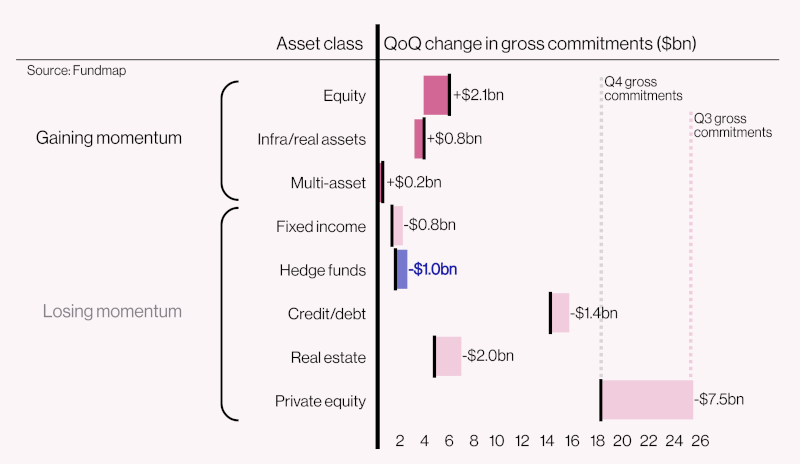 Hedge funds and private credit due further inflows in H1: While hedge fund activity among US public pensions has declined in recent quarters, interest among the wider institutional investor community suggests greater inflows are forthcoming. HFM survey results** found that North American institutions are more likely to increase their allocation to hedge funds and private credit than any other asset class in H1. 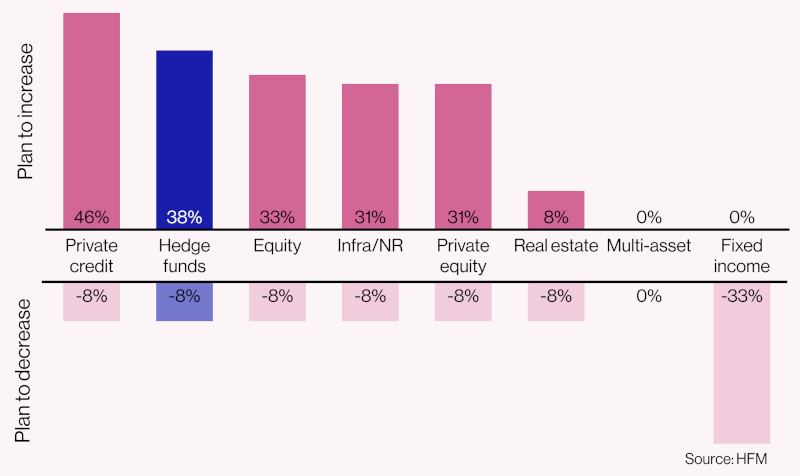 Los Angeles Country (LACERA) made a series of notable hedge fund allocations in Q4 and will remain active in early 2021; its hedge fund portfolio was still over $900m underweight as of November 2020, and two recommendations are scheduled for Q1. LACERA’s consultant, Albourne Partners, was the most active in 2020 and will also source managers this yera for CalSTRS and the $80bn Oregon state pension. Their plans, and others, will help reverse the recent drop in US pensions; hedge fund activity.

Hedge funds: an upward trend for commitments from a low base after declining activity in 2020

Across private equity, there was virtaully no outflow from US public pensions during 2020 as schemes continued allocating to larger, long-established managers throughout. This reward for consistent past performance was matched by investment consultants, where experience again proved key in hires and total value of tickets. Even as gross commitments and mandates tapered off in Q4 following a strong Q3, the dollar total per mandate remained steady, with an average ticket of nearly $100m.

The value and number of new credit/debt commitments from US public pensions fell in Q4, but rounded off a strong year that suggests an upward trend will continue into 2021. Overall, the asset class saw inflows of nearly $53bn from US publics in 2020, the second highest increase in absolute terms after private equity and by far the highest relative to existing industry assets. .

Credit/debt: Positive from a high base; the asset class pensions are most likely to allocate in H1

Long only fixed income mandate fell in the first quarter of 2020, both in number and total value, as the outlook for the US and global economies improved, and investors moved into riskier asset classes. Q2 marked the peak of US public pensions’ interest in fixed income in the past year, as they reacted to the initial fallout from the coronavirus pandemic. Despite this, individual fixed income managers won sizeable commitments from US public pensions in the past 12 months.

Daniel Kahneman has been a pioneer in the field of behavioral psychology, changing the way we think about human behavior. So I asked him: "What do you want to... read more

When Sanford Bernstein’s Jay Huang looks back at 2017, he doesn’t see the oddest political wrangling accompanied by surreal market environments. He appears more awed by the pace of... read more

Employment Trend May Not Be Your Friend by 720 Global Loan Delinquencies may be Signaling Recession On June 2, 2016 the Bureau of Labor Statistics (BLS) stunned economic prognosticators and the... read more

The latest updates on Chinese Banks and the shadow banking system China is continuing to clamp down on excess in its financial system as policymakers seek to rein in risky... read more

Rember Abeconomics and the BOE buying lots of stocks and other assets? One analyst has states that it's an official monetary policy failure During September last year, the decision by... read more

Zero Wage Expansion Is A Result Of Technology And Over-Financialization

What is the reason for Zero Wage Expansion since 1980? Demographics have become the go-to explanation for all economic problems during the past few decades. The Federal Reserve announced last... read more