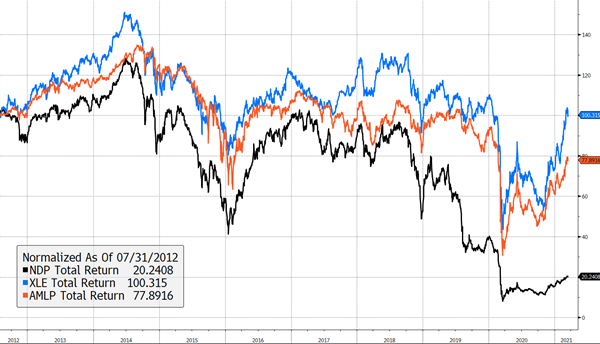 NEW YORK, March 19, 2021 (GLOBE NEWSWIRE) — Aristides Capital LLC, which together with its affiliates beneficially owns 304,131 shares of the outstanding common stock of Tortoise Energy Independence Fund, Inc. (NYSE: NDP), today issued a public letter to NDP’s shareholders outlining its concerns regarding the proposed merger with Tortoise Pipeline & Energy Fund, Inc. (NYSE: TTP) and announcing that it would be voting against the proposed merger.

Tortoise Energy Independence Fund, Inc. (“NDP” or the “Fund”) announced in November that its board of directors (the “Board”) has recommended merging NDP shares into the Tortoise Pipeline & Energy Fund, Inc. (“TTP”), another of Tortoise’s closed-end fund vehicles focused on the energy space, and then changing the strategy to begin investing into renewable and power infrastructure companies.

We are writing as fellow shareholders to express our dissatisfaction with the Fund’s managers and the Board, and to announce that we have determined to vote “NO” on this merger. In our view, management’s inability to create value for shareholders has been clearly demonstrated over the past seven years, and we view this proposed merger as a last-ditch effort to buy more time to run a risky strategy that has dramatically underperformed peer funds and the index. Instead of pursuing this merger, we urge the Board to convert to an open-end fund or liquidate the assets, which we believe would provide substantial value realization to shareholders, by eliminating the Fund’s deep discount to its net asset value (“NAV”). Were the Board to pursue this shareholder-friendly strategy, as of the writing of this letter, shareholders would see immediate gains of approximately 30%.

Since inception, an investment in NDP has lost 80% of its value (assuming dividend reinvestment), dramatically worse than energy industry ETFs such as XLE (+0.3%) or AMLP (-23%). [source: Bloomberg]

Given the nature of its mandate in energy investments, one would have expected NDP to generally track the ups and downs of both the broad energy index (as represented by the S&P Energy Select Sector Fund, ticker XLE) as well as the Alerian MLP Index (as represented by the Alerian MLP ETF, ticker AMLP), between its inception on 7/31/2012 and the market close on 3/17/2021.1

While an investment in the energy sector, as represented by the XLE, would have been a bumpy ride over this time period, after reinvesting dividends it would have been essentially flat, up 0.3%. MLPs have performed somewhat worse than the sector as a whole, but the high dividends have allowed investors to make back much of their losses; an investor in the Alerian MLP Index tracking fund (AMLP) would be down only about 23% over the same period. By contrast, NDP has underperformed dramatically. An investment in NDP over the same time horizon, with dividends reinvested, lost a staggering 80% of capital.

The difference is stark. If an investor had purchased $100,000 in an index fund holding very similar assets to NDP, that investor would still have between $75,000 and $100,000 in their account depending on the specific blend of funds, whereas that same $100,000 investment in NDP, with dividends reinvested, would now be worth just over $20,000. To make matters worse, NDP charges an expense ratio of 2.03%, in contrast to AMLP and XLE which charge only 0.85% and 0.12%, respectively, meaning that not only did an investment in NDP lose 80% of its value, but the Fund’s management collected a hefty payday of over 13% of an investor’s initial capital for this dismal result.

The blame for this egregious underperformance lies with squarely with the Fund’s management. As stewards of our capital, they have a fiduciary duty to make prudent investments seeking to limit the Fund’s risk and grow its value over time. Unfortunately, that has not happened. Assets for NDP peaked around $528 million in July 2014. At that time, the Fund had borrowings of $57 million, for a leverage ratio of less than 11%. When the value of the assets began to fall during the oil plunge of 2014-2015, management chose not to pay down this debt or raise cash to buy distressed assets at bargain prices, but rather they let their leverage ratio increase, placing a massive and risky bet on an immediate recovery in energy prices. As a result, the Fund’s debt/equity ratio multiplied by a factor of four to nearly 40% in Q1 2016, by which point the Fund’s value had already fallen almost 70%. The Fund then waited a further two years until it finally reduced leverage in early 2019, paying back its debt only after investor capital was already permanently impaired. Perhaps management’s priority was maintaining high levels of assets on which to charge fees, rather than practicing prudent leverage management. As a result of their decisions, from its peak at $527 million in assets on 7/4/2014 to its trough eighteen months later on 2/11/2016, NDP lost investors $337 million, or $75 million more than a comparable investment in AMLP would have fallen. 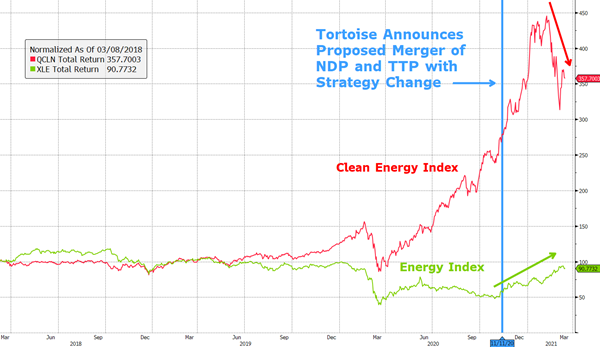 After a massive run, valuations in the clean energy space are excessive. Now is a terrible time to change part of the Fund’s investment mandate into clean energy, as NDP’s management has proposed. [source: Bloomberg]

We are particularly concerned by NDP’s proposed change in focus towards renewable and power infrastructure companies. If the Fund’s portfolio managers are unable to add incremental value over a benchmark in the sector of their “expertise,” why would we expect that would change by venturing into a sector that is new and unfamiliar to them? After incinerating 80% of investors’ money failing to perform in the fossil fuels space, management has seemingly decided to move on to the next hot sector, chasing green investments at a time of historically high valuations, perhaps in hopes of making back their massive losses or at least keeping capital locked up for longer in order to charge more fees.

The Fund’s closed-end structure is, in theory, supposed to insulate management from the performance pressures faced by open-end vehicles such as mutual funds and actively-managed ETFs that are forced to chase fads to keep and raise capital. Without having to worry about investors fleeing, management should be free to focus on making judicious, out-of-favor investments in unloved sectors with its permanent capital and patiently waiting for their value to be realized at a substantial profit. Indeed, we think that now seems to be a reasonable time for that, with traditional energy sector assets at historically cheap valuations and many high-quality MLPs yielding north of 8-10%. However, the Fund instead wants to diversify away from this sector at current valuations, presumably because green and alternative energy companies are currently more popular and easier to market and gather new assets for. We believe this is an attempt to “put lipstick on a pig” down 80% and spin a new story to entice new investors into a fund that may continue to underperform going forward. It seems that investors have received all the drawbacks of a closed-end fund’s illiquidity, discount to NAV, and inability to withdraw capital, in addition to the drawback of an open-end fund’s underperformance, trend-chasing, and asset-hoarding nature, without the benefits of either structure.

Indeed, we think that events since the proposed merger announcement on November 11, 2021 have already begun to vindicate our point of view. Since the announcement, a broad index fund of green energy stocks (the NASDAQ Clean Edge Green Energy Fund, ticker: QCLN) has risen only 28.6% as of the close of March 17, 2021, and remains 20% below its peak value. By contrast, the broad energy index has risen over 55% in value over that same time period, and continues to make new highs, as investors turn bullish on legacy energy assets. It is simply not the case that diversifying into green energy will meaningfully drive investor returns and lower risk. Rather, the Fund will be exchanging its investment in undervalued stocks poised to perform well with investments in risky, expensive stocks that could decline precipitously in value.

The Fund’s presentation and FAQ states that the ostensible reason for this merger is that its “research suggests that funds with more exposure to global utilities and infrastructure which we define as renewable and power infrastructure tend to trade closer to NAV.”

We disagree strongly with this assessment. We believe that the Fund’s discount reflects the market’s accurate view of management’s poor track record, and therefore the market is rationally discounting the Fund’s expected future underperformance. It is our belief that current management is incapable of closing this gap by changing its investment strategy. We believe that the best chance of closing this discount to NAV and recovering maximum value for shareholders is for the Fund to liquidate its assets and return the entirety of its capital to shareholders.

For these reasons we intend to vote “NO” on the proposed merger. This is our way of telling the Fund’s management that we have had enough value destruction and will not allow any more.

We expect that the Fund’s management will attempt to divert attention away from its poor track record by calling Aristides a “vulture” that is somehow trying to advance its own self-interest at the expense of other shareholders. This is simply not true; we are value investors seeking to ensure an outcome that fairly, equitably, and profitably creates value for us and for all shareholders, rather than simply allowing management to continue lining their pockets to the detriment of all shareholders.

The perfect hands-free investment plan is to buy dividend stocks with an attractive dividend yield, sit back and watch the income flow. Such a strategy requires little or no... Read More

Bapoust has had some success lately with biopharma companies, now they are involved in another biopharma investment, albeit on a small scale. See more on that topic below. Also see... Read More

The Federal Housing Finance Agency (FHFA) acting director has criticized the government's plan to allow mortgage defaulters that contributed to the collapse of the housing industry keep hold of... Read More

Steven Romick May 2017 Letter: Two Decades Of Winning By Not Losing

Steven Romick letter for the month of May 2017, titled, Two Decades Of Winning By Not Losing. Get The Timeless Reading eBook in PDF Get the entire 10-part series on Timeless... Read More

The U.S. dollar's climbdown from a 14-year high has marked the first divergence in the so-called Trump trade since the Republican was elected president. It may have been fueled... Read More