Gold vs. The Stock Market

More than 3,000 years ago in the early 12th century BC, Greco-Roman legend tells us of a mythical pair of monsters located in the Strait of Messina in southern Italy.

The monsters were named Scylla and Charybdis. And both Homer’s Odyssey and Virgil’s Aeneid describe the terror of sailors who came into contact with them.

Scylla was on one side of the Strait, and Charybdis on the other. But because the Strait is so narrow, it was impossible for sailors to avoid both of the monsters, essentially forcing the captain to choose between the lesser of two evils.

In Homer’s narrative, for example, Odysseus is advised that the whirlpools of Charybis could sink his entire ship, while Scylla might only kill a handful of his sailors.

So Odysseus chooses to sail past Scylla: “Better by far to lose six men and keep your ship than lose your entire crew.”

The story is a myth. But the idea of having to choose between two terrible options is very real.

It appears that the Federal Reserve has landed itself in this position.

In its efforts to boost the economy during the pandemic, the Fed slashed interest rates so much that the average 30-year mortgage rate for homebuyers reached an all-time low of 2.65% earlier this year.

The US government 10-year Treasury Note dropped to a record low 0.52%.

And the 28-day US government Treasury Bill rate actually turned negative for a brief period– something that has never happened before.

The effects of such cheap rates are obvious.

With corporate borrowing rates so low, the stock market has boomed. With consumers able to borrow money so cheaply, home prices have surged to an all-time high.

Yet in slashing interest rates to record lows, the Fed has essentially sailed right into the Strait of Messina. And they’re about to find themselves stuck between two monsters.

On one side of the Strait is the Inflation Monster, which grows stronger and more menacing with ever dollar the Fed conjures into existence.

Last year the Fed increased the supply of US dollars in the financial system (M2) by 26%– the single largest annual increase since 1943.

In simple terms, the Fed ‘prints’ money (albeit electronically) and sprinkles it around the financial system.

This is a form of debasement, not much different than how ancient Roman emperors cut corners by reducing the purity of their gold and silver coins.

There are famous historical episodes, like Zimbabwe, Venezuela, or the Weimar Republic, where the government’s endless money printing caused hyperinflation.

But there are countless ‘quieter’ examples of inflation– like in Brazil, where inflation is now over 5%, or Turkey, where the annualized inflation rate is about 15%.

15% isn’t exactly hyperinflation. But it does make life pretty uncomfortable, especially when wage growth fails to keep pace. Every year people find themselves poorer and worse off.

Yet the Federal Reserve ignores these countless historic examples, recently claiming to Congress that relentless money printing will not cause inflation.

The Fed’s reasoning is that, because their money printing hasn’t caused inflation yet, it never will. This is pretty dangerous logic, given that rule #1 in finance is ‘past performance is no guarantee of future results.’

But I’ll come back to that in a moment, because on the other side of the Strait is the Market Monster.

Like the Inflation Monster, the Market Monster grows larger with ever dollar the Fed creates. It FEEDS on cheap interest rates.

Look at the US stock market: prior to the pandemic, the Dow Jones Industrial Average reached a record high of just over 29,000 points. Today, the market is more than 10% higher.

Lower profit, lower revenue, higher debt, higher taxes– NONE of these trends should be favorable for stocks. Yet the market is UP, with the average Price/Earnings ratio in the S&P 500 now an incredible 40x.

The Fed knows that the strength of the stock market… along with the real estate and bond markets… is based on cheap interest rates.

They also know that if they raise rates, these markets could suffer a dramatic downturn.

So the Fed has two options to choose from, and neither is good: raise rates and cause markets to crash. Or, don’t raise rates, and risk inflation.

I’m not suggesting that the US is going to turn into Zimbabwe and suffer terrible hyperinflation.

But inflation levels similar to Brazil or Turkey are definitely possible. It happened before in the 1970s when inflation hit double digits– and stayed that way for years.

And given the Fed’s refusal to acknowledge the slightest chance of inflation (heresy!), it makes sense to consider preparing for the possibility.

I would point out again that gold has a 5,000 year track record of performing well during times of inflation.

It’s also among the few major asset classes that’s NOT currently at a record high.

Unlike the stock market, which has reached an all-time high despite lower earnings and higher debt, gold is down 16% from its peak even though inflation expectations are the highest they’ve been in years. 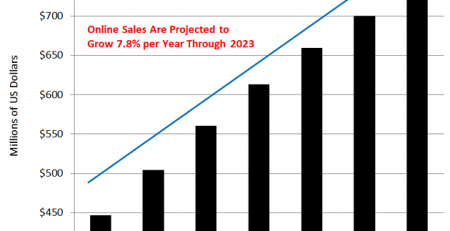 Late last year, the company overtook Apple to became the third-largest online retailer in the US. Only Amazon and eBay are larger. Q2 hedge fund letters, conference, scoops etc Walmart is... Read More

2013 was a tough year to be a short seller of equities, as Dialectic Capital Management returns indicate.  With the hedge fund’s 2013 annual performance reported in a 4th... Read More

When The Coca-Cola Company (NYSE:KO) announced they were re-considering their executive compensation package, David Winters, an activist investor who fought the plan both publicly and behind the scenes, quietly experienced... Read More