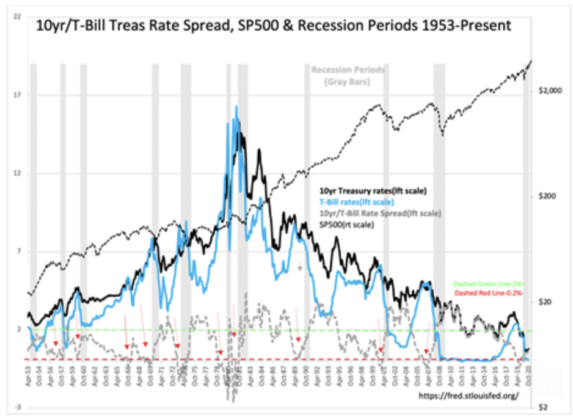 How high a market can climb in any cycle has many inputs all ending in peak enthusiasm at the time, i.e. “Market Psychology”. Everyone will have a reason why markets will not peak at the top, but the historical factor which has helped to time peaks since 1953 is the T-Bill/10yr Treas rate spread.

It works if one treats rates as reflecting investor psychology.

Currently the T-Bill/10yr Treas rate spread is widening. The US economy is in a strong recovery outside of government lockdowns. Lockdowns are being eased every week. Employment is recovering, retail, housing, manufacturing and other indicators reflect a “V” shaped recovery. Market have always risen with these conditions and are expected to do so this time as well. Economic activity and the equity markets are likely to peak once we approach an “Inverted Yield Curve” condition. Using past measures of market psychology and fundaments suggests an SP500 peak of $6,000+ in 3yr-5yr. This estimate comes from the SP500 Value Investor Index. 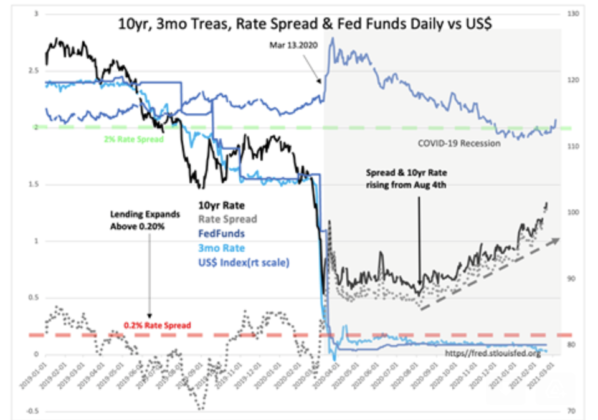 With market psychology and the ever presence of unpredictable geopolitical events, predictions of this type have little precision. Simply, the next inverted yield curve will likely be the market peak. Along the way, investors will speculate in one theme or another. COVID provided a focus which is now ending as seen in the correction of VOOG(SP500Growth ETF). The VOOV(SP500 Value RTF) is gaining investor interest. COVID is behind us and VOOV is very likely to out-perform VOOG for the next few years. 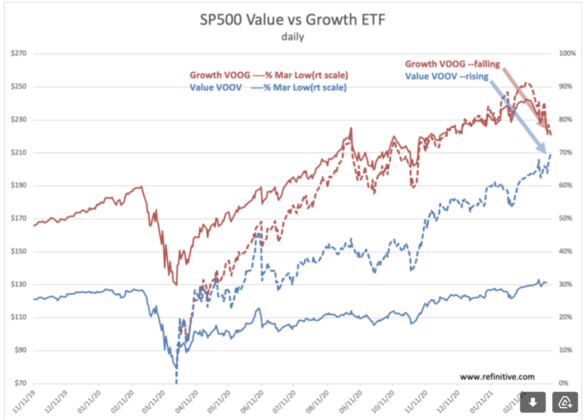 For now, markets remain in an uptrend as ~8mil-9mil currently unemployed individuals return to work. The sharp rise in the T-Bill/10yr Treas rate spread indicates a sharp rise in investor optimism. Current levels indicate much more is yet to come.

After a quarter of slightly negative performance, down just under one percent for the quarter ended September 30, the Loeb Arbitrage Fund sees a fundamental shift in merger activity. ... Read More

David Einhorn is long Twitter according to the hedge fund's Q4 letter to investors - see more on that and other topics below See Q3 letter from Einhorn here and... Read More

Canada is one of the countries that have the opportunity to exploit the massive energy and mineral deposits within the Arctic circle. Others, include the U.S, Russia, Norway, Denmark... Read More