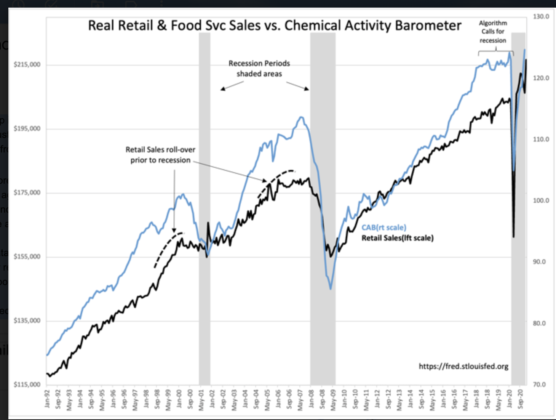 Real Retail Sales report a sharp increase for Jan after a short correction following consumers stocking-up for the COVID lockdowns. The mix reflects a sharp rise in retail and restaurant, bar and etc activity which are recovering customer traffic from low levels. This was a surprise report. Gasoline prices, which have risen sharply from RBOB Gasoline $1.41/gal to $1.59/gal in Jan 2020, actually fell as part of the mix in this report from 18.28% of total sales to 18.11%. This means that even with the sharp rise in fuel prices, retail sales accelerated more sharply than expectations.

There continue to be multiple forecasts for economic correction/market correction. Price corrections may occur any time as they are due to market psychology. The correlation of market corrections with economic activity live up to the age old observation that ‘there are many more forecasts for recession than actual recessions’. The facts remain that retail sales and other key indicators have always stalled prior to a significant economic corrections. Often the retail signal provides a 2yr warning. No such warning is present with retail sales at new record highs. The spike witnessed in the recent data suggest moderating reports are ahead to return to trend at some point.

The market response to this data appears confused. It is very good news and implies consumers returning to retail stores at a faster pace than one would expect which is as much as satisfying social needs as anything else. Higher retail sales imply higher retail store profits and greater demand for onsite employees. Expectations for a significant boost in Feb employment data is supported by January’s Real Retail Sales report.

Emulex Corporation (NYSE:ELX), a provider of data networks, is under the eyes of two noted U.S.-based activist investors these days. Paul Singer's Elliott Management has a 10 percent position,... Read More