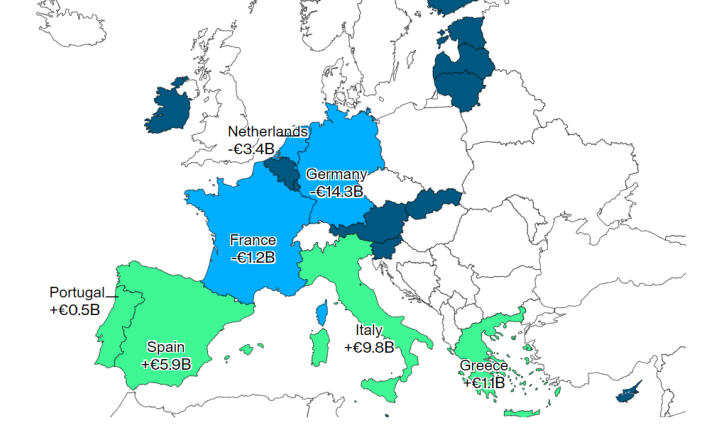 Absolute Return Partners letter for the month of September 2022, titled, “The House of Cards.”

“Without Italy, there is no Europe, but outside of Europe, there is even less Italy.” -Mario Draghi

A summer of chaos

In July, Italian Prime Minister, Mario Draghi demanded loyalty from all members of his coalition government. It was a gamble, and he lost. The demand was flatly rejected by three of the four parties in the coalition – Movimento Cinque Stelle, Forza Italia and Lega. Now, Italy is again looking like the Italy of yesteryear; a country embraced by political chaos after a relatively calm period under Draghi’s stewardship.

The next step in the unfolding crisis is a general election, which will take place on the 25th of September. With just over three weeks to go before election day, the right-wing coalition, consisting of Fratelli d’Italia (FdI), Lega and Forza Italia (FI) retains a comfortable lead over the centre-left coalition, consisting of the Democratic Party (PD), Azione & +Europa (A/+E), Sinistra (AVS) and Italia Viva (IV) (Exhibit 1). 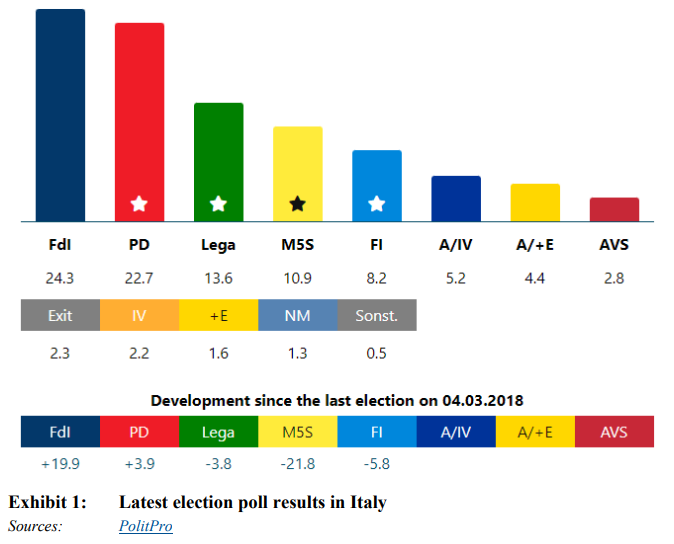 It is worth noting that, within the right-wing coalition that stands to win, there is a fair amount of euro scepticism; however, Italian corporates, which typically support one of the three rightwing parties, are keen to close that exit door once and for all.

You may also wonder why I have made no mention of Movimento Cinque Stelle (M5S). M5S is the biggest party in the current parliament; however, it is effectively two distinct parties today, frequently at loggerheads with each other (you can read more about that here). As you can see in Exhibit 1, M5S stands to lose a huge number of votes, most of which will probably go to the euro-sceptic FdI. After having served in various governments since the last general election in March 2018, M5S stands to be decimated and seems unwilling to join a new government until the dust has settled.

The collapse of Draghi’s government shouldn’t really come as a surprise. Over the past 30 years, no less than 17 prime ministers have taken on the thankless task of trying to run a country that has become a bit of a joke in the rest of Europe, politically speaking. Every time there has been a need for difficult decisions to be made, a technocrat has taken charge.

Giuliano Amato did so when Italy needed to restructure in preparation for joining the euro. More recently, Mario Monti saved Italy from the ramifications of the euro crisis post GFC, and Mario Draghi was brought in to raise Italy again after the damage caused by the pandemic. These gentlemen have one thing in common – they were not affiliated with a particular party when becoming PM. They were simply brought in to sort out a problem.

This unique Italian feature appears to have created a spirit of carelessness and irresponsibility amongst Italian politicians. ‘We can always bring somebody from the outside in if needed’ has become the mantra, so to speak. In practice, the implication of this has been that Italy has fallen further and further behind in terms of international competitiveness, as the appetite to restructure has been limited. Take for example the outdated Italian labour market or the hopelessly inadequate public administration in Italy, both of which need to be restructured big time.

Now, a confrontation between Italy and the EU looks increasingly likely. Italy stands to receive no less than €248Bn of the EU’s €750Bn Recovery & Resilience Plan, and Brussels are not impressed with the shenanigans going on in Italy. Meanwhile, the European Central Bank is doing its best to support Italian government bonds (Exhibit 2) which, at the long end, are now yielding about 1.7% more than they did a year ago (Exhibit 3). Investors do not seem very impressed and have, as a result, begun to demand a significant risk premium. 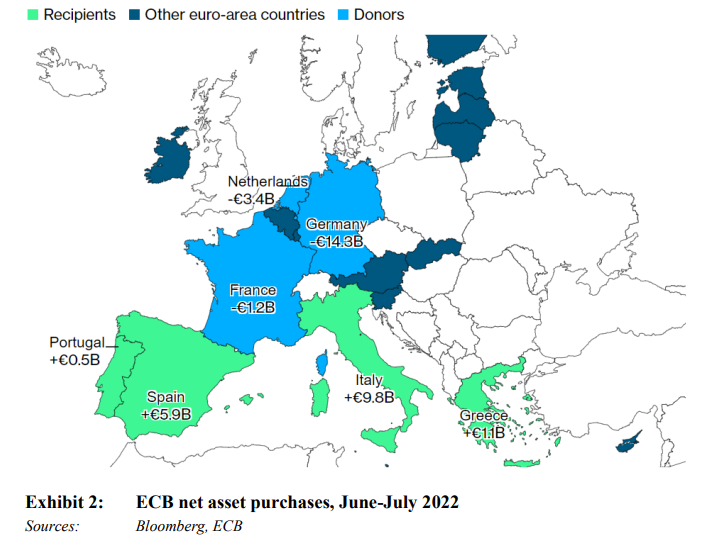 Is this happening at the worst possible time?

All these problems come at the least appropriate point in time. As you will be aware, Russia’s invasion of Ukraine has led to much higher gas prices in Europe, and gas accounts for almost half of all electricity production in Italy. Of all the gas consumed in Italy, one-quarter of it comes from Russia, meaning that not only is the Italian economy affected very negatively by high gas prices; it will also be badly impacted, should Putin switch off Russian gas supplies to Europe next winter. The only good news, I suppose, is that Italy have, in only a few short months, managed to cut its dependence on Russian gas from 40% to 25%. 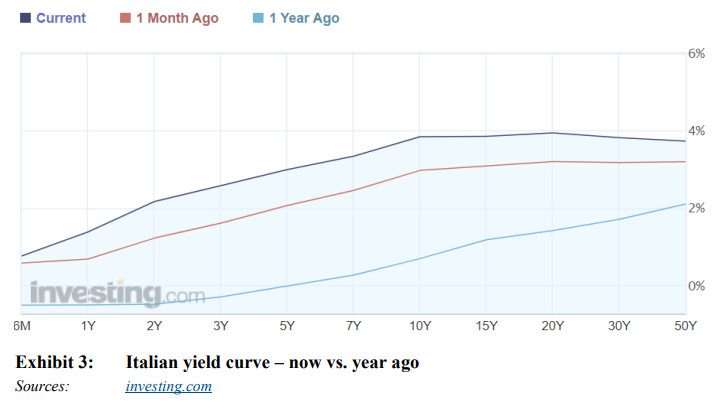 On a much more upbeat note, despite the abrupt rise in Italian government bond yields, the cost of servicing the sharply rising government debt has only risen modestly so far (Exhibit 4). There is a simple reason for that. At the short end, Italy enjoyed negative interest rates for an extended period of time, but the treasurer largely withstood the temptation to finance (and re-finance) at the short end of the curve. Now, with rates being much higher, much debt has been financed (and re-financed) at the long end of the curve at a comparatively low cost, meaning that Italy will benefit from this for many years to come. 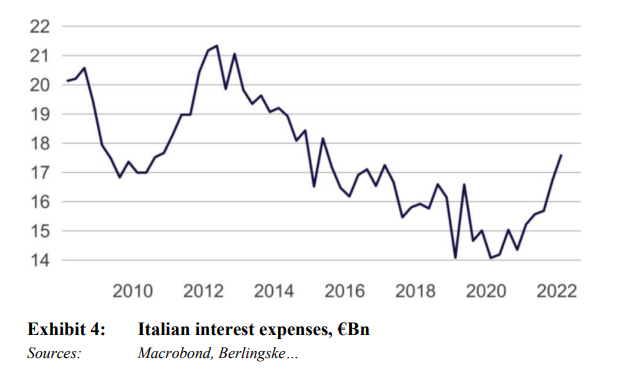 In the summer of 2018, I wrote an Absolute Return Letter called The Italian Job (which you can find here). In that letter, I argued that Italy is facing five major problems, namely: 1. high government debt; 2. consistently low productivity; 3. a large shadow economy; 4. a rapidly ageing populace; and 5. its proximity to North Africa (refugees).

Although there is little one can do about issues #4 and #5, the other three should be dealt with as soon as possible. Otherwise, Brexit could be followed by Italexit. That said, it will be a major challenge to drum up the appetite required to restructure as much as Italy needs to restructure.

Therefore, four years after I first wrote about the challenges facing Italy, I can only conclude that an Italian financial accident of some sort is still on my radar screen. Even more worryingly, it has probably moved a fair bit closer. Having said that, at least for now, Italexit is not on my menu of things to worry about. The masters in Brussels do not want it to happen, and neither do the naughty boys in Rome, even if they sometimes pretend to.

Essentially, it goes back to the point I made earlier, i.e. the need for technocrats to come to the rescue every now and then and sort out the mess created by the populists in Rome. Therefore, Italy needs the EU, even if the Italians won’t admit it. The EU, on the other hand, do not want another exit. They fear that could create an uncontrollable avalanche, i.e. the bureaucrats in Brussels will do their utmost for it not to happen. Thus, in reality, neither side wants Italexit to happen and, therefore, it won’t happen. Famous last words?

One final point before I finish. The leader of Fratelli d’Italia, Giorgia Meloni, will most likely become the next Prime Minister of Italy. Founded in 2012, Fratelli d’Italia has its political roots in the Italian Social Movement (MSI), which rose from the ashes of Mussolini's fascism (source: BBC). In other words, a sharp turn to the right is the likely outcome of the September 25 elections. How that will go down in Brussels and in the rest of the EU remains to be seen, but expect plenty of drama in the months to come.

Some Straight Talk About the Debt Crises

Congress has passed the Inflation Reduction Act. President Biden says this is a success story, in part because it will reduce the deficit by $305 billion over the next... Read More

Bank of America is anxious about the effects Brexit will have on corporate America and, as a result, the bank has downgraded its S&P 500 earnings forecast for 2016... Read More