Generic pharmaceutical manufacturer Actavis Inc (NYSE:ACT) made headlines yesterday after confirming that it has entered into early stage discussions with Ireland based pharmaceutical firm Warner Chilcott Plc (NASDAQ:WCRX) over a possible merger of the two companies. It is worth noting that Actavis is a generics giant but the latest target of this acquisition-hungry machine is a specialty player. Actavis was known as Watson Pharmaceuticals until October last year and has made a number of acquisitions since then, following the big ticket Swiss buyout which resulted in Watson adopting the Actavis name on a global basis. Both companies have however declined to comment or offer more details about the talks.

Understandably, the whiff of talks has fueled stock prices of both companies. Shares of Warner Chilcott Plc (NASDAQ:WCRX) closed with a nearly 20 percent jump on Friday while Actavis also gained in double digits. Warner Chilcott is a strategic fit for Actavis Inc (NYSE:ACT) as the latter has been looking to bolster its presence in the branded drug space and improve its tax structure. Warner Chilcott offers both with its portfolio, which includes women's health and dermatology products. While it is a strategic fit, one should take stock of the fact that Warner Chilcott’s shares were undervalued while promising strong growth. Even now, shares trade at a price earnings multiple of 11.3 which is not very high for a debt free company. Although its sales declined 13 percent during the first quarter to $578 million, profits of $113 million remained at same level that of first quarter last year, indicating robust margins. The only concern with this stock is that the rally has probably played out completely with limited upside potential now.

Actavis’ interest in Warner Chilcott Plc (NASDAQ:WCRX) has once again revived the quest for solid undervalued plays in the pharmaceutical industry. Actavis Inc (NYSE:ACT) itself remains undervalued by some standards. Given its paced approach in acquiring profitable businesses, a forward earnings multiple of 12.8 is slated to come down significantly over the next couple of quarters once the company starts reporting consolidated numbers free of acquisition charges. Earlier this month, the company reported a 24 percent jump in first quarter revenues to $1.9 billion, underlined by a 254 percent surge in international revenues to $608.6 million. Increased costs and charges related to merger and acquisition expenses resulted in a net loss of $102.8 million for the quarter but its operating margin of 11.4 percent for the trailing 12 months speaks of itself. Going forward, Actavis is likely to continue with its aggressive acquisition strategy but with a focus on targets with better margins. In this context, a debt equity ratio of 1.72 sits in a comfortable zone – not very low but not prohibitively high as well.

Endo Health – the other undervalued stock

Endo Health Solutions Inc (NASDAQ:ENDP) is the kind of pharmaceutical company competitors would be interested in acquiring. At a forward price earnings ratio of 8.9, the stock remains undervalued and while the latest quarterly results did not set the street on fire, most analysts still have positive rating on it, albeit with lower price targets. The company generates roughly 25 percent of its revenues from generic drugs while more than half of the top line was contributed by branded drugs in the most recent quarter. The stock has come under pressure after the company missed revenue expectations in the first quarter results, although the profit of $15.3 million was largely in line with street estimates. More importantly, a recent FDA decision not to block generic versions of Endo Health’s generic pain killer Opana ER would shave $120 million from its annual sales projections. However, these negatives have been factored into the stock price after a 7 percent drop last week.

Actavis Inc (NYSE:ACT) represents generic drugmakers looking to boost their size through acquisitions. This strategy works initially but sooner or later companies realize there are limitations and then the focus turns on boosting profitability through specialty plays, This makes companies like Endo Health Solutions Inc (NASDAQ:ENDP) better takeover candidates. 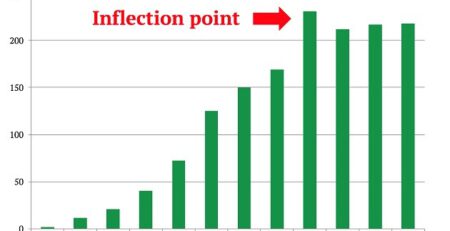 Despite the headwinds now facing the global economy, the S&P 500 rallied 1.5% last week, near to an all-time high. However, despite this rally, according to Bank of America’s flows data,... Read More