A group of alternative hedge fund strategies performed positively towards the end of 2013 and may be positioned for a less predictable market environment in 2014.

While the S&P 500 index closed above 27% on the year, alternative strategies generally exhibited sub-par performance. The Barclay Hedge Fund Index was up 11.79%, while the Fund of Funds index was 8.78%.  Compare this with a few hedge funds positioned to potentially capture what might be a very different market environment for equities in 2014.

Contrarian Capital’s flagship Capital Fund I was up just over 17% in 2013.  The fund invests in distressed opportunities, such as bank debt, debt backed by real estate, senior bonds, trade claims, direct “rescue” financing.  This type of strategy is more based on the ability of the investment manager to select appropriate distressed debt than it is based on positive performance in the equity markets.

A report in Institutional Investor provided a look at one of Contrarian’s trade types. In late 2005 commodities broker-dealer Refco went bankrupt after it was discovered its CEO had hidden $430 million in bad debt.  The firm declared bankruptcy and Contrarian would purchase the bankruptcy claims of creditors who didn’t want to wait around to collect on the claims.  The seller of the claim typically settles for less than the claim’s perceived market value, but gets the benefit of immediate access to capital and elimination of any uncertainty about if or when the bankruptcy claims will be paid. The Contrarian fund was nominated for Absolute Return’s 2013 Awards as well as Institutional Investors hedge fund awards.  Other notable funds in the distressed debt include Paulson’s Credit Opportunities fund, up close to 20% in 2013; Silver Point Capital Offshore, up near 15% in 2013; and Strategic Value Restructuring Fund, up near 16% in 2013, based on HSBC’s Hedge Fund Weekly Performance Review.

Amici Capital is a global long short equity fund operated by Alex Porter and Paul Orlin with $1.8 billion invested in the fund. Orlin was a former Goldman Sachs Group Inc (NYSE:GS) risk arbitrage manager and worked with Walsh, Greenwood before starting Amici with Porter. Porter worked on the NYSE as an investment analyst before joining A.W. Jones as a portfolio manager until moving to Sanford Bernstein in 1972.  Although it underperformed the BarclayHedge Long / Short index in 2013, generating 6.13% return YTD while the index generated 15.41% YTD, it outperformed the index in 2012 and 2011 – a negative year for many long / short funds.  Other notable 2013 performers in the Global long / short category include the Passport Special Opportunities fund operated by John Burbank, with 38.97% reported returns; and the Standard Pacific Capital – B Class, operated by Doug Dillard and Raj Venkatesan, with 16.77% reported performance.

As analysts have noted that 2014 may be a different and unpredictable market for equity returns, this might be the year to consider programs not entirely correlated to the stock market.

With all its recent activities, the Federal Reserve’s balance sheet has exploded to $5 trillion-plus. My friend Peter Boockvar thinks assets could easily reach $10 trillion, and problems will develop when they try... Read More

Bill Miller: Apple's Cheap But This 'Arctic Apple' Stock Is The One To Watch

Hugh Hendry’s bad luck in his Eclectica hedge fund this year ended in May. The Eclectica Absolute Macro Fund finished last month with a slight gain of 0.3%, bringing the YTD... Read More

39% Of Stocks Have A Negative Lifetime Total Return 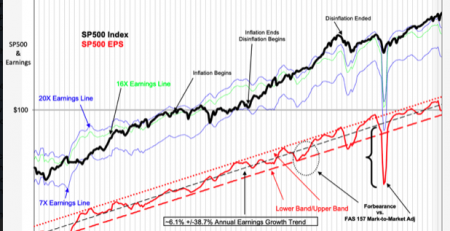