Ariel Investments’ portfolio commentary for the month ended May, 2014.

The U.S. stock market has performed erratically in 2014. For instance, both the S&P 500 and the Russell 2000 fell more than –2.5% in January but recovered to gain more than +4.5% in February. In April, the large-cap S&P 500 gained +0.74%, while the smallcap Russell 2000 lost –3.88%. It was tough to tell what the market was saying earlier this year, but now it is becoming more clear. While equity investors do not seem to think the economy is contracting, their confidence in the economic recovery’s power has
wavered.

Sometimes, the way stock indexes perform delivers a clear picture of economic expectations. For instance, in expansions, small companies generally grow faster than large companies, and obviously, when the economy is growing, investors’ expectations for more expensive, faster-growing companies rise. When investors are confident in the economy’s expansion, as in 2013, the rising tide lifts all boats, with small-growth stocks likely to top large-value stocks. Indeed, in 2013, small topped large, and growth trumped value. The Russell 2000 Growth Index surged +43.30%, while the Russell 1000 Value Index gained a still-stellar +32.53%. When recession is expected or ongoing, you often get the reverse, with little-growth companies getting pummeled and cheaper large caps typically dropping by a smaller amount.

The market’s mood in 2014 is neither ebullient nor morose. We would characterize it as cautiously optimistic overall—with caution popping up in some ways and optimism appearing elsewhere. Below are the returns of the stocks in the all-cap Russell 3000, divided into quintiles by size and price-to-earnings (P/E) ratio.

As you can see, by market cap, the results are what statisticians call monotonic: The largest market cap quintile beat the second quintile, which beat the third, down to the bottom. When separated by P/E ratios, the results are slightly less tight but still clear: Cheaper stocks outperformed more expensive fare, with the second quintile being slightly out of order. Note, however, that size has been significantly more important than price. When divided only by P/E ratio, all five quintiles posted gains, signaling overall optimism. When divided by market cap, the two top quintiles had nice gains, but the bottom three had negative returns. Taken altogether, stock returns suggest investors expect companies to keep growing, but they have become more cautious and are “hedging their bets” on smaller-cap companies while sticking to larger companies.

This story hits home for our portfolios in an interesting way. That is, when we examine the style-specific Russell indexes, investors’ nuanced preferences create a sharp dividing line between mid-caps and small/mid-caps.

As you can see, mid-caps and large caps are behaving similarly, while the stocks in the Russell 2500 indexes are in between, but then a bit more like small caps. Moreover, 400-basis-point gaps separate each Russell Midcap Index from its respective Russell 2500 counterpart. This is an unusually large gap. Going back as far as possible to February 1, 1986, the median five-month return distance between the Russell 2500 Value and the Russell Midcap Value Indexes is just 32 basis points. The recent 403-basis-point gap between these benchmarks is the 18th largest gap for such a period, or just outside the widest 5% spreads.

This unusually large disjuncture creates a conundrum for our shareowners, because our mid-cap and small/mid-cap portfolios do not show this same disparity. Year-to-date, our small/mid-cap Ariel Fund has fallen –0.41%, while our mid-cap Ariel Appreciation Fund has dropped –0.22%. Our highly focused, Warren Buffett-style portfolios often perform similarly, but this year, that means one has lagged by about 400 basis points while the other has trailed by more than 700. It is the distance between their benchmarks, however, and not the performance differences between the portfolios that are driving the relative performance disparities. Given this overall mood, our portfolios have underperformed for understandable reasons. Utilities and dividend-heavy real estate investment trusts (REITs), which we do not own, have done well. Meanwhile, consumer discretionary stocks and asset managers (heavily weighted in our mid-cap portfolios) have fared poorly.

Shareholder Concentration: A Force For Good?

Is Shareholder Concentration a good or bad thing? One of the key arguments against passive investing is the lack of influence shareholders have on the actions of company management. The argument... Read More

Hutchin Hill, famous for bagging the other side of the London Whale trade, was up 3.83 percent in Q1 after adding a 0.95 percent return in March. The programming... Read More 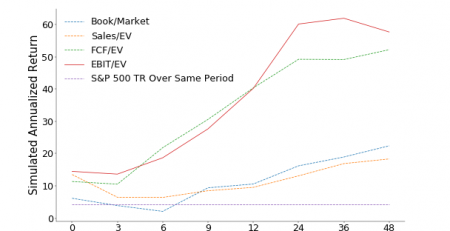 Over the last three years, Euclidean has engaged in an intense research and development effort to assess whether the great advances in machine learning achieved in the past decade... Read More

Is Bigger Always Best? A Closer Look At Effect Of Size On Hedge Funds

Is Bigger Always Best? A Closer Look At Effect Of Size On Hedge Funds by Preqin Using Preqin’s new fund size benchmarks on Hedge Fund Analyst, together with the results... Read More