Australian Mining Companies Dig In For The Long Haul

Signs of cooling demand for commodities from China have not deterred Rio Tinto from sticking with its plans to boost iron ore production in its annual production forecast, though plans for a few other commodities have been trimmed.

Rio Tinto plc (NYSE:RIO) (ASX:RIO) (LON:RIO) confirmed that its expansion of Western Australian iron ore operations was proceeding on track, and that its guidance of 250 million metric tons production of iron ore . . .

Dr. Michael Burry is the physician turned money manager and founder of Scion Capital LLC, his hedge fund which he ran for eight years. However, before Burry went into... Read More

Below is an overview of some of the major value investors and hedge funds based on their 2013 fourth quarter 13F SEC Filings. These filings mostly cover equities and... Read More

Hindsight Is A Wonderful Thing Quiz; Pull Your Head Out Of The Sand [Part Two]

Here are the answers to the somewhat astonishing quiz, published on the Fisher Investments blog on June 12 2007. Take the quiz here: Hindsight Is A Wonderful Thing Quiz: Financial... Read More

March was the worst month ever, but April was the best in 9 years says legendary credit fund manager Mitch Julis

March was a difficult month for many months as uncertainty around the coronavirus peaked. For Canyon Partners, it was the worst month in its 30-year history. On the flip... Read More 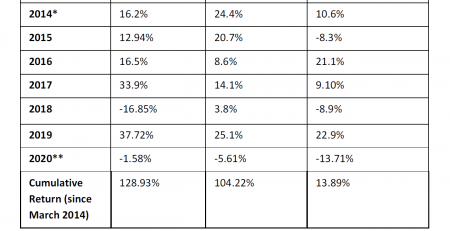 Risk premia investment strategies, along with other alternative strategies, have gained popularity recently, even though they don’t outperform stock picking. A detailed report from Societe Generale quants gives an... Read More

Rick Guerin’s Rise, Fall And Rise As An Investor

In his now-famous essay, The Superinvestors of Graham-and-Doddsville, Warren Buffett highlighted the careers of six (seven including himself) highly successful value investors. The piece was written to show readers... Read More