In a surprise move, the Bank of Japan (BOJ) has decided to add 10 trillion yen ($130 billion) to its asset buying and lending scheme. The central bank has said that it will increase its asset purchase programme from 55 trillion yen to 65 trillion yen, and the entire increase will be earmarked for the purchase of long-term Japanese government bonds.

Valuation Of Precision Castparts Corp. (PCP) by Dr. David Kass, University of Maryland Get The Full Warren Buffett Series in PDF Get the entire 10-part series on Warren Buffett in PDF.... Read More

Why A Checklist Is An Investors Best Friend [Part Two]

This is part two of the on going series on, "why a checklist is an investors best friend." Part one can be found here. Developed in the fields of medicine and... Read More

45 Percent Of Americans Spending More Than They Did Last Year

As unemployment trends downward, attention has turned to wage stagnation this summer as analyst wonder what will happen if we get back to full employment but people don’t feel... Read More 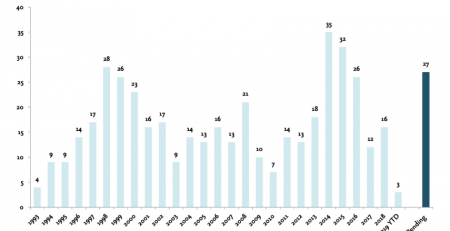 Carlson Capital's Black Diamond Arbitrage Partners fund returned 1.62% net of fees for investors for the first quarter of 2019. According to a copy of the fund's first quarter... Read More

Despite rising gold prices and good market conditions, gold companies burned through $11 billion in cash over the last decade, leaving shareholders out in the cold. The failure to... Read More

Do The BLS JOLTS Number Suggest A Peak?

About this time every month, the Bureau of Labor Statistics (BLS) releases its accounting of what is known as the Job Openings and Labor Turnover Survey (JOLTS). The JOLTS and... Read More