Though loonies had a tough day yesterday on moves in the bond market, this morning we are seeing them recapture those gains following a late day rally in oil and bond markets trading in sync.  Retail sales are out by the time you are reading this (see below), and that is a series that has the potential to move the dollar.

Equities are continue to gain, with London stocks clawing their way into the green for year-to-date returns, and posting 13% gains since the February lows.  It seems that Brexit is not a huge concern for investors when measured over a longer term.

On the short-term however, it is having a meaningful impact on the FX markets. Liquidity and participation levels are low, with most positions reduced in the run-up to the referendum. Given the size of the event risk, money managers with an angle for risk management largely have little exposure.

The good news is that there is just one more day of polls and surveys. This is the final full day of campaigning ahead of the referendum. We’re seeing a continued swing back into the remain camp. With the decision being so close, most cautious investors will stay in the ‘wait and see’ camp.

Josh Brown shows an interesting chart showing the newsworthiness of ‘Brexit’ vs Grexit and the Scottish Referendum. It’s off the charts, and likely to fade just as quickly.

Andrew Ross Sorkin, writing for the New York Times, asks Why is Uber raising so much money?  With its latest debt deal, Uber has raised more tha U$15 billion from investors – with its most recent value pegged at $68 billion.

In managing client portfolios, we constantly run into new securities and ways to achieve investment goals.  But is it too much?  Barry Ritholz asks if Wall Street is creating too many products.  Mr. Ritholz is a long-time advocate of keeping it simple, which certainly has its merits, but we would also argue that constantly changing tax rules spawns new products – some of which should not be ignored.

Tyler Cowen, noted economist and author of the Marginal Revolution blog asks:  Why isn’t more economics taught in high school?  We would argue personal/household finance should go first, but are keen to know the real answer as well.

Yellen was in front of congress yesterday, she sees near-term and long-term factors clouding the Feds outlook. The probability of a hike in July has fallen to just 8% from close to 50% at the beginning of the month. Oh, how have things changed. See the roller coaster of a ride in our Chart of the Day.

US Treasuries were relatively flat yesterday after the market digested Janet Yellen’s testimony. It would not be surprising to see similar action in the Treasury complex today. Market participants are in “wait and see” mode ahead of the key events mentioned above. That said, investors may choose to move into Treasuries in advance of the vote, just in case it does not go as planned. More from CNBC here.

Morgan Housel from the Motley Fool has compiled a great collection of five-word financial advice for those graduating high-school right now. With just five words, they are all perfectly tweetable.

McDonald’s is buttering up their Egg McMuffins switching from margarine. The move should improve efficiencies in their business and speed things up on the production line throughout the day. This comes as competition heats up from competitors at Yum Brands (Taco Bell) and QSR (Burger King) who have ramped up marketing efforts around their breakfast menu. Encana is selling their Gorondale monteny assets for $488mm to Birchcliff Energy for $625mm. These are mostly natural gas producing assets. Syncrude is restarting deliveries to Fort McMurrary after going offline since the wildfires which started last month. Rio Tinto has signaled they might be looking at a massive spinoff, much like what BHP recently did with their coal business.

Gold prices are flat this morning holding the lows of yesterday and over the past two weeks as the betting odds move in favor of a Britain remaining in the Euro. The chances are now only 25% that they will leave. Prices are still up nearly 19% this year after the FED raised rates in mid-December. Copper is catching a bid this morning as the dollar is weakening ahead of the Brexit vote tomorrow. Oil prices are back up above $50 this morning as the glut is perceived to be shrinking in the U.S. Inventories fell 5.2mm barrels last week. However, the glut still remains 100mm barrels above the five year average.

Canadian retail sales started Q2 on a good note with April receipts rising by +0.9% to exceed the +0.8% expectation and rebound from the -0.8% decline prior. It’s a nice reversal for the consumer that sees year-to-date sales higher by +5.3% thus far in 2016. Core purchases were even better with a +1.3% gain during the month that also reversed a drop in March. Almost every big-weight category showed improvement with the furniture/home furnishing (+6.1%), building materials (+1.6%), food (+0.1%), and general merchandise (+1.3%) areas all higher. Laggards included clothing (-2.7%), sporting goods (-0.9%), new cars (-0.5%) and electronics (-0.3%) purchases. Regionally, every province reported higher consumer receipts save for Manitoba whom declined by -0.9%. Overall a good report, that while lagged, at least helps to add to the rosy picture displayed by last month’s employment numbers. Loonies are accelerating their gains from prior, trading to 1.2745 against the greenback for a near 1% gain from yesterday’s close.

Electricity generator and supplier Bruce Power L.P. came to market with their first ever bond deal earlier this week by way of a combined $1 billion two tranche senior unsecured deal. The $600MM in 5 year bullet notes priced at +215.9 bps over benchmarks for a 2.844% coupon while the $400MM 10 year bond came in at +275.0 bps over Canada’s for a 3.969% coupon. The Scotia and TD-led offerings were well received and traded six and four bps tighter on the break in secondary markets. The notes are rated BBB by DBRS and Baa2 by Moody’s. Note that the issuer had originally sought just $500MM in financing but managed to raise double that amount — underscoring the demand for paper in that space and also denoting the dearth of new issues in the market. Proceeds of the deals will be used for component replacement at the operator’s reactors.

The graveyard is full of indispensable people. – Brad’s Grandfather

From our perch in Middleburg it looks to us like the market continues to absorb the often unpleasant news from around the world. Every so often the market has... Read More

Croatia Joins the EU: A Look at the Local Economy

Croatia became the 28th member of the European Union at midnight on Sunday, passing a milestone in its recovery from war but anxious over the troubled state of its... Read More 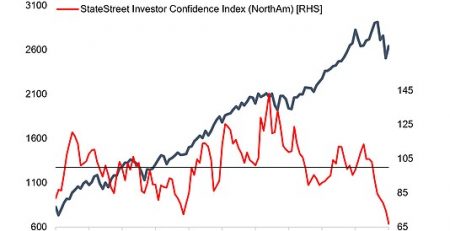 Just as Moody’s lowered its outlook for asset managers to negative, Bank of America Merrill Lynch is calling the current scenario the “poorest environment for active managers in history.” “Markets... Read More