The leaders of the BRICSs countries agreed Tuesday, July 15th, to set up a new development bank aimed at financing infrastructure projects in the founding members of Brazil, Russia, India, China and South Africa and other emerging-market countries as well.

The reserve fund and Shanghai-based development bank are seen as alternatives to Western-led institutions.
A new world bank
As reported earlier, the leaders of BRICS countries are in meetings ending July 17 to weave together plans to create a $100 billion bank to compete with the World . . .

David Einhorn's Greenlight Masters fund of funds was down 3.3% for the third quarter, following declines of 1.1% and 2.4% for July and August, respectively, and a gain of... Read More

Dividend Growth: What Should You Expect in 2016?

The tallest tree in the world towers over the Earth at nearly 370 feet in height. The tree is part of Redwood National Park in California and is estimated... Read More

Trian/Dupont: Trian’s proxy fight at Dupont was significant on many levels. While viewed by many as a “loss” for Trian, it actually showed how far activists have come. Trian... Read More

The Last Deep Value Stocks In The World?

With the current equity bull market now in its 10th year, the number of opportunities out there for deep value investors is extremely limited. Indeed, a quick screen of the... Read More 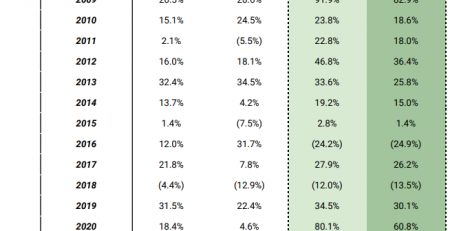 Trend following CTA strategies could run into problems in the second half of 2017, according to hedge fund strategy analysis from Credit Suisse's prime brokerage unit. Of the 21... Read More

TeleCommunication Systems, Inc. (TSYS) Write-up by Troy Marchand Get The Full Warren Buffett Series in PDF Get the entire 10-part series on Warren Buffett in PDF. Save it to your desktop,... Read More

Paul Novell – Meet The Quantitative Investor That Retired At 41

Paul Novell - Meet The Quantitative Investor That Retired At 41 by Tim du Toit, Quant Investing When I first started following Paul’s blog I could hardly believe what he achieved. He... Read More