AMC yesterday, Bridgepoint Education Inc (NYSE:BPI) announced that its reapplication has been accepted and Ashford University has received a 5-yr grant of accreditation from the Accrediting Commission for Senior Colleges and Universities of the Western Association of Schools and Colleges (WASC).

With WASC accreditation in place, the risk of students losing access to federal aid and loans (which could have been a death sentence) is largely eliminated says Peter P. Appert, CFA Sr. Research Analyst, Piper Jaffray & Co.

Particularly impressive was WASC commentary noting that Ashford has been “fundamentally transformed,” with improved focus on student retention and success. The final report will be available shortly at www.wascsenior.org.

Continued quality improvement initiatives will force Ashford to incur additional operational costs, but increased certainty that Ashford will retain Title IV eligibility and the school’s ability to transition away from its current accrediting agency (the Higher Learning Commission or HLC) should elevate a meaningful overhang that has pressured the stock since its initial WASC denial was made public on July 9, 2012 says Jarrel Price of Height Analytics.

However, others are less optimistic.

With its accreditation news, Bridgepoint Education Inc (NYSE:BPI) provided 2Q expectations for revenues of $195.5-199.5m based on enrollment of 71-72K vs our expectation for $208m and 71.5K, respectively. Consensus for 2Q revenue is currently $205m. At Barclays current new enrollment estimate of -45%, which is in-line with 1Q, and flat persistence, guidance implies much worse revenue per student declines of 4 to 6% YoY vs  the firm's 0% projection. Clean EPS guidance, adjusted for a $6.2m / $0.07/share charge, is in the range of $0.23-0.27 vs Barclays and the Street’s $0.34 estimate.

O Wage Inflation, Where Art Thou? by Shane Obata and Richardson GMP. The labor markets have been improving steadily since th­e financial crisis. Some people would argue that the US... Read More

Thornton O'Glove: "Quality of Earnings" | Talks @Google Published on Jul 8, 2016 In this talk, Thornton covers a wide range of investing topics, including the art of financial deviation analysis,... Read More 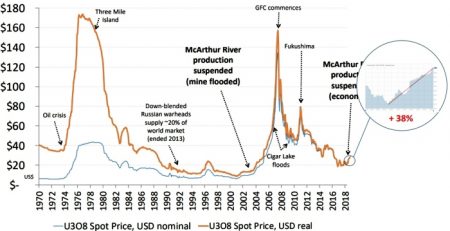 A Look At The Uranium Market

Last night, I had drinks with my good buddy Mike “Mr. Uranium” Alkin. As you can guess, we talked a lot about Mike’s favorite topic; uranium. Q2 hedge fund letters,... Read More