Bronte Capital Management founders John Hempton and Simon Maher first started putting together seeding deals in in 2008, but as they explain in their final investors’ letter that came out this week, the deals dried up by 2009 and they were forced to find another way to bring in capital. Fortunately a wealthy Bay Area investor, ‘Joe’, decided to invest in a separately managed account and that became the reference US account that Bronte has reported on until now.
First account closed to buy a ranch after quadrupling in . . .

While it is not often publicly vocalized, one motivation to take a company public through an IPO is to cash in during strong IPO “market environments” while transferring risk... Read More

Investors appear to have been quite with today’s BLS employment report.  The seasonally adjusted employment growth figure came in at +203K.  The unemployment rate also came in lower by... Read More

The main headlines from Mary Jo White’s Congressional testimony yesterday centered around her saying the markets were not “rigged,” yet several little known sentences could potentially lead to a... Read More

As an increasingly uncertain French election approaches – with the communist candidate now garnering 18% of the vote, according to polls out this weekend – Moody’s is out with... Read More 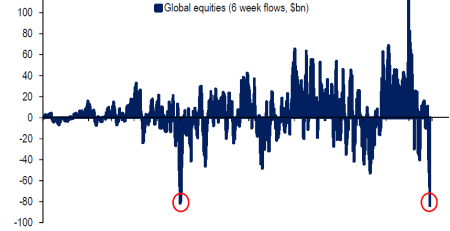 Everyone Else Is Selling Stocks, So Is It Time To Buy?

After a difficult few trading days in the beginning of the year, U.S. stocks are bouncing back with meaningful gains on Monday following Friday's strong rally. The S&P 500,... Read More

Why The Real Shadow Banking Risks Are In The US And Europe, Not Just China

Why The Real Shadow Banking Risks Are In The US And Europe, Not Just China by Dan Steinbock, Difference Group Dan Steinbock says the world’s shadow banking has returned to... Read More

North American quantitative fund managers have been positive in nine out of 11 monthly major risk events, a EurekaHedge report noted. The volatility of these quant funds was generally... Read More

Apple Defends Itself On Tax Allegations

Apple Inc. (NASDAQ:AAPL) has made a statement defending itself against allegations of avoiding tax in the United States. The statement comes after an article in the New York... Read More