Buffett – FORTUNE — “Investment is most intelligent when it is most businesslike.” –Benjamin Graham, The Intelligent Investor

This tale begins in Nebraska. From 1973 to 1981, the Midwest experienced an explosion in farm prices, caused by a widespread belief that runaway inflation was coming and fueled by the lending policies of small rural banks. Then the bubble burst, bringing price declines of 50% or more that devastated both leveraged farmers and their lenders. Five times as many Iowa and Nebraska banks failed in that bubble's aftermath as in our recent Great Recession.

In 1986, I purchased a 400-acre farm, located 50 miles north of Omaha, from the FDIC. It cost me $280,000, considerably less than what a failed bank had lent against the farm a few years earlier. I knew nothing about operating a farm. But I have a son who loves farming, and I learned from him both how many bushels of corn and soybeans the farm would produce and what the operating expenses would be. From these estimates, I calculated the normalized return from the farm to then be about 10%. I also thought it was likely that productivity would improve over time and that crop prices would move higher as well. Both expectations proved out.

I needed no unusual knowledge or intelligence to conclude that the investment had no downside and potentially had substantial upside. There would, of course, be the occasional bad crop, and prices would sometimes disappoint. But so what? There would be some unusually good years as well, and I would never be under any pressure to sell the property. Now, 28 years later, the farm has tripled its earnings and is worth five times or more what I paid. I still know nothing about farming and recently made just my second visit to the farm.

This week's events bring us to India, a country which rarely makes headlines for activist campaigns, but where shareholder engagement has been building up for quite some time. Get The... Read More

Dividends are the investor's best friend. While companies such as Berkshire Hathaway, Amazon and Google eschew dividends in favor of reinvesting capital, there's no denying that for the rest of... Read More 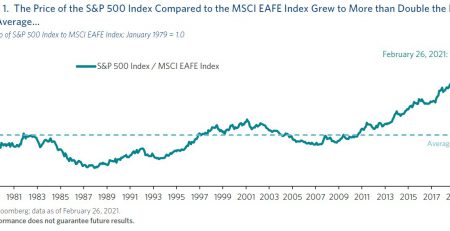 Predicting Stock Market Returns Using The Shiller CAPE by StarCapital Literature on CAPE Over the past 100 years, US stocks realized real capital gains of 7% per annum. No other asset... Read More