Bull Market: A Warning from Graham and Dodd – ValueWalk Premium

Interesting piece whether you agree or not, below is a brief excerpt

“During the latter stage of the bull market culminating in 1929, the public acquired a completely different attitude towards the investment merits of common stocks… Why did the investing public turn its attention from dividends, from asset values, and from average earnings to transfer it almost exclusively to the earnings trend, i.e. to the changes in earnings expected in the future? The answer was, first, that the records of the past were proving an undependable guide to investment; and, second, that the rewards offered by the future had become irresistibly alluring.

“Along with this idea as to what constituted the basis for common-stock selection emerged a companion theory that common stocks represented the most profitable and therefore the most desirable media for long-term investment. This gospel was based on a certain amount of research, showing that diversified lists of common stocks had regularly increased in value over stated intervals of time for many years past.

“These statements sound innocent and plausible. Yet they concealed two theoretical weaknesses that could and did result in untold mischief. The first of these defects was that they abolished the fundamental distinctions between investment and speculation. The second was that they ignored the price of a stock in determining whether or not it was a desirable purchase.

“The notion that the desirability of a common stock was entirely independent of its price seems incredibly absurd. Yet the new-era theory led directly to this thesis… An alluring corollary of this principle was that making money in the stock market was now the easiest thing in the world. It was only necessary to buy ‘good’ stocks, regardless of price, and then to let nature take her upward course. The results of such a doctrine could not fail to be tragic.”

Fourteen years ago, the S&P 500 reached what still stands as its most overvalued point in history. At the time, on the basis of a variety of valuation measures, we projected negative 10-year total returns for the S&P 500 over the following decade, even under optimistic assumptions. The general arithmetic behind these estimates is detailed in Ockham's Razor and the Market Cycle. The ratio of market capitalization to GDP reached 1.54 in 2000, which also offered a reasonably good indication of likely prospective total returns for the index over the decade to come. A fairly simple rule-of-thumb using market capitalization to GDP is presented in The Federal Reserve’s Two Legged Stool. In 2000, that rule-of-thumb estimate of prospective S&P 500 10-year nominal annual total returns would have been:

As is generally the case over time (though not always over short horizons), these estimates worked out swimmingly. By 2010, even after an 80% rebound from the March 2009 low, the S&P 500 had still posted a negative total return from its 2000 peak. 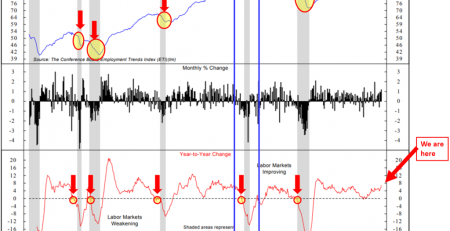 Crashes are never caused by poor earnings or lower economic growth. Those things cause recessions, but they do not cause crashes. One thing, and one thing only, can cause a crash: forced selling

“Crashes are never caused by poor earnings or lower economic growth. Those things cause recessions, but they do not cause crashes. One thing, and one thing only, can cause... Read More

Despite good figures in the North American market, Diageo plc (ADR) (NYSE:DEO) (LON:DGE)’s half-year results in January were weaker than expected and it’s not surprising. In the emerging markets,... Read More